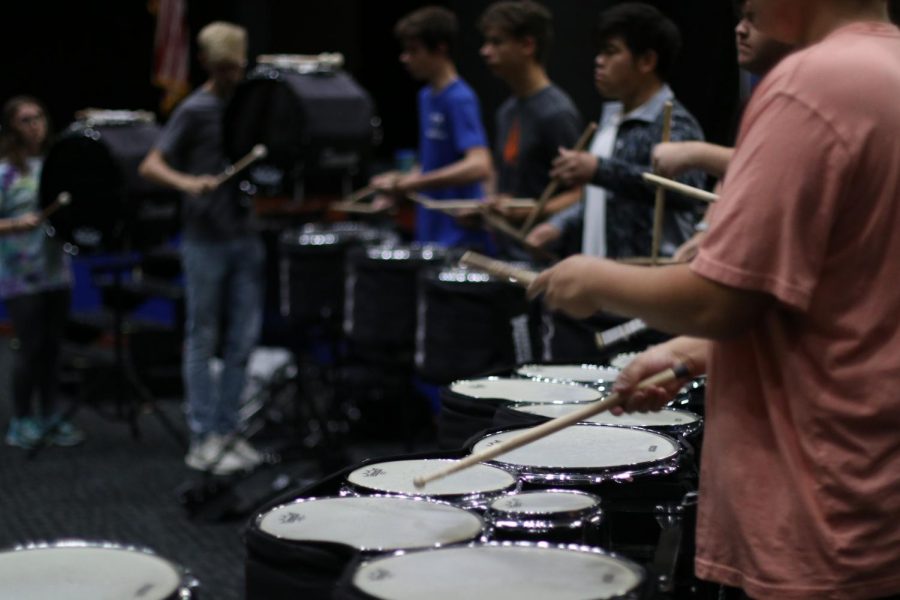 Drumline rehearses before school in the auditorium due to bad weather.

Percussion is performing at the Lone Star Classic Drumline Competition on Nov. 9 at 8:36 p.m. at the Marcus Marauder Stadium.

“There’s a lot more groups – bands come from all over Texas to go, so there’s a lot more competition,” Witten said. “It’s also a challenge because there’s so much time in between the competitions – people get really burned out with the music, but everyone really wants [to win]. Rehearsals have been getting better, and I think everyone’s starting to understand that it’s so much better to be proud of all the hard work you’ve done and get the results you want instead of looking back and thinking, ‘Man, I really wish I had worked harder during rehearsal.’”

The percussion show is titled “1001 Nights” and features music from “Game of Thrones” as well as challenging marimba pieces called “Drift” and “Udacrep Akubrad.”

“It’s really fast paced and has a lot of ethnic-sounding scales – think ‘Aladdin’ and ‘Arabian Nights,’” Witten said. “It’s a really cool show and fun to listen to and it’s really, really challenging too – probably the second most challenging show we’ve done. I can’t wait to see how much better our freshmen will be in a few years after starting off with such a hard show.”

Percussion learns its drumline show in addition to being a part of the marching band show every year. Witten said there’s more pressure on the percussion section in the marching show this year because the band is competing at the Bands of America Grand Nationals Championship Nov. 14-16 and the show features the percussion with a minute long drum break in the show.

“It is a struggle because, naturally, the competition where there’s more focus on you individually is going to be a priority for a lot of us, but then we also have that obligation that we are a part of the band,” Witten said. “Most years, we’ve all internally cared about the drum show more than the band show because it has such a big focus on the winds. This year, though, there’s more at stake because of going to Grand Nationals and having the drum feature, so that attention on us has really gotten us going and we’re pushing hard to be equally successful in both shows.”

Percussion students have to juggle learning two shows, All-State audition music and their classwork while having rehearsals before and after school. Witten said the cool thing about having to practice so much is that the section is really close.

“We are all really tight because we’re always together,” Witten said. “Even if it’s late, we’re always like, ‘Hey, let’s go hang out, let’s go eat’ and we’re always planning things to do together because we’re all each other’s best friends. I just think it’s a really fun environment when everyone’s tight with each other because then you play music better. It’s such a tight listening environment. It’s cool to actually be really close to those people, too.”