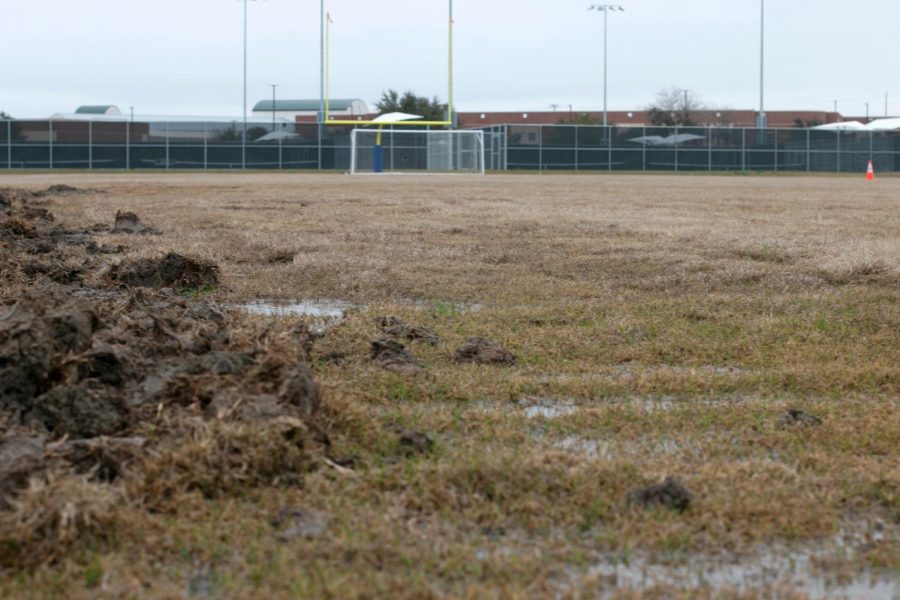 After rain and construction, the old practice fields are in poor condition and remain unused. The main stadium field space has been taken by the varsity soccer teams, forcing the JV1 and JV2 teams to change their practice schedule. “Varsity has got to get their practice and field time in,” Zimmerman said. “So if anything is going to get sacrificed, it’s going to be JV2 and JV1. I think more than anything else, it’s going to hurt them.”

With district soccer underway and baseball, softball and track starting up, the lack of a second practice field has cut the available practice space in half compared to last school year.

Due to a lack of maintenance and poor conditions, the practice fields by the new tennis courts have gone unused this year, leaving the stadium field as the lone practice space. Coaches asked about putting in a turf practice field, but as of now, the plan is to keep the grass.

“Things didn’t work out the way we wanted it to,” varsity boys soccer coach Matthew Zimmerman said. “Obviously, the plan was for us to have fields ready up [by the tennis courts]. There’s always a disappointment factor as far as having things change on you or not getting what you want.”

Many teams share the fields: girls and boys soccer, baseball, softball and track. The lack of space has forced all teams to share one field.

“I think in the end, though, adversity is going to happen in life no matter what, and you can either bemoan it and worry about it a lot, or you can deal with it, adapt and change, and try to fix it as best you can to move forward,” Zimmerman said. “That’s what we are trying to do.”

Zimmerman said the grass field’s poor condition is not just due to the new construction on campus, but has been an issue in previous years.

“The main problem with the fields last year was just the quality of the grass was shot at that point,” Zimmerman said. “There were ants everywhere, players were getting bit up left and right.”

The absence of multiple fields to practice on has led to lost practice time and changing schedules. For example, the JV2 boys soccer team only practices after school on Wednesdays, as opposed to every day in previous years.

“I feel like I have less opportunities to practice with this team,” freshman JV2 player Enrrique Reyes said. “It can sometimes lead to problems when it comes to figuring out how the team wants to grow, because if we don’t have chemistry and we can’t practice with each other, then the rate of our growth as a team and as individual players is really slow, or we just don’t grow at all.”

Assistant principal Glen Croll said the decision to keep the grass is part of a much larger district construction decision, including the building of the new activity center and tennis courts. The process began a few years ago with the district deciding to use Pogue Construction Company, who then formed a plan for construction and presented it to the school board. After the plan was approved, the district proceeded with construction.

“What you’ve got to remember is that this is very complicated,” Croll said. “This is a large district, so the activity center here is not the only project going on within the district. There are several more all over the place, so they have to look at the big picture.”

Although discussion over implementing turf occurred, the district bond budget, which is funding arena construction as well as other improvements around the district, could not compensate for adding turf.

“The biggest factor is budget and also being equitable to the other schools in the district as well,” Croll said. “So we kind of have to follow that as closely as possible.”

Another factor is that turf has to be replaced after a few years while grass requires maintenance and upkeep with mowing, watering and pest control. Croll said the main consideration is cost effectiveness.

“At some point, they may change their mind and say it will be more cost effective to put in turf; when that will happen I don’t know,” Croll said. “It just depends on the money we would have available if there would be some allocated to that. So for right now, it seems like the natural grass was more cost efficient.”