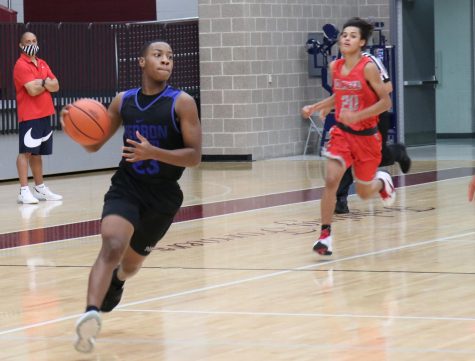 Senior David Deal scans the court looking for the open player. Deal is currently the team's leading scorer on the season.

Boys basketball will play an away game against Marcus High School Friday night at 8 p.m.

“This is a huge game for us,” sophomore Nate Mercer said. “With the loss against Coppell on Tuesday, we definitely need this win.”

Hebron’s current district record is 4-5 putting them in fifth place in district, one spot out of the playoffs. Their overall record is 10-9. The team has had to deal with difficulties, including a shortened preseason and injuries to key players senior Eli Guerrero and junior Noah McKinney.

“Considering everything we have been through, from COVID, to the lack of offseason to playing five sophomores on varsity, I think we have had a really positive year,” head coach Eric Reil said. “I’m super proud of the guys and how they’ve withstood everything we‘ve gone through.”

The team currently ranks second in the DFW area in defense by holding opponents on average to 48.6 points per game. Senior point guard David Deal said he believes defense, specifically stopping the Marauders’ outside shooting, will be key for beating Marcus.

“It’s our defense that keeps us in ball games right now,” Deal said. “Defense is definitely our strong suit; it’s something we pride ourselves on.”

While the defense is a strength, Reil said the offense needs to improve. He said the team plays its best when limiting turnovers and struggles when they fail to keep the ball. The team has had eight different leading scorers this year. Reil said he is not looking for just a single player to step up, but for everyone to play well.

“The most important thing against Marcus will be to limit our turnovers, limit their possessions and execute down the stretch,” Reil said. “We know it’s going to be a grind-out game.”

Reil said a win in this game will put the team in a good spot to make the playoffs. He said he believes the team is good enough to make it and that the rest of their season is in their control. After the game Friday night, the team will have four more district games remaining before playoffs.

“This game, if we win at Marcus, can catapult us to where we want to be, and definitely give us momentum going into the rest of the games,” Reil said.