Stepping up to the stage 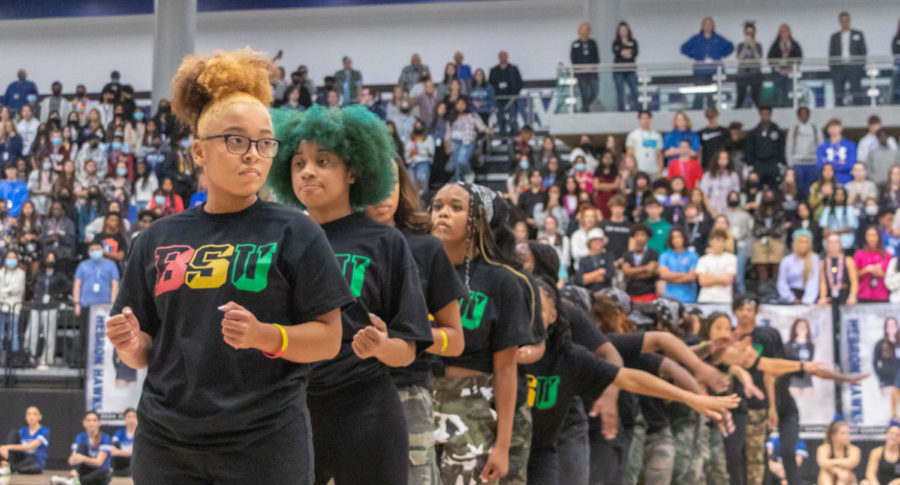 The Black Student Union’s Step Team performs at a pep rally on Oct. 29. “Participating [in step team] has been fun — [it has been] one of the best experiences I’ve had,” junior Tyra Reams said.

The Black Student Union (BSU) recently restarted its step dance team after a two-year hiatus due to COVID-19.

“We had a team a few years ago, but because of COVID-19, students didn’t get a chance to participate in recent years,” step dance leader and BSU sponsor Marcus Osby said. “This year, we had some students who wanted to restart the team and formulate a group for black dance.”

Step dancing is a dance form which originates from black fraternities and sororities. It incorporates traditional African and African-American dance techniques and uses footsteps, claps and spoken words to create a rhythm.

Osby said he decided to help organize the step team due to his involvement in one at a Historically Black Fraternity, and hopes to spread his passion for the dance form to students.

“Step dance started with the ‘Divine Nine,’ which is a group of nine all-black fraternities and sororities,” Osby said. “I remember how it was a big part of black college culture, especially in HBCUs, which is why I wanted to use my experiences to get others involved.”

In order to get started, interested students joined the step team committee and then looked at a variety of resources, such as videos of past performances, for inspiration.

BSU’s step dance team currently has 25 members and practices every day after school. They held their first performance Oct. 29 and are preparing for future school and community performances.

“We hope to perform during step-show competitions, Hawk Fest and hopefully at HBCUs,” Osby said. “We also hope to put on a [bigger] showcase during February for Black History Month.”

Although originally anyone could join, the step dance team plans to hold auditions in the near future for upcoming community events such as HBCU week and Creek Valley’s “Multicultural Fair.”

“All students are welcome to participate in the Step team,” BSU sponsor Alisha Hensley said. “[However,] students who demonstrate knowledge of selected routines and consistently attend practices will be selected to participate in upcoming performances.”

Step dance team member senior Casuy Williams said she has really enjoyed being a member and looks forward to future events and performances.

“Joining the step dance team has allowed me to tap into a new part of me,” Williams said. “I think it’s really nice experiencing something new and doing something I have only seen take place in college.”

Hensley said she is excited about the step team and believes its return ties into the BSU’s increasing initiatives and presence at Hebron. Last year the club had 10 active members and this year they have more than 100.

“[My and other sponsors’] excitement [for the step team] stems from the enthusiasm and pride of every member of the BSU,” Hensley said. “The energy and dedication to represent Black Excellence and school spirit is unsurpassable.”