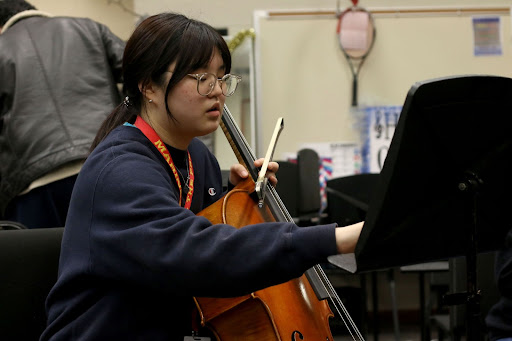 Junior Madeline Chong rehearses for the winter concert during third period on Dec. 9. The concert will begin at 7 p.m. in the auditorium and last around an hour.

Orchestra will hold its annual winter concert Dec. 9 at 7 p.m. in the auditorium.

More than half of the orchestra was virtual last year, and as a result, students could choose whether or not they wanted to participate in the winter concert. This year, the entire orchestra will perform together, and senior Audrey Park said she was glad since it is her last year.

“I was virtual last year, so I didn’t participate in any of the concerts,” Park said. “I’m glad this year we’re able to perform as a full orchestra in-person again.”

Although last year’s concert was limited in capacity, with only two spectators per student allowed due to restrictions, this year, the auditorium is open to everyone.

“The concert was a lot smaller last year,” orchestra director Matthew Cautivar said. “We not only had a smaller performing group, but also a smaller audience. Since some of the district guidelines changed this year, we are allowing and hoping for a larger crowd tonight.”

Orchestra began preparing for the winter concert in October, and it will be the second concert they’ve put on this school year. The concert is free and a variety of holiday classics will be performed.

“We’ll be playing a mix of holiday songs like, ‘Jingle Bell Rock,’ ‘Have Yourself a Merry [Little] Christmas’ and ‘Auld Lang Syne,’” Cautivar said.

Following the concert, the orchestra will host a reception where snacks brought by students are served and a portrait backdrop where families and friends can take pictures together will be available.

“One of my favorite parts is the reception after,” senior Chris Song said. “Students who volunteered will bring food and there will be a big gathering. There wasn’t one last year [due to COVID-19 restrictions], so I’m glad it was brought back this year.”

Cautivar said he is proud of all the work orchestra students have put in and encourages everyone interested to attend.