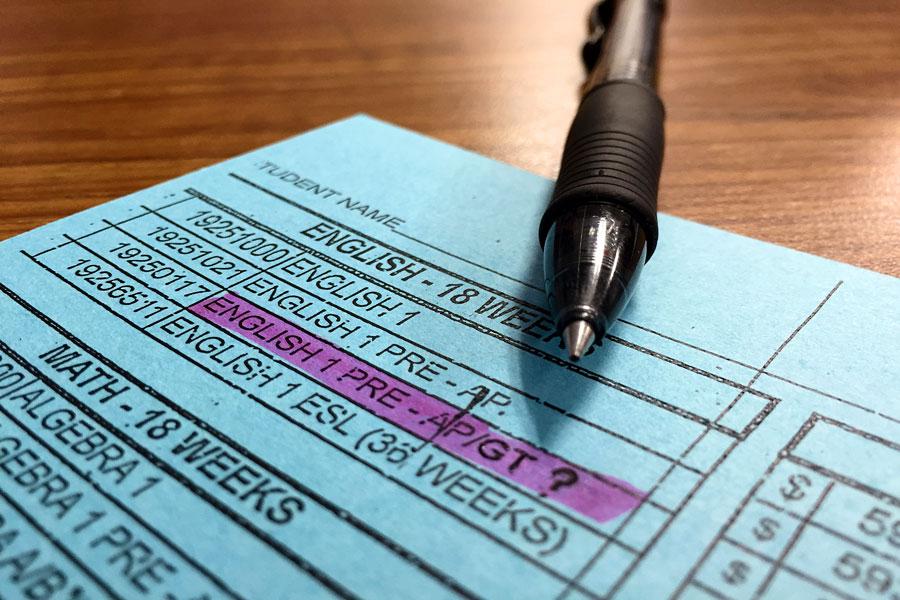 In an attempt to prevent drops in the gifted and talented (GT) enrollment for freshman courses, the GT teachers are creating videos to inform the upcoming classes about the new classes. The goal is to share them on May 18 when GT club sponsor Kathryn Gaughan will make visits to each campus.

“We found that less students are signing up for GT because they think it means more homework,” GT/PAP geometry teacher Bonnie Barger said. “That’s not the case, we want students to be excited by being with classmates that are just as bright as they are.”

“I hope it’s a positive impact and I know it’s hard,” Gaughan said. “You come up from the middle school to the high school and there’s already perceptions of how different teachers are going to be and what you are going to get into when you have a certain teacher. So I think it would be good to have a video for any of the classes so the kids see us before they are in the classroom.”

This school year, when the district brought back GT, students were automatically enrolled in the course and had to request not to take them. Next year, students are given a choice whether they want to take the class or not. With this new method, the campus expects a significant drop in enrollment for the GT class.

“The GT program made me challenge myself to an extent I never thought I had,” Pandey said. “This program has helped me find people who think the same way I do. The intellectual mind set that was in the classroom was amazing because I sat next to people who were driven, motivated, and had the same mindset as me.”

Currently there are 154 freshmen that are labelled GT, and of those students, around 90 of them are taking one or both of the offered GT courses.

“Students aren’t signing up for GT because they think it’s more work and they are very conscious that both classes have the same multiplier,” Barger said. “So they are keeping an eye on their grade point average and their class ranking and if they get the same multiplier they are taking the safe route thinking that they will get just as high of a ranking in a PAP class.”

The inspiration to make the GT videos came from one of the other district campuses that had done the same last year and found it to be effective with higher enrollment in their GT classes.

“They are not just seeing the class as an opportunity to be with like-minded peers and a place to have their needs met,” Gaughan said. “They see it as a place that has more work and I don’t think it’s necessarily true but that is how it’s being perceived and so they don’t want to do the extra work if it’s not going to benefit them in GPA and rank and they think that by taking GT they are going to mess themselves up.”

Barger said she hopes to have 100 percent of students who are identified as GT take the GT classes offered to them for the 2016-2017 school year.

“I think that if you are a GT student, it is definitely to your benefit to be a part of a GT classroom,” Barger said. “It has a bit of a different structure. You’ll be provided with more student choice, you will be able to ask questions and go off of things you are curious about that they don’t have time to cover in another class. I think the student will be able to have more of an enjoyable experience if they are in a GT class.”

The two GT classes available for the upcoming freshmen to take are English 1, taught by Jeffrey Willard and geometry, taught by Barger.

“I know what it feels like to be scared and not know how it’s gonna be,” Pandey said. “I feel a little disappointed because they are not caring about the education, they care about their rank. But all the people in the top 20 came out from Willard and Barger. GT challenges people to think a different way, and not many people are thinking about it like this.”