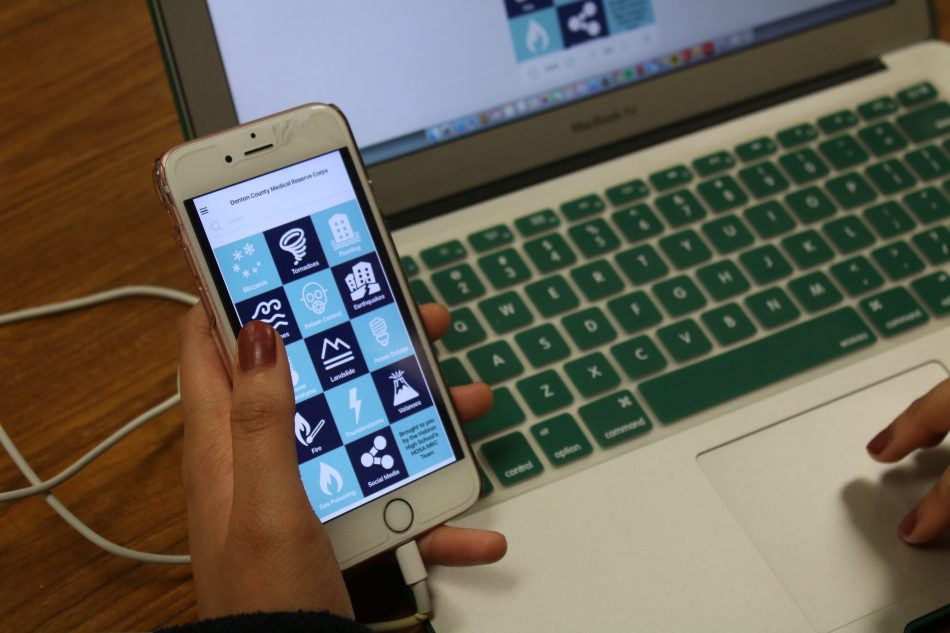 Senior Ankita Padarthy works on the HOSA MRC app. Production on this app began in February.

The HOSA Medical Reserve Corp (MRC) team is in the process of creating an app to aid people in emergency situations; they will present the app at their state competition in Corpus Christi on April 1.

The app will include information on what to do during an emergency, as well as contact information for various emergency services in the area.

“I think [an app] appeals to our generation because we’re very social media and app orientated,” senior Saria Varughese said. “It’s an interactive way to connect with people who probably wouldn’t [have] cared [about emergency preparedness].”

Along with Varughese, HOSA MRC consists of seniors Amina Aslam, Ankita Padarthy, Alyzah Virani and Lydia Mathai. The group works with the Medical Reserve Corp to spread awareness about emergency preparedness through the creation of flyers and brochures, social media, and informational events.

The idea for the app came to Padarthy after the team placed second in their area competition in February.

“I was half asleep on the bus back from area and thinking, ‘okay we’re going to state and this is my senior year; what are some ways to really kick it up a notch?’’ Padarthy said. “I remembered my dad was actually working on an app and I was like, ‘oh that could be a thing I could do.’”

Though similar apps exist already, HOSA MRC’s goal is to create something that is both informational and innovative.

“The difference is that [our app] is going to be specialized to location and it’ll be more updated to the modern world,” Padarthy said. “It’s all about community outreach. We want the community to be able to use this [app] and for it to be user-friendly while also providing useful information.”

The eventual app will become part of a portfolio that the team presents to judges at their competition. The portfolio will include descriptions about the events they host, how they’ve impacted the community, and details about their partnership with MRC.

“Not only do we want to do well at competition, but we want to promote MRC’s goal of promoting emergency preparedness and bringing that to like the high school and elementary level,” Aslam said. “We just want to increase the volunteering spirit throughout the community as well as like teaching common day people about preparedness.”