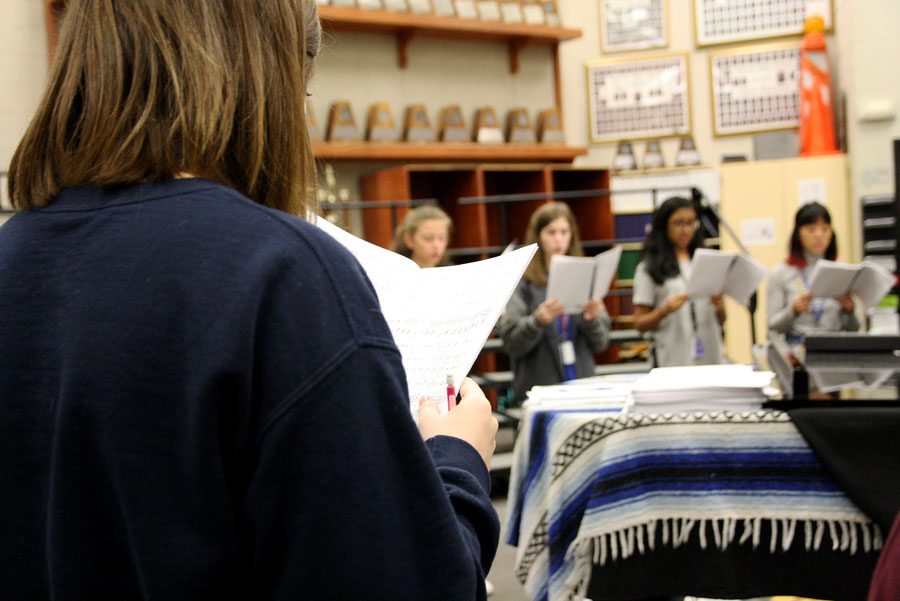 Soprano 1 Caitlin Kresta practices with her sectional during block lunch in the choir room before All State Pre-area.

Twenty choir ensemble groups are performing in a showcase on Feb. 21 in the auditorium at 7 p.m. The showcase is free of charge to attend.

The showcase is for the groups to practice performing music they will be using at the Solo & Ensemble Contest on Feb. 23 at Hebron against other LISD schools.

“[Performing in the showcase] makes them more independent,” choir director Rachel Forester said. “They have to transfer the things they learn in class into their singing without a director.”

In practice, groups work on musicality, tempo, diction and staying together as one voice. After the showcase, the groups will get together in class and improve their songs.

The music groups’ song is chosen from the UIL Prescribed Music List (PML). After checking songs students have done before, the choir directors choose the ensembles. The music ranges from pop music to madrigals and is sung by all the choirs.

“It’s a warm-up to what Saturday brings, so that’s why we call it a showcase and not a concert,” Forester said.