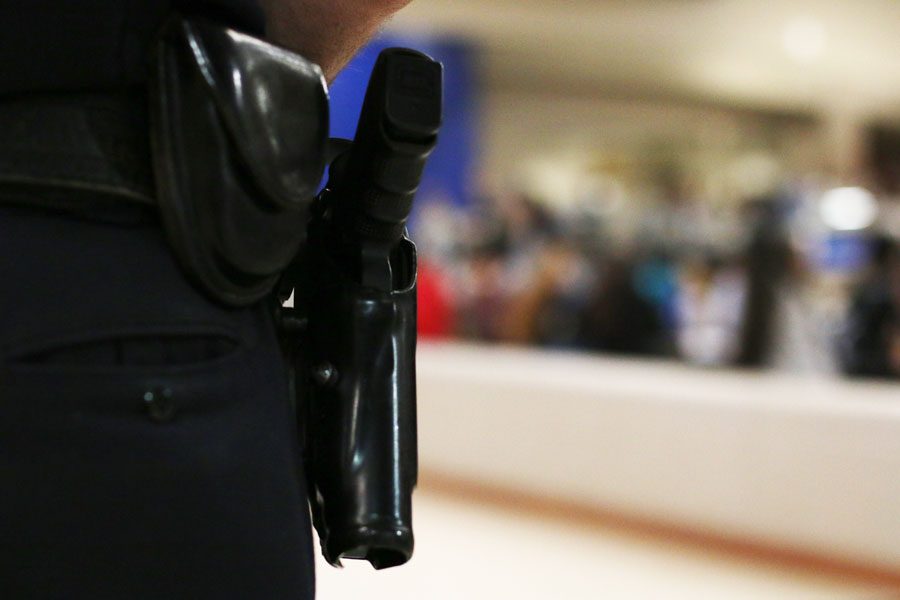 School resource officer Kevin Stiles stores his gun in his duty belt while at the school on Feb. 26.

This year, there have already been several all-too-familiar examples of incidents with guns in schools, the Marjory Stoneman Douglas High School shooting in Parkland, Fl. being the most recent. Since then, families and students have come forward to protest against the rise in gun violence. Students are being directly affected by the gun violence, so their voice should have a louder say in government actions regarding gun control, rather than politicians and lawmakers shutting their voices down.

There have been 25 fatal school shootings since the mass shooting at Columbine, according to  USA Today. The majority of them have been followed by attempts to amend the gun control policies in place, in order to ensure safety. The mass shootings have affected students and families, so their protests to amend a right that is taking away their lives should be taken more into consideration. In the present day situation, students are most impacted by the lack of gun laws to ensure the safety they deserve, especially in schools.

When drastic events, like shootings, occur in society, they are often met with protests or riots. Because of the recent school shootings, some schools have decided to conduct the National School Walkout on March 14 and March for Our Lives on March 24. Such demonstrations haven’t been met with serious acknowledgement, and if they have, there have been repercussions for them. Curtis Rhodes, superintendent of Needville high school, has threatened the students with a 3-day suspension if they participate in the walk-out. Major protests like these are portraying the students’ opinions, and should be met with the proper acknowledgment from the government with active negotiation.

To have any changes on this matter, the government has the ultimate say. Although, it is not rational to lower the voting age for teens to have a say in this matter, adults, especially 18-year-olds, can choose candidates that have better potential gun control policies. For this to happen, adults and the government should take the students’ protests more seriously. The new adults supporting this issue should register for voting soon to have a voice. This would secure  safety by bringing more attention and support to the changing gun control policies.

In order to promote safety in the community, the government should take students’ opinions and protests with the same consideration as they do with legal adults, because it’s the students’ lives at stake.