Opinion: A conversation with actress and activist Jameela Jamil 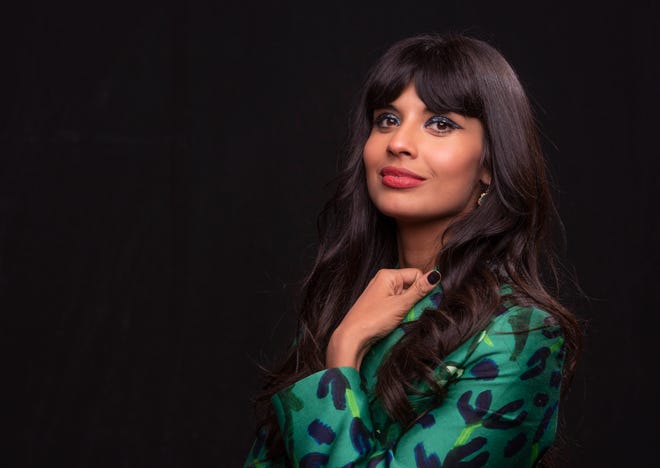 These days, it is too easy to be influenced by media, whether it’s television, social media or the internet. We not only learn and find information from the media, but we find figures who inspire us and our beliefs. So, it’s vital that there are figures who fight against the flow of negativity. Jameela Jamil, activist, writer and actress in NBC’s “The Good Place,” uses her voice to debunk the sheen of perfection that shrouds the lives of celebrities and influencers.

On a whim, I messaged Jameela Jamil on Instagram, a major source of her activism. Daunted by her 2.9 million followers and an additional one million followers on her advocacy account, I didn’t expect her to read my message, much less agree to an interview. As I saw the notification “Jameela Jamil is typing…” a plethora of emotions crossed my mind, and to my surprise she obliged. We discussed her views on body image, mental health and other controversial topics.

While many praise Jamil’s vocality about a variety of topics rarely spoken about in Hollywood, many vilify her progressive views. Being so outspoken about controversial topics could have been detrimental to her career, but she knew she could not sit idly by.

“I always thought it would end my career, but it was just a risk I was willing to take rather than be complicit in the filth of the lies of this business,” Jamil said. “Lies that are not harmless. Our influence trickles into our culture and society. It is unacceptable to harm others in order to protect greedy corporations.”

Her activism launched in popularity when she starred in “The Good Place” alongside Kristen Bell and Ted Danson. The fantasy comedy series is produced by Michael Schur, who also worked on popular shows, “The Office” and “Parks and Recreation”.

“I had no idea what my activism would do,” Jamil said. “I didn’t think. I just did. I just started saying wild things, and doing wild things to bring as much attention as possible to causes I cared about. This was not planned. It’s important to acknowledge that after 14 years of activism, only getting so far, it only became mainstream for me after I had the immense privilege of the platform of ‘The Good Place.’

“I am not unaware that it was easier to be heard after that. It’s pretty frustrating. But please know you don’t need to be famous to do so. If you work in large groups, you can make far more changes as a community.”

As an advocate for body positivity and inclusivity, Jamil is aware of the negativity within the media. She speaks against the influx of harmful weight-loss products that are mainly targeted toward youths. The actress and other body positive influencers successfully campaigned to get rid of ads for cosmetic surgery and unhealthy dieting on minors’ Instagram accounts.

“I get it,” Jamil said. “I love the internet. But it drains me of my happiness sometimes. Neuroscientists design these apps to make us addicted and restless without them. So it’s important to make sure you take plenty of breaks and seek out actual human face-to-face connection.

“But also be careful about who you follow. Toxic information can hurt you without you even realizing it. Unfollow anyone who makes you feel bad about yourself. Only follow people who make you laugh, think and learn.”

Many of Jamil’s views are reciprocated by more youthful audiences, and she hopes youths will continue to advocate for their beliefs.

“I hope by now, young people see their power,” Jamil said. “You are changing the world already. Look at the youth climate activists and March For Our Lives. You have the ability to control the market. It’s a lie that the market controls us.

“Consumerism is just a supply that meets demands. If we demand and petition and get vocal for more diversity of bodies, races, and disability/ability levels in our media, then the big companies will bend. Don’t buy from any company that doesn’t reflect your values. You’re just paying for more of what hurts you. You are in the driving seat more than you know. Get loud.”

Many topics the actress talks about can seem foreign to young people. Students have trouble distinguishing mental disorders, and Jamil wishes the education system would discuss more “truthful” topics, rather than sweeping it under the rug.

“Schools need to do a better job of having truthful and difficult conversations with [students],” Jamil said. “You deserve to be more armed with information than you currently are. These important subjects like mental health, body image, eating disorders, suicide, consent, sex, gender, all need to be discussed. Your parents and schools think they’re protecting you by hiding you from what is out there, but they are actually just leaving you more vulnerable.”

Feminism is often portrayed as bitter. Jamil discredits those stereotypes and describes what feminism is to her and why some wish to tarnish the reputation of feminism.

“Feminism to me is what it always was,” Jamil said. “A fight [for] economic, social and political equality with men. It is bizarre how much we demonize feminism. Men own the publications that smear us as ‘crazy’ or ‘violent’ or ‘manipulators’ or ‘man haters’ or ‘liars.’ Because they aren’t really allowed to kill strong, outspoken women anymore, they discredit us instead. To kill our reputation and make us sound irrational is their tactic to stop women and men from joining our fight.”

Growing up of Indian and Pakistani descent, Jamil felt unrepresented in the media. The British actress wants more representation, not just for people of color, but for other minorities, such as people with disabilities.

“I definitely struggled to feel represented until now,” Jamil said. “And it hurt me as a kid. I thought being thin, blonde, straight and white was the only beauty accepted by this world, and I thought there was something embarrassing about my culture.

“How wrong I was. But how could I know any better without representation. I think we are making some progress, but we need more. And we are still way behind on disability representation. It is mortifying how closed-minded those in power can be. But together, we can make enough noise to change this together.”