Why Rougned Odor’s suspension is a mistake 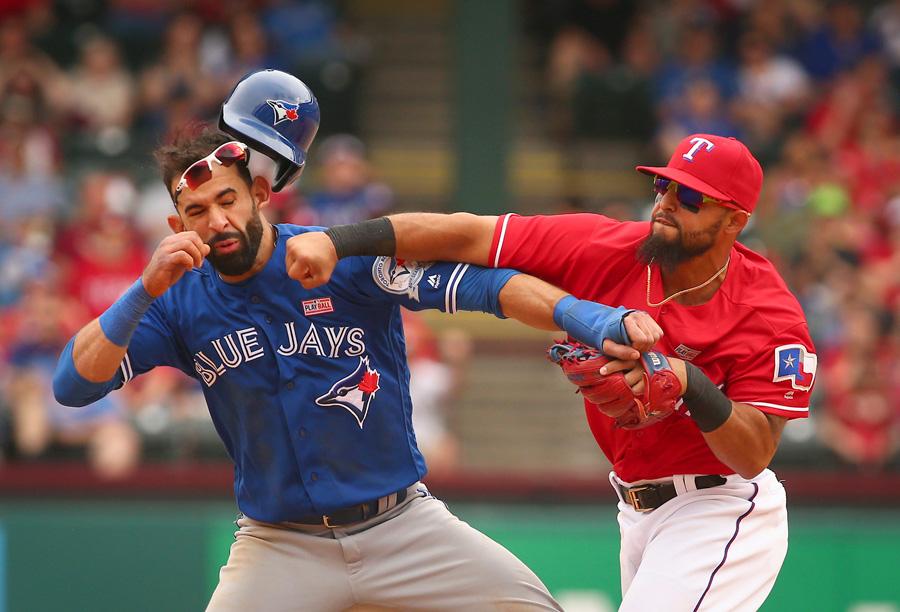 Toronto Blue Jays Jose Bautista (19) gets hit by Texas Rangers second baseman Rougned Odor (12) after Bautista slid into second in the 8th inning at Globe Life Park on May 15, 2016 in Arlington, Texas. The Rangers won 7-6. (Richard W. Rodriguez/Fort Worth Star-Telegram/TNS)

This week, Texas Rangers second baseman Rougned Odor was handed down an eight game suspension for his role in a fight on the 15th during a game between the Rangers and the Toronto Blue Jays. The incident, which involved Odor landing a square punch on the jaw of hated Rangers’ nemesis Jose Bautista, went viral, garnering millions of total views across various internet platforms like MLB.com and YouTube. It also reached Twitter’s United States Trends the same day, sparking numerous memes and even a t-shirt.

The issue here, though, is the length of the suspension. I was watching the game live when Odor took his swing at Bautista, and after my initial excitement at that smarmy jerk getting what he deserved, I began to think rationally about what kind of punishment Odor would receive.

In my admittedly biased estimation, Odor’s infraction should not have garnered more than a three game suspension. My reasoning was that, given the context of the event (Bautista’s bat flip in the ALDS last year, and excessively late slide that Odor barely escaped), his actions could be justified, although not even I, an absolute Rangers homer, think that hauling off and socking him was totally appropriate.

However, tempers flare in baseball, and the two teams have a history. The other reason I didn’t expect a longer suspension was because of the precedent that had been set in 2014 by then-Milwaukee Brewer Carlos Gomez, who earned his three game suspension by swinging at members of the Pittsburgh Pirates with his fists and uniquely, his batting helmet. That particular incident was sparked by Gomez pimping a moderately deep flyout.

I’m incredibly frustrated with what seems like an unfairly harsh punishment when all things are considered. What separates Rougie’s punch from Gomez’s? Nolan Ryan wasn’t even fined for pummeling Robin Ventura in the forehead in 1993. To me, Major League Baseball has made a huge mistake. Not only does the league look overprotective and far from impartial (Bautista, a former home run champion, has been used in several of baseball’s ad campaigns), but they totally whiffed on an opportunity to increase interest in the game. As awful as it may sound, people want to see violence. Exhibit A: the NFL, which has popularized brutality in sports. “The Punch,” as it is informally referred to, drew attention to a sport that badly needs it.

Odor is going to appeal his suspension to try to get it reduced, which means that he’ll still be playing until the final decision is made. Since that game against the Blue Jays, he has gone only two for his last thirteen, and the Rangers have dropped three straight to the lowly Athletics. Maybe this is karma for what happened; maybe the baseball gods are angry. Even if Odor was to be banned from baseball, he will have entered the pantheon of Ranger greats, and the image of him knocking Bautista’s sunglasses off his stupid face is something I will never forget.