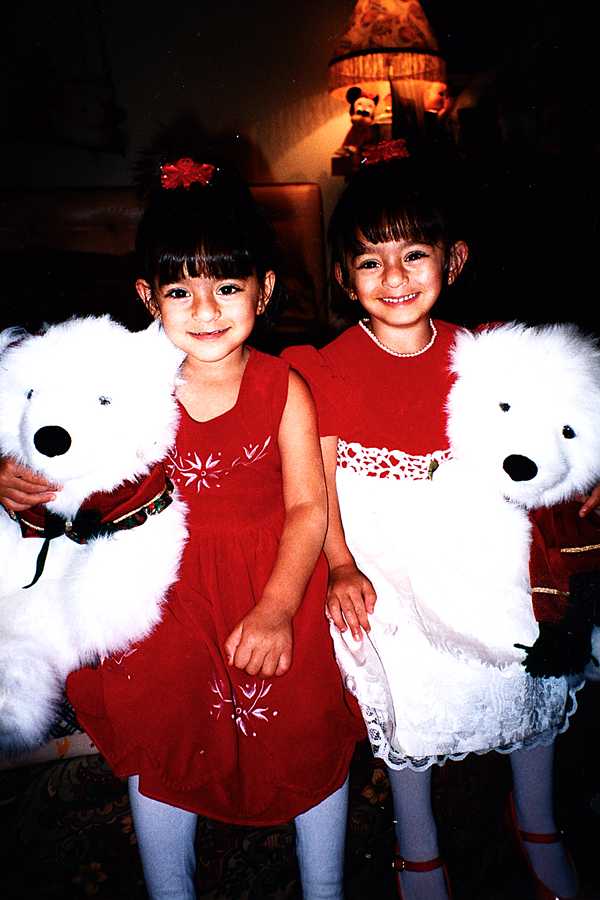 [vc_row][vc_column width=”1/1″][vc_column_text]Days before Christmas break, my sister and I lined up at Brilliance Academy to take a memorable picture.

[/vc_column_text][divider line_type=”Full Width Line” custom_height=”35″][vc_column_text]Quarter pounder and quarter pounder with cheese, that’s what my sister and I were known as when we were born. Weighing less than two pounds each, we were premature identical twins.

Weeks leading up to our births, my mother was put on bed rest and told there was a chance that we wouldn’t survive. After birth, the doctors described other potential risks, such as blindness, heart defects and brain damage.

A few days passed. After close examination, doctors discovered a small hole in the lining of my sister’s stomach.

As my sister was transported to the emergency surgery department at a different hospital, I remained at St. Paul’s hospital, closely eyed by caring nurses and doctors. After recovering, my mother took 30-minute cab rides between the two hospitals every day.[/vc_column_text][/vc_column][/vc_row][vc_row][vc_column width=”1/1″][image_with_animation image_url=”4936″ animation=”Fade In” img_link_target=”_self”][vc_column_text]In the restricted NICU, nurses surrounded me and carefully eyed the monitors that kept me alive.[/vc_column_text][divider line_type=”Full Width Line” custom_height=”20″][vc_column_text]On the day of my sister’s surgery, my mother was bedridden. A small pool of water formed at the base of her eyes causing dark circles. As my parents entered the room, the doctor held a shriveled object, smaller than the size of an adult palm. Tubes poured out of my sister’s body; although the surgery made her smaller, she remained alive and strong.

At the Neonatal Intensive Care Unit (NICU), my mother stared at an unattended child. Worried, she called a nurse and asked for help. When she realized the baby was dead, the nurse explained that the boy’s family was coming to say goodbye. My mother returned to my sister and me and wept, relieved that my sister and I were still alive, but trembling at the thought of the future.

Although there were many risks involved in our birth, we were lucky enough to survive without any complications; doctors viewed us as miracle babies. However, like many mothers, my mom continued to worry and never hesitated to call the doctor.

Over time, my sister and I became “regular” kids. While being so similar, we were sometimes seen as one person, thus loosing uniqueness. Matching dress and shared birthdays only fueled our longing for diversity.[/vc_column_text][/vc_column][/vc_row][vc_row][vc_column width=”1/1″][image_with_animation image_url=”4661″ animation=”Fade In” img_link_target=”_self”][vc_column_text]

[/vc_column_text][divider line_type=”Full Width Line” custom_height=”20″][vc_column_text]When I was in kindergarten, I began to realize that having a twin could be different than having a regular sister. While other siblings were divided into different classes, I always had my sister with me. However, the cost of having a twin remained. At the risk of losing individuality, I forced myself to wear different outfits than my sister and fought for attention from my parents.

“What’s it like being a twin?” people ask me. Ignorant people assume every day that having a twin grants extraordinary powers of telepathy, but it is usually similar to having an older or younger sibling. We fight and argue, but somehow end up supporting each other.

Although my sister and I have similar personalities, we are still different people. In the future I hope to study law while she plans on studying architecture. Her strengths are often my weaknesses, as she strides through science and I suffer. While my sister chose to join Yearbook, I pursued Newspaper to experience a different form of Journalism.

Individualism is hard to achieve as a twin. You are constantly compared by society and many things are automatically assumed for you. I speak for every twin when I state that we are all different, and distinctiveness makes us human.

While my sister and I faced the same adversity through birth, we established a powerful yet separated bond that allowed us to grow into the different people we are today.[/vc_column_text][/vc_column][/vc_row]