Scholarships and Teamwork: They don’t coexist 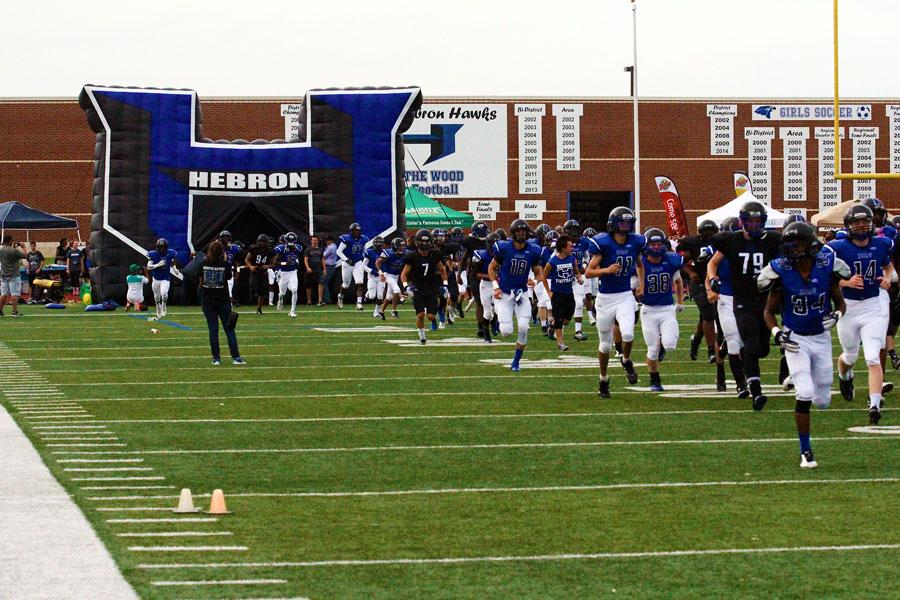 Football players run out of the Super H as the game begins.

Eyes were glued to the television last spring as the annual Under Armour All-American game took place on ESPN. Alumni Jamal Adams played in the game, showing the nation his talent. The climax of the event for Hawk fans was Adams’ commitment to Louisiana State University, getting his 15 minutes of fame as his interview was broadcasted for millions to see.

Adams was one of 12 Hawk football players granted a scholarship last year, an impressive number for the school. Football scholarships are a rarity, but at Hebron they’re becoming a regularity. This trend has changed the view on scholarships throughout the entire nation. Athletes now feel that scholarships are more attainable than they are, creating a sense of individualism instead of togetherness on the field.

During spring practice this year, scouts from a variety of colleges visited. Players buzzed with excitement on the sideline, trying desperately to see if the logo on the scout’s shirt was a significant one. They hoped that the scout might see something in them that was college material. These scouts normally don’t stay for much longer than 30 minutes, putting pressure on the players to perform at a high level. The room for error is minimal.

Coaches repeatedly scold their players for this new attitude. They claim that there are no leaders in this group of millennials, that tearing others down is more practiced than building others up. To an extent, they are right. This generation of athletes is extremely deficient in the trait of teamwork. But they fail to realize the profound influence that pop culture and socioeconomic situations have helped create.

An athletic scholarship is one of the few roads for those with a poor socioeconomic situation to make money at the next level. For some, it is the only option. This is why some athletes feel that scholarships are a right instead of a privilege. There would be no chance of college without that scholarship. Athletes have transformed high school athletics into a tryout for college athletics, and they can’t be blamed for thinking about themselves when a college education is on the line.

The materialistic world has also had a giant impact on the new scholarship world. Most young athletes idolize professional athletes, and hope that they themselves will eventually turn pro. Professional athletes control pop culture, with every new sock, shoe, shirt, etc; becoming the new trend almost overnight. Their massive amounts of wealth are publicized when they sign new contracts, post pictures of their extravagant cars or sport a flashy watch. Young athletes don’t just want to have the same talents as their idols; they want the gargantuan economic and social benefits that come with being a professional athlete.

It is a known fact that our generation lacks the virtue of teamwork that our parents claim is vital. But our generation also faces larger college debt, higher tuition costs and tougher college applications than our parents. Students are quickly discovering that the college process is no guarantee. They are searching for shortcuts and loopholes – any way possible to ensure that they can get the education they want. Athletes’ shortcut is an athletic scholarship, and with the growing social trends and changing culture, they can’t be ridiculed for exploring an option that is selfish by requirement, not by choice.[/vc_column_text][/vc_column][/vc_row][vc_row][vc_column width=”1/1″][/vc_column][/vc_row]