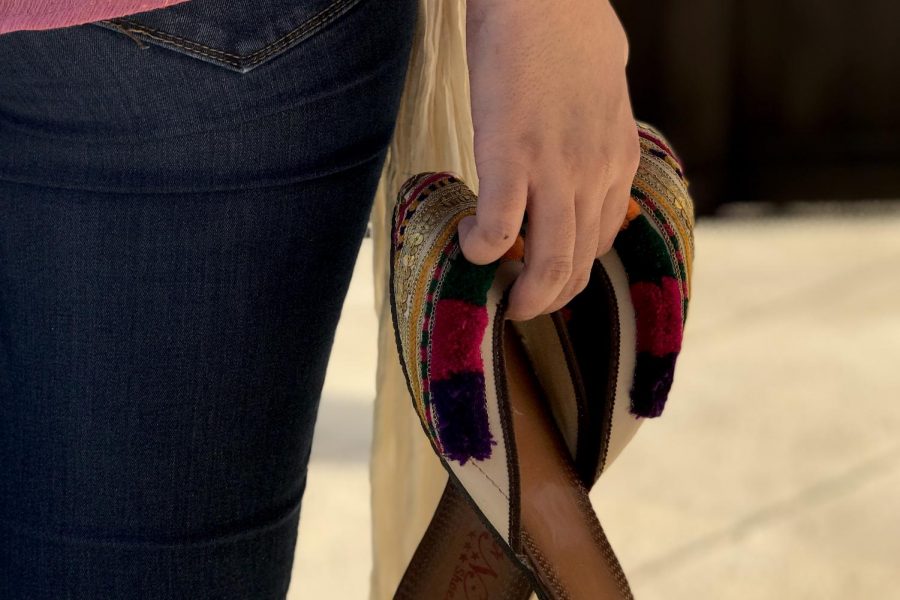 Editor-in-Chief Yusra Waris poses with her khussa (Indian slippers) and her dupatta (scarf) along with her Western clothing.

Although I was born and raised in Texas, I grew up with the ideals my parents brought from their homelands: my dad growing up in Pakistan and my mom in both India and Saudi Arabia. As most immigrants, my parents aimed to preserve the culture they were brought up with. They sought to create a community of like-minded family friends and often took me back to their homelands to be reconnected with family, so I could be more familiar with where my parents came from.

Since I was raised around people like me for a significant portion of my life, I assumed everyone else was like me too: they believed in what I believed in, had a family like mine and understood everything I talked about. Even though I was drastically different from any other student in my class, I thought we were the same. I think my ignorance to this fact allowed me to talk and try to be friends with everyone rather than limit myself to a comfort zone; I didn’t think much about their judgements of me because I bore my Indian/Pakistani culture proudly and didn’t feel the need to change myself.

However, once I started to notice the barriers between my classmates and myself, I began to feel it would be better for me to fit in. One instance that brought me to this conclusion happened during recess, where my friends assigned one day of each week “Girls Day,” where they would all go and play together without me and a couple other girls. I wondered what was different about me that didn’t make me qualified to be a “girl” and hang out with them. Was it my clothes? My hobbies? The only thing that really set us apart was my Asian background. At that moment I realized I didn’t belong, and this difference was the reason why I was excluded from friends I had known for years. After that incident, I watched out for signs that indicated this social barrier; soon enough, everything I initially ignored began to pile up day by day, making the disparity obvious.

Immediately, I was desperate to feel included again and began to reject what made me different in the first place and replace it with what I felt my friends and classmates would approve of. I exchanged my cozy sweaters and T-shirts, some of which my family would gift me with when I would visit them, for the bedazzled, artificial and almost paper thin shirts from Justice, a clothing store that happened to be ‘in’ at the time. I’d listen to less Bollywood songs and more Disney ones. In the years following that incident at recess, I was willing to break with the qualities that made me unique and stand out to blend in with everyone else.

In the end, I achieved nothing. Instead, I lost confidence and a huge part of myself was trying to find a balance between the norms of my homeland and those of America. Since the two cultures differed on multiple matters, I found it frustrating to figure out what ideals I should prioritize over the other, what characteristics I would use to define me. I was choosing between thinking and acting for my self-interests — American individualism — and acting for the interests of everyone — Asian collectivism. I was choosing between voicing my opinions without hesitation and keeping quiet to avoid conflict.

It’s still an ongoing struggle for me: whenever I feel like I have attained an almost perfect balance between my multiple worlds, something will happen and I’ll be sucked back into the cyclone of dismay. However, I have been learning to embrace the diverse aspects of my personality and be more comfortable being different from the people here and back in my homeland. This past year, I finally found a group of friends that understand and appreciate me for what makes me who I am. While I occasionally still find myself astray between the two cultures and while I often have trouble defining who I am, I know  whatever path I choose, it will be solely determined by what I want to do, not what others want to do.