Tennis to play The Colony after defeating Lebanon Trails 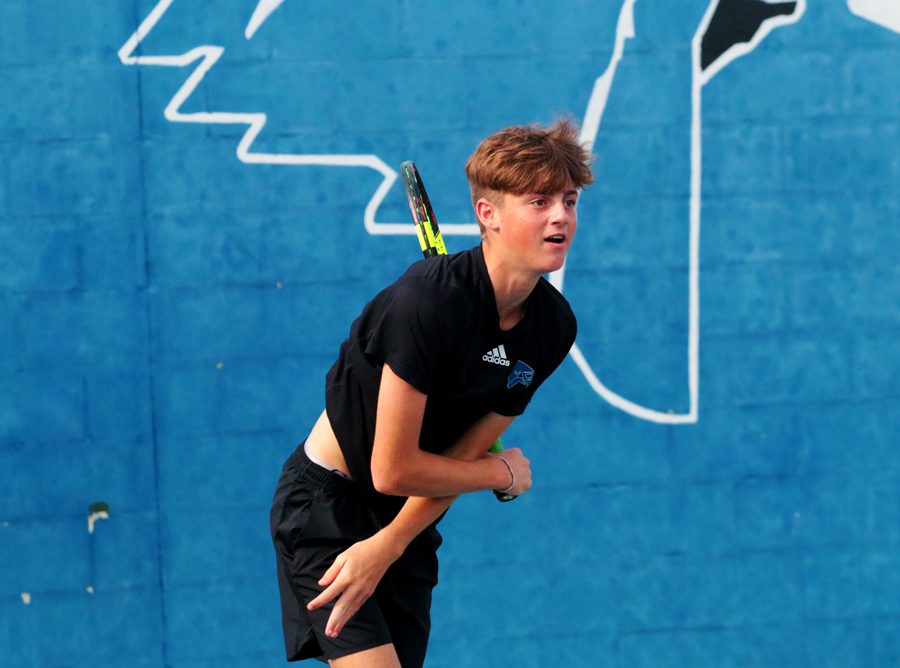 Freshman Dylan Bogan serves during a doubles match. The tennis team will play the Colony August 23.

Tennis will play The Colony Aug. 23. The team currently holds a 4-0 record with wins against Colleyville Heritage, Grapevine, Frisco Liberty and McKinney Boyd.

“We have a group of older kids that are pretty well established when you add the younger guys coming in,” head coach CJ Cowgill said. “We’re really excited about the job they’ll do.”

The tennis team officially began practicing on Aug. 1 and began the season with a 16-3 win against Colleyville Heritage and 19-0 against Grapevine on Aug. 6.

“Even though it’s a very competitive sport, I want to make sure I have fun,” senior Mirabella Herrera said. “I climbed up [the ranking ladder] in the beginning of the year, so it’s nice to finish out well.”

This year, freshmen Lance Luong and Dylan Bogan joined the varsity team. They have contributed to wins in doubles and singles matches for the team’s overall score.

“I like [playing on the team] a lot because you get to know part of your teammates – they all play different,” Bogan said. “It kind of works your game and you’re able to push yourself.”

Despite the addition of freshmen and new players, varsity and JV1 practices continue during  fourth period with drills and mock matches.

“It’s always the same: working hard, having good attitudes, being positive and just trying to get better everyday,” Cowgill said.

Last season, some players placed in district matches, and the team is hopeful more make it to that level this year.

“We are off to a good start,” Cowgill said. “We had a pretty good team last year, so we’re just hoping to build on that, and the experience we gained in the playoffs last year. We hope to do even better this year.”