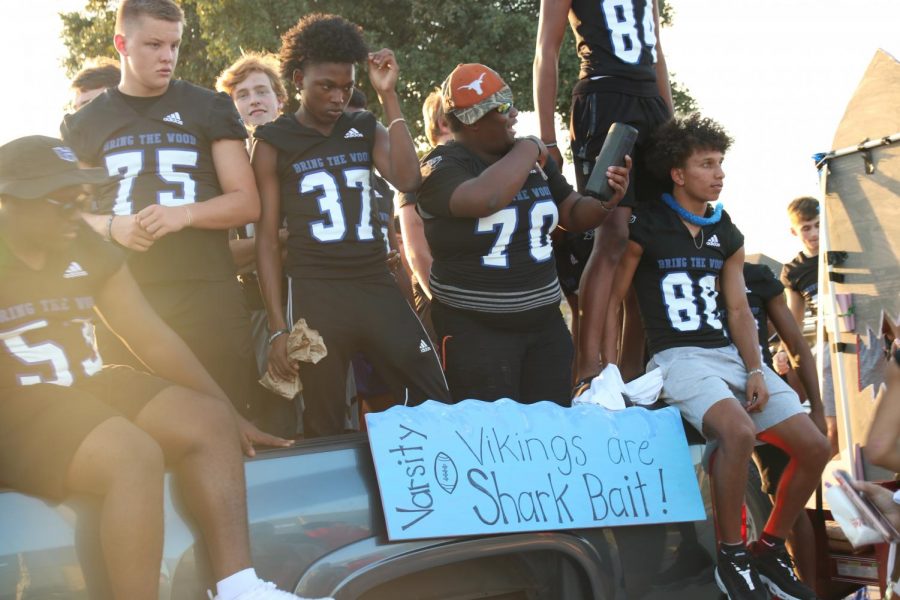 The varsity football team stands on their float during the Homecoming Parade Sept. 25. The team will be going against Irving Nimitz Vikings on Sept. 27 at the homecoming game.

The homecoming game will be held on Sept. 27 at 7 p.m. against Irving Nimitz High School.

“It’s important because we’re starting district, and all the games start counting for playoff seating,” head coach Brian Brazil said. “This upcoming game is important to get off to a good start and have a chance to win the championship.”

The football team won their last game 21-7 against Fossil Ridge High School. The team’s one loss this season was against Martin High School, 14-33, but overall, Brazil said the season is off to a good start.

“We’re feeling a lot of good things,” Brazil said. “Right now, I feel like [the team] is going in the right direction on having a good season.”

Last year the team won against Nimitz 40-21. Both Nimitz and Hebron are coming off a bye week, but Brazil said he is more concerned about how his team plays, rather than how Nimitz’s team plays.

“They, like us, have had two weeks to prepare for this game,” Brazil said. “Like I said, the district game is one of the most important games, and it’s always about our preparation and to be the best we can be.”

Brazil said it is typical for students to play their hardest at the homecoming game, and Brazil is confident this year will be no different.

“With all the distractions of homecoming, we don’t want it to affect our [players],” Brazil said. “But I’d say our players always play well during homecoming and we are really excited for it.”