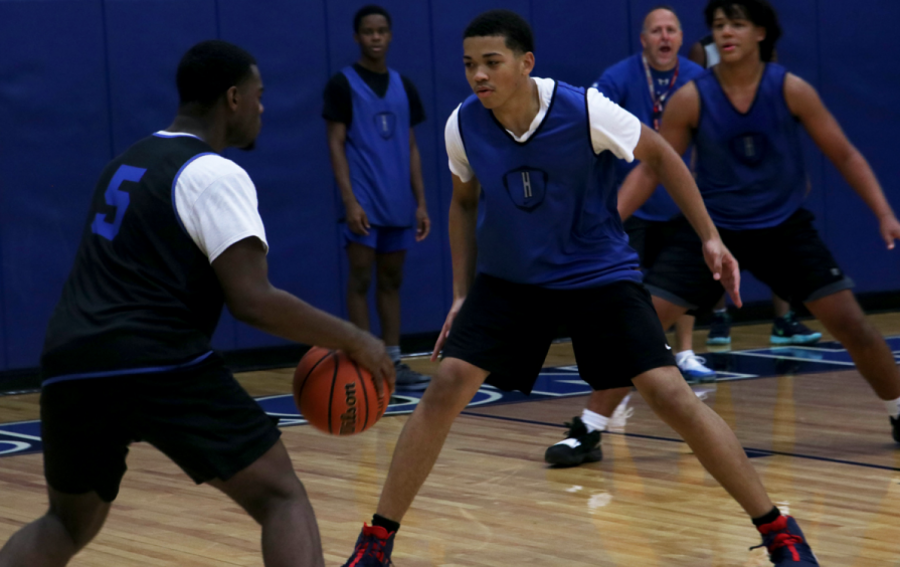 Junior Jalen Lambert plays defence as the varsity team practices for their game on Nov. 19. Basketball will kick off their season against Plano West after losing to Duncanville last Feb. in round two of the playoffs.

Basketball will have its first game against Plano West on Nov. 19 at 7:30 p.m.

After winning a scrimmage against Richardson 41-36, head coach Eric Reil said he is looking forward to seeing his team progress offensively after observing their performance in the scrimmage.

“The biggest thing about scrimmages is we like to see how kids handle certain situations, and also go back and watch films,” Reil said. “Sometimes you think you’re doing the right thing, but film doesn’t lie. So, we can show kids what they’re doing wrong and it’s a good way to prepare them for the real games that are coming up.”

Three new players have moved up to varsity this year including senior Reese Smith who was unable to play in previous seasons due to a concussion. To get them acclimated and set them up for success, Reil said the team has implemented a new offensive scheme and a rigorous practice routine.

“We always say that we want our practices to be harder than any game that we have to play in, so practice schedules are pretty tough and demanding of the kids,” Reil said. “We put our kids in frustrating situations so when it comes to game time, there is nothing that they haven’t seen or gone through. Hopefully, if we can deal with those situations in practice, when it comes to the game they know how to handle themselves in those scenarios.”

Basketball season will last about 24 games for the men’s team, depending on if they advance in tournaments taking place in February. Reil said while they are unable to identify their weaknesses this early in the season, their strengths lie in agility.