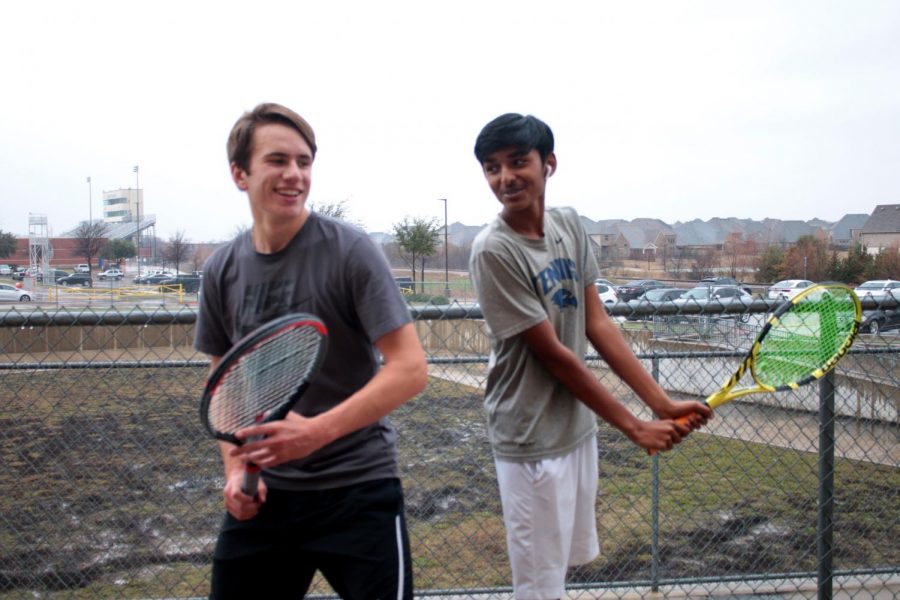 Juniors Rohan Agarwal and Robert Herrera pose for a photo.

The spring tennis season started Jan. 31 with competing schools all over the metroplex. During the fall season, tennis competes as a team; in the spring, athletes compete individually in singles and doubles matches.

Juniors Rohan Agarwal and Robert Herrera have been playing as a doubles team since eighth grade. Since then, they have become one of the team’s most successful pairings. They will play together at the Grapevine invitational Feb. 14.

“The partnership between Robert and I works well because our styles of play complement each other well,” Agarwal said. “Additionally, we get along great as friends, and we are always able to communicate well.”

In the recent tournament against multiple schools in the metroplex, Agarwal and Herrera won first place in the consultation draw. They lost to Jesuit in the first round, but beat doubles teams from Frisco Centennial, Liberty and Allen.

“I was happy with our result because although we didn’t place in the main draw, we were able to get a good warm up and start for the rest of the season by winning a few matches,” Herrera said.

Traditionally in doubles, one person plays at the net while their partner plays on the baseline. Even though both are capable players, Herrera prefers to volley at the net, while Agarwal is more comfortable with hitting ground strokes at the baseline.

“My playing style compared to Robert’s is like fire against water,” Agarwal said. “He is a great player at the net, while I do well at the baseline. Meanwhile, I struggle more at the net while he struggles from the baseline.”

Even though they have been partners since eighth grade, Agarwal and Herrera have been friends since elementary school.

“Rohan and I have a great connection because we have been friends since early elementary and have always been close friends that can make each other laugh whenever we feel down during a match,” Herrera said. “I look forward to playing against some really good teams, building up experience with Rohan and constantly improving our doubles game.”