Baseball to play in Lewisville tournament from Thursday to Saturday 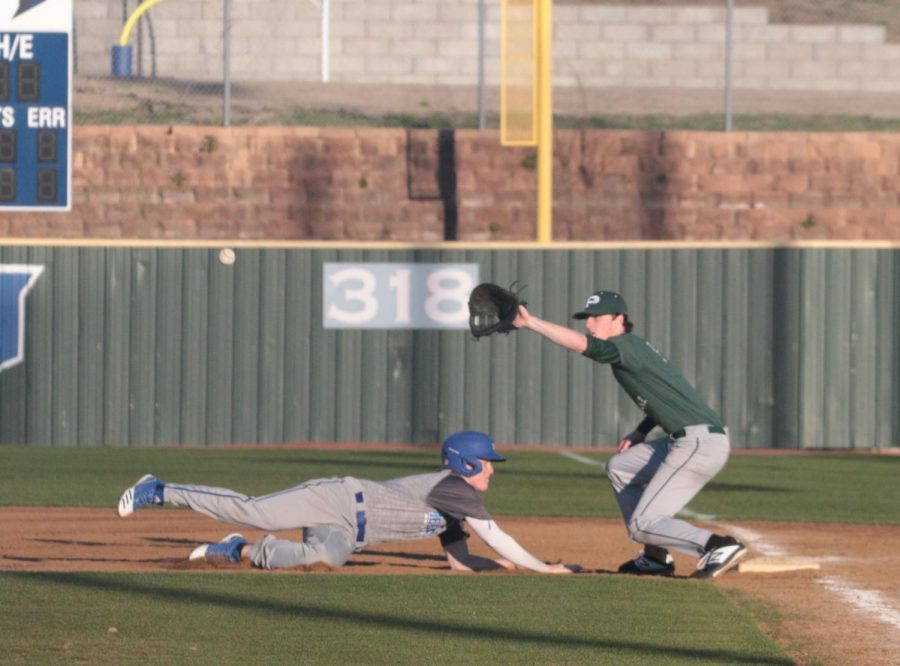 Junior Trent McCown dives back into first after the pitcher tries to pick him off at the Hebron vs. Prosper scrimmage on February 24. Varsity practices during fourth period.

The baseball team will play six games in the Lewisville tournament this Thursday through Saturday at Hebron.

“The tournaments help us get prepared for district,” coach Steve Stone said. “The whole purpose of the tournaments is to play a whole bunch of games with a bunch of different guys so we can figure out the pieces to the puzzle as far as what makes our team work.”

This is the last of three tournaments this season. After finishing this tournament, the baseball team will have played 18 games over the course of three weeks.

“Team speed would be our biggest weakness right now,” Stone said. “We have three or four guys who can run, but overall our team speed is not where I want it to be.”

The team will play against Lake Dallas and Denton Ryan on Thursday, The Colony and Cedar Hill on Friday and Bryon Nelson on Saturday.

“Our pitching has been pretty solid,” Stone said. “We’ve had some power hitting and we’ve had six or seven home runs, so that has been a good sign.”

The players have prepared for the tournaments by playing four scrimmages so far against Frisco Liberty, Keller, Plano East and Prosper along with starting workouts.

“The scrimmages give opportunities to my players to get a chance to play more than they would in the normal games so they can really show me what they can do,” Stone said.

The team will start district play on March 18 against Irving Nimitz.

“The kids have been working hard,” Stone said. “We are not prepared for district yet, but that’s what these tournaments are for. We’re trying to get prepared for the district, but the ultimate goal is to make a deep run in the playoffs.”