Football to play against Marcus in homecoming game 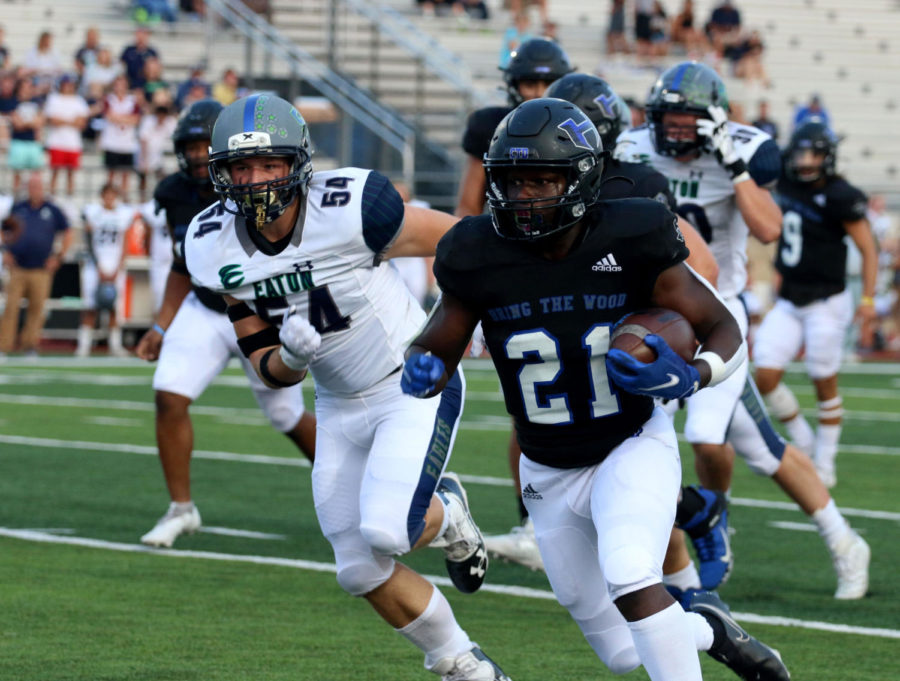 Running back Fred Ware runs the ball against Eaton at the Sept. 10 home game.

The football team will play its homecoming game on Oct. 22 at 7 p.m. at Hawk Stadium. Hebron will go up against Marcus coming off a four-game win streak in district.

Offensive coordinator Jeff Hill said the team has been focusing on finding their identity both defensively and offensively.

“[Early on], we were finding out who we are as a team and going against really good football teams, [such as Guyer and Martin,] where we had our players playing offense and defense,” Hill said. “[Finding our identity] really allowed us to get our kids in shape and find out what we can do. We feel really good about this half of the season going forward because we answered a lot of questions about who we are as a team.”

Hebron hasn’t competed against Marcus since 2019. Due to a high number of positive COVID cases on the team at the time, the Hawks were unable to play Marcus during the 2020 season.

“This year, we’re prepared to run our offense, execute our defense and stay together as a team,” running back Fred Ware said. “Mistakes are going to happen, and we need to know how to overcome them.”

During the beginning of the season, the football team was struggling with not only tough opponents, but also their strategies. After the Hawks lost against Guyer, 46-17, and Martin, 59-15, the team started to come back. The season began looking up when losing to Eaton by only one point, and they have been on a win streak since.

“The big hump was us trying to find our identity as a team, and [team identity] changes from year-to-year,” Hill said. “Leaders can lead from anywhere and titles don’t matter. It really matters who’s got the right voice at that time. Our kids have done well adjusting and playing the way they know how to play.”

“The wins have put confidence in each player on our team,” quarterback Jacob Buniff said. “[The wins] let us know that we have the ability to win games and motivate us to keep winning games and to improve each week. The confidence has helped by allowing us to know that even if it’s a good team, we will go in thinking we can win.

Hill said that as the season goes on, things get monotonous for the players. To lessen the repetitiveness, the coaches are trying to keep a balance between mental and physical reps.

“Later on in the season the body will take a physical toll, but the mind needs to stay sharp,” Hill said. “We’re trying to prevent our kids from getting worn out and letting that mental and physical fatigue set in. Some years, you can power on through, while other years you might have to back off.”

The football team has been starting practice around 6:30 a.m. on most weekdays. Practice is around two hours to ensure the team is prepared for upcoming games.

“I’m looking forward to seeing a lot of people in the stands,” Ware said. “I think a lot of people will show up since it’s homecoming. It’s going to be a great crowd atmosphere that will pump us up for the game, and we’re going to put on a show.”

With the football team on a winning streak, Ware and Buniff said they feel this will be another win in district.