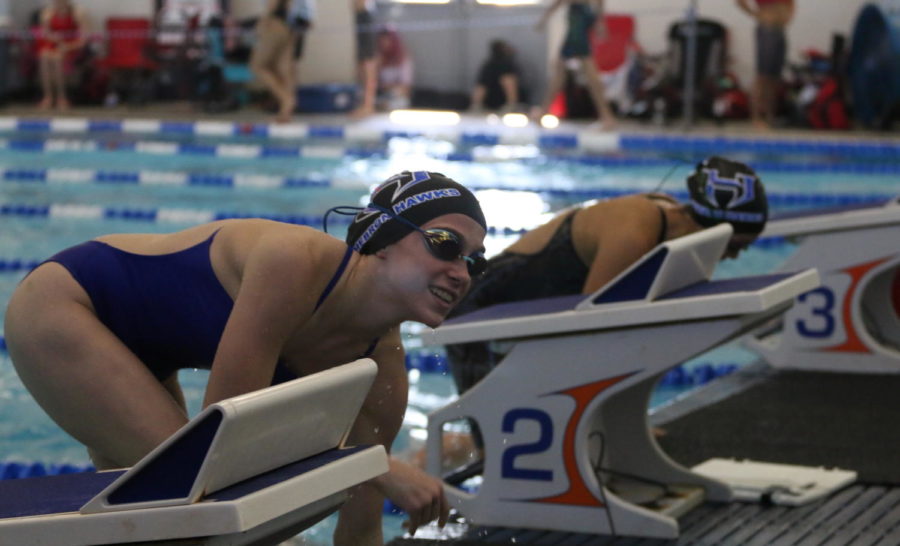 Swim begins to get ready to compete in their events during TISCA finals.

Dive competed in the Texas Interscholastic Swim Coaches Association (TISCA) invitational at the LISD Aquatic Center West on Nov. 18 and swim competed in TISCA preliminaries on Nov. 19, where coaches made time cuts to determine which swimmers would be best in specific events and who qualified for TISCA finals the following day. Hebron was represented by 15 swimmers out of 600 participants on Nov. 20 at the finals.

After TISCA, coach Donzie Lilly said the team is aiming for district and has two months to prepare before beginning postseason swimming competition.

“The swimmers have been working hard in preparation for this [TISCA] meet,” Lilly said. “I give the swimmers a little more rest compared to other [swim] meets to check and see how they are progressing with the training. [TISCA] is a good opportunity to get some in-season best times and to get the feel of a big [swim] meet atmosphere.”

Although Lilly said preliminaries were difficult for swimmers due to nerves and the fact that they had not been able to swim at a meet as large as TISCA last year because of COVID-19, he said that they were able to bounce back during TISCA finals.

“Preliminaries were rough, but finals were a whole different story,” Lilly said. “The [swimmers] came ready to race, and it showed. There were huge time drops across the board from preliminaries, and [senior] Tyler Davis had a standout performance breaking the 100 breaststroke record.”

Senior Amber Du competed in the preliminaries, and she was one of the 15 swimmers who qualified for finals. She swam four events in the TISCA finals: 200 Medley Relay, 50 Freestyle, 100 Butterfly and 200 Freestyle Relay. Du said she believes she performed well in the TISCA finals and that she improved from the TISCA preliminary rounds.

“For preliminaires, I felt like absolute crap going into it because I wasn’t feeling the best, but I did better  [during finals],” Du said. “Our team environment was positive and we were trying to push each other, and I thought it was fun just being able to push your teammates on.”