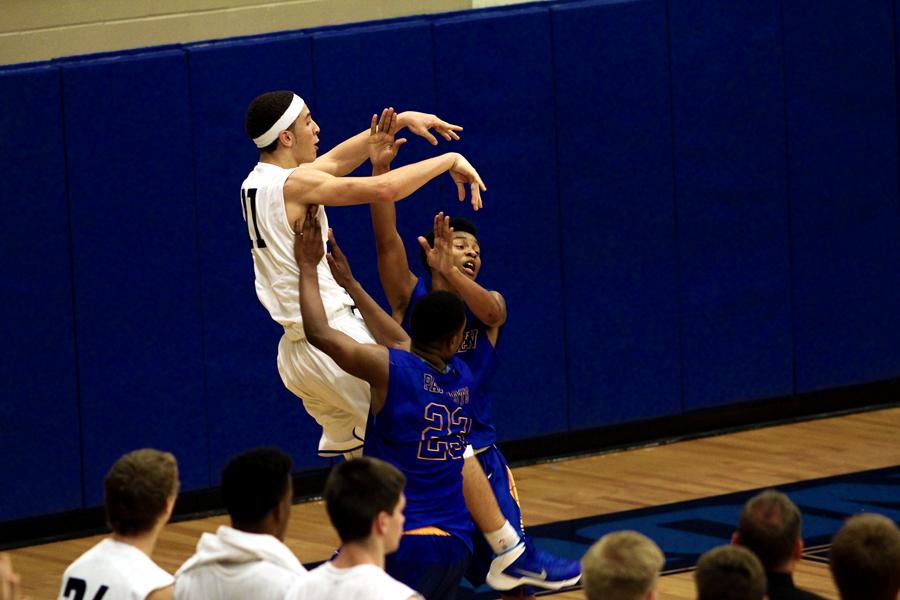 Juinor power forward Tyler Williams steals a pass with 20 seconds left in the game and passes to a teammate to escape the double-team pressure.

The atmoshpere was electric at Hebron on Tuesday as the Hawks took on a Lakeview Centennial team that featured 7’0″ center Elbert Robinson.

The Hawks started off the game strong by creating many fast break oppurtunites that led to an easy two points on the other end. Senior center Connor McClenaghan’s defense on Robinson forced Centennial to pass the ball outside of the paint, which allowed the Hawks’ to get many steals in the first quarter. Keeping the 7-footer boxed out didn’t give Centennial any second-chance oppurtunities and forced the Patriots to constantly shoot 3-pointers, which was not their forte. The second quarter didn’t go as smoothly for the Hawks, however. When McClenaghan went to the bench for a quick breather midway through the quarter, it forced senior center and power forward LaRandall Scroggins to contain the 300-pound Robinson. This was an unfair matchup from the beginning since Robinison easily outweighed Scroggins by at least 100 pounds. Even though Scroggins played well in an awkward role for his size, Robinson had his way in the paint and scored with much more frequency than he did in the first quarter. A monster put-back dunk by Robinson before the half ended put the visitors’ side in a frenzy and even got some respect from the home side crowd. Nonetheless, the Hawks led 37-28 at halftime thanks in large part to their offensive explosion in the first quarter.

The second half was a mirror image of what happened in the second quarter. Centennial continually fed the ball to Robinson in the paint and he either scored or got fouled in the process. Robinson was a surprisingly good free throw shooter, which added even more insult to injury as the Hawks racked up fouls and Robinson punished them with points. The fouls racked up so quickly that McClenaghan fouled out in the third quarter, putting even more pressure on the Hawks’ backup big men to somehow stop Robinson. Even though Lakeview was starting to score points in more quantity, the inability to score points in the second half was what doomed Hebron in the end. The Hawks only scored fifteen points in the second half, with a dismal 5 points in the third quarter. Centennial quickly found out that junior power forward Tyler Williams was the threat when it came to scoring. The Patriots double-teamed Williams for most of the second half and forced him to either put up tough shots or pass the ball. The lack of offensive production was imminent late in the game, as the Hawks had several oppurtunities to take the lead but couldn’t execute their plays. The key play of the game came with 20 seconds left as Lakeview was inbounding the ball with a one point lead. Williams stole the pass in the corner and quickly passed it to one of his teammates. The ensuing jump shot missed, along with several tip-in attempts, and the Hawks blew their chance to beat a highly-ranked team. Williams finished the game with 20 points, with Scroggins being the next highest scorer with 8 points.

The Hawks will have to improve on the offensive side of the ball if they want to have the same kind of season that they did last year. The losses of Ridge Shipley, Jeff Hicks, and Chase Mortensen to graduation has left the team full of many unproven players that haven’t had experience at the varsity level before. As the season goes on, these players will have to improve and help Williams and Scroggins on the offensive side of the ball, which will make the team much better than it is right now. Another key note is that without McClenaghan, the Hawks are undersized in the paint. It is important that McClenaghan stay in the game as long as he can or teams will certainly take advantage of the Hawks’ lack of size.

Final Score: Lakeview Centennial 53 Hebron 52. The Hawks are now 1-1 on the season as they head to Houston this weekend for the McDonald’s Texas Invitational Tournament.