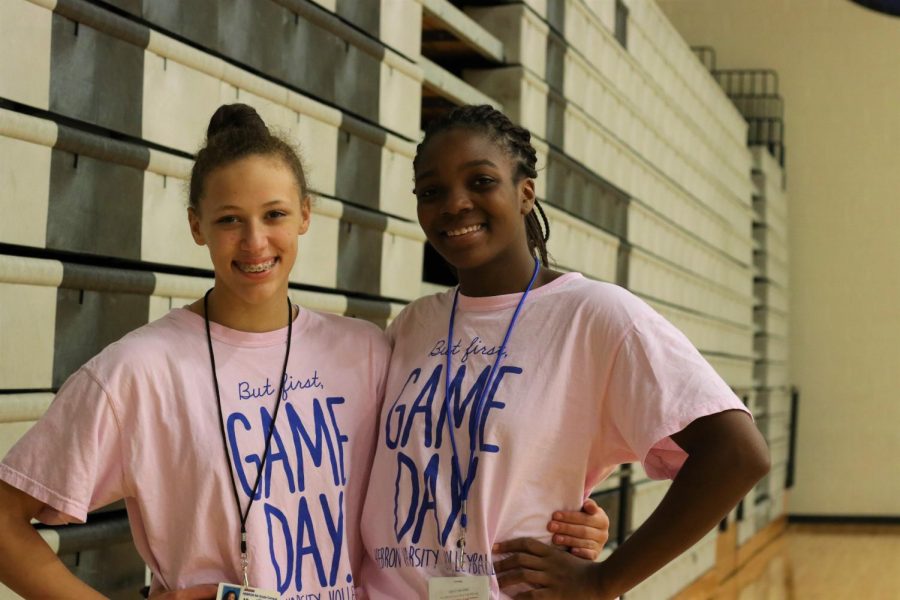 Freshmen Harmony Sample and Lia Okammor pose in the gym. As members of the varsity volleyball team, they’ve been working hard since summer and are now preparing for playoffs. “Practice is going easier, and it’s getting more fun too- we’ve been doing a lot more competitive drills.” Sample said.

The varsity volleyball team is renowned for being a successful program, having won three state titles in the last three years and going for a fourth. This year, the team has seen something unusual for such a highly regarded program: two freshmen on the varsity team.

Freshmen Harmony Sample and Lia Okammor have been honing their volleyball skills for a long time and this year were given the opportunity to shine on a strong high school team. With the team now preparing to enter playoffs, they are working hard to keep up the pace.

“Sometimes in games, I feel like I make a lot of errors and I’m not helping, so I start to lose confidence,” Sample said. “In practice, everyone is really encouraging, but if I mess up in games, [my teammates] get mad that we’re losing points.”

Sample and Okammor play together at Texas Advantage Volleyball and have been on the same team for almost two years. They said playing on a high school team is a big change from what they are used to.

“I’m not as tall or as aggressive as some people, and it gets discouraging sometimes,” Okammor said. “Since I was playing with people my age last year, it was easier. [Now,] it’s hard because [I went] from being the best to being less than what the team is.”

Sample began playing volleyball at 11 with her mother as her coach, and Okammor also took up the sport due to family influence. Her older sister is Nnedi Okammor, a junior who is also on the varsity team.

“My sister actually used to play basketball,” Okammor said. “And one of her teammates recommended that we go to this place to get a volleyball private lesson. The teacher told us that we should join the club, so we did and we got better at the club through the years, and that’s how I got into [volleyball].”

Though starting off their freshman year was challenging because of balancing school and the intense volleyball season, Sample and Okammor said they do not feel much pressure anymore.

“This year [the seniors] are nicer and are understanding of what it’s like to be a little freshman on [a varsity] team,” Okammor said. “It’s a really good year to be a freshman on varsity.”

Head volleyball coach Karin Keeney agrees that the timing has worked out well for Okammor and Sample.

“The older kids have just pulled them in and it’s been awesome,” Keeney said. “It really makes a coach proud when your older kids love on the younger ones and help them learn.

Sample and Okammor are hopeful and they do not feel the pressure on the team to win another state title.

“We’re kind of the underdogs this season, but we’ve been getting better, and there’s no pressure on us to win again,” Sample said. “We’ll for sure make playoffs, but who we play depends on if we go in as second or third.”

Sample and Okammor said if the team keeps improving like it has the past few weeks, they could end the season successfully.

“[In] the last couple games, we’ve gotten so much better, so if we keep going like that I think we have a good chance at getting further in playoffs,” Okammor said.