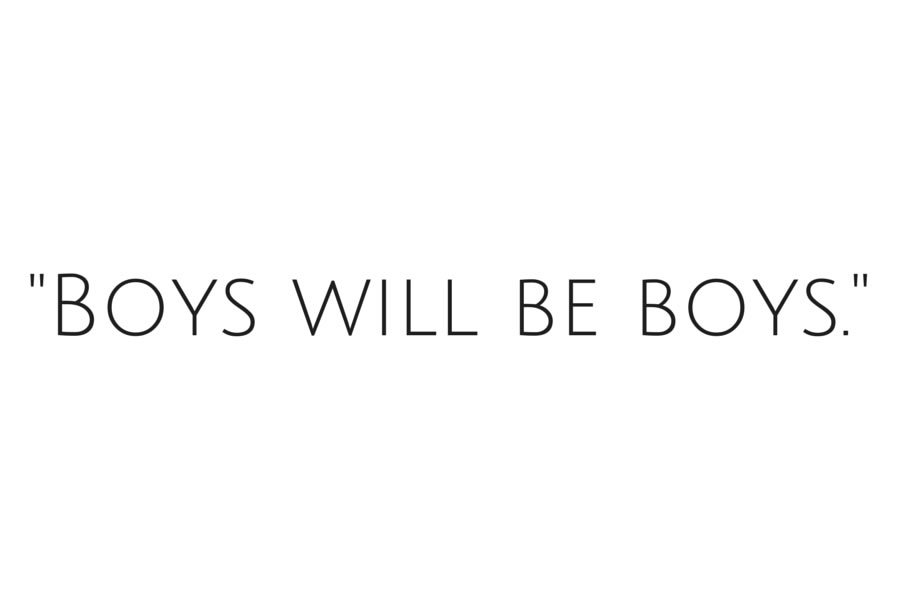 I have been fed this response on multiple occasions throughout my life. It has been a consistent response to boys’ antics, both little and big, for as long as I can remember.

What I find thought-provoking, though, is that it’s not girls and women who continue to tell me this; it’s boys, and I would like to open a discussion as to why this is being said.

After a lifetime of observation, the “boys are stupid” and “boys do stupid stuff” argument isn’t going to cut it anymore.

Those comments are an uncredited and widely accepted excuse for boys and men to get away with behavior ranging from impolite to lethal, purely because they have always gotten away with it in the past. It’s a pass to act inappropriately and without consequence, packaged and sold as a self-inflicted insult. A quick jab at themselves that I can only assume was in attempt to make me feel better.

It’s not happening on purpose. A person will raise or lower themselves to the standard that the people and world around them have given. If everyone tells you that you are bad at math and will never get it, you might start to believe it. It would be that much easier to give up the first time it gets hard.

When people give me the “boys are idiots” excuse I can’t help but contemplate a few things.

If you are honestly trying to tell me that women are more capable of cognitive reasoning and intellectual conceptualizing, which I don’t think you are, then that would pertain to another conversation where we could take a look at the vast majority of people who are leaders in this world. But again, I don’t think that’s what you’re saying.

I don’t think that girls are inherently more intelligent or sensible than boys. I’m not saying we are completely and entirely the same, but I’m not completely and entirely the same as every other girl on this planet either. There’s a lot of evidence that suggests that, as humans, we are pretty much playing on the same field.The problem is not that boys are “stupid” and do “stupid things” or that they are incapable of comprehending the gross inappropriateness of their actions. The problem is that as a society we have taught them from since they were babies that “boys will be boys.”

If someone gives you the room to be a certain way, you are going to act that way. You will think it’s part of who you are, and until someone shuts it down, you will continue to believe it.

Of course I’m not a boy, so what do I know? Different kinds of people have cultural idiosyncrasies that I am not well versed in.

But I know what I’ve been taught.

“Boys are mean to each other.”

I’m not going to hold boys, a demographic of people I spend 50 percent of my time with, to a lower standard. It’s not acceptable. Not for the boys who fall victim to each other’s abuse, and not for anyone else who lives in fear of what “boys do”.

We’ve enhanced the idea that boys and girls are so different to such a disturbing degree. The binary that we have subjected ourselves to both forces us into and away from ways to live our lives that could make a significant difference to our overall well-being and self-actualization.

I think it’s important for all boys who are reading this to know that I truly, honestly and genuinely do not think that you are stupid. I don’t.
But it seems like you do.[/vc_column_text][/vc_column][/vc_row]