What a voice can do 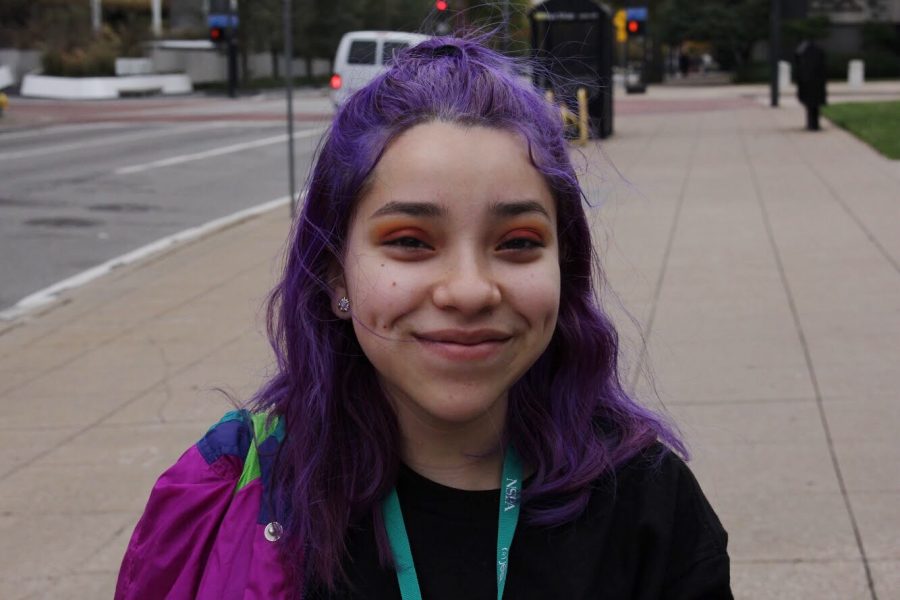 Senior Yvette Lopez from Omaha Central High School in Nebraska believes it is important to have a voice because she believes everyone should state their opinion.

The power of a voice can go a long way. Students from across the nation are speaking out as a part of their journalism programs to report the truth, and “New Voice” is helping those students accomplish their goals. The nonprofit is working to help students share unbiased news with a purpose to help impact their schools and their communities. Students at the JEA NSPA convention are an example of the nonprofit’s hard work in motion.

“The faces of journalism”

An Issue worth fighting for

When the Plainsfield High School newspaper staff decided to publish their first magazine issue, they had no idea how big of an issue it would become.

The publications staff published their first issue of the magazine in Aug. of 2017. The issue covered was about relationships and dating. Junior editor Kayla Mays took on the project and said she decided to include all kinds of dating relationships and connections, including LGBT and polyamorous relationships.

After the publication was released, the staff received pushback from faculty members, including the principal of the school and the president of the school board, as well as a select group of students. They said they felt that the publication was not appropriate for a high-school-aged audience. The staff was then interviewed by the principal, as well as multiple news sources, when the issue was under questioning.

“The definitions were completely unbiased,” Mays said. “A lot of people felt they shouldn’t be featured [in the publication]. There were a couple of topics such as polyamory and LGBT dating that people didn’t like because their views don’t support those topics. The president of the school board has Christian based views, so he didn’t think it should be allowed to be published in the school.”

Following the disapproval of the president of the school board, Mike Allen, was the backlash brought by his daughter, Brett Allen. Senior at Plainsfield, Jack Estes, said that Brett was unfair in her argument saying the issue was inappropriate because it did not have a Christian background. Because Plainsfield High School is a public school, a Christian bias is not a requirement.

“After the fact, our principal was okay with it, but the president of the school board was not at all on board with it,” Estes said. “His daughter was actually the most mad; she called us out on Facebook because she didn’t see Christian values in the publication. I think what she failed to realize was that this is a public school and it’s a separation of church and school.”

“We knew we did good work, even though some people didn’t support it,” Mays said. “I think it’s important that people know these topics and know what’s going on around them. I know a lot of people didn’t know what half of the issues in this publication were until after it had been published. People came up to me to thank me for informing them about the topics and said they weren’t afraid to talk about it anymore with their friends or parents. It’s definitely opened pathways for people to talk about [relationships] with others around the school.”

While the issue put pressure on the publications staff at Plainsfield, junior Ava Worthington said that the outcome has been well worth the struggles.

“[The publication] has impacted me and my classmates a lot,” Worthington said. “It’s brought us a lot closer just because we had to support each other so much more. It’s really given us a reality check and showed us that we really are meant for this. We can support our publication no matter what happens.”

Worthington said that she is proud to be a part of the publications staff because they report the truth. She said the staff will continue to publish the truth regardless of whether they receive pushback on future publications because she said it is important to inform students of real news, not biased news.

“Life isn’t all butterflies and rainbows,” Worthington said. “It’s not perfect. That’s what journalism is about. The content won’t always make you happy, but you have to report everything. That’s what our staff does, and will continue to do.”