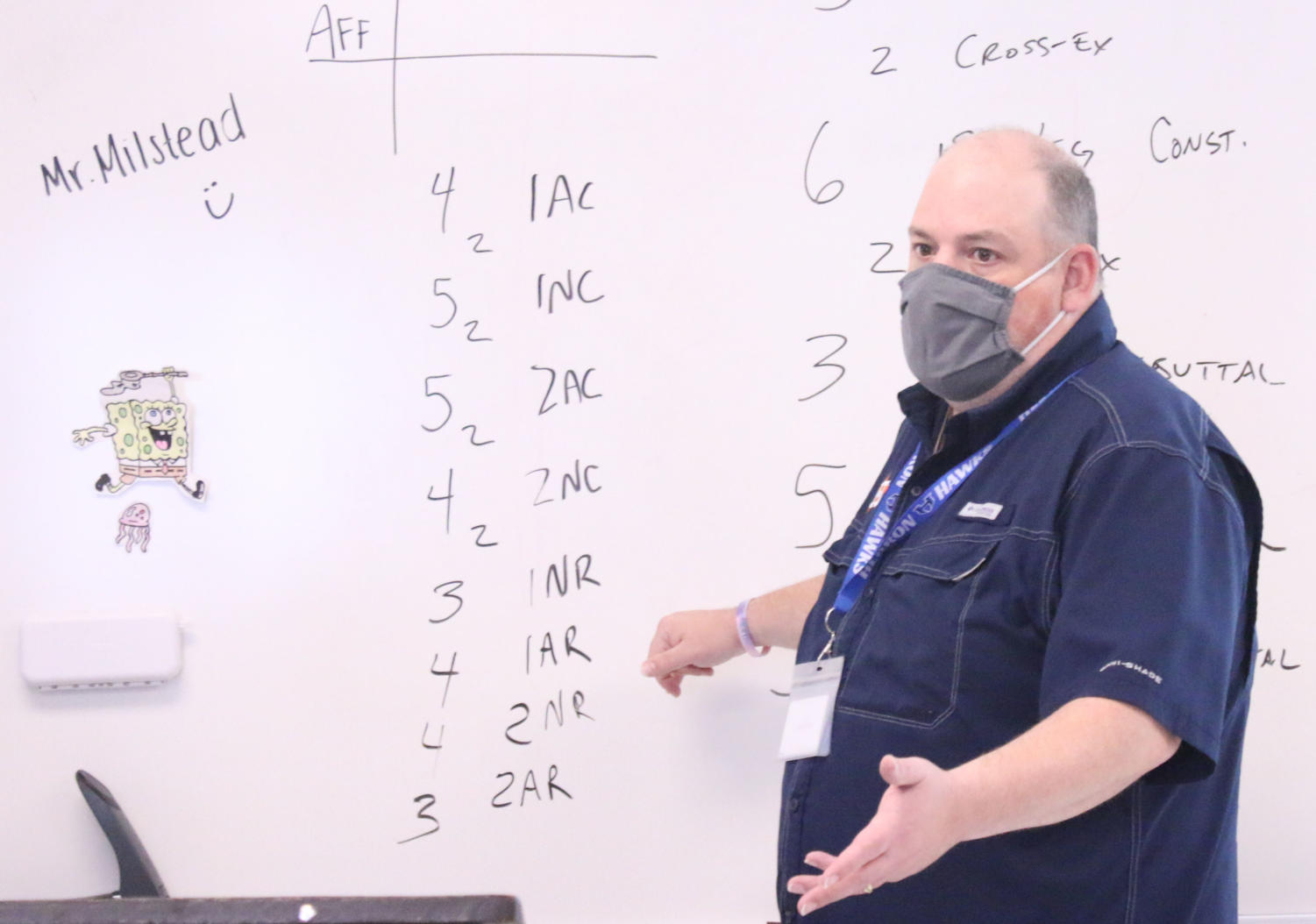 Milstead on the Move

He had everything prepared for the first day. Nervous, he asked teachers what to expect, and they told him all his plans would never be enough. He had an introduction, a survey, a list of expectations for the class, and everyone was right. The class period went by quickly, but from this experience, he now felt he knew what his students needed.

New debate coach, Keith Milstead, joined the Hebron staff last minute after the unexpected departure of the previous coach. Milstead is now the third debate coach for the Hebron team in the past three years.

“[The hiring process] was complicated and to this day, [it still has] ripple effects where I feel that I am not exactly where I want to be in terms of the classroom structure and feeling behind,” Milstead said. “There is a great support system here at Hebron. They set you up with teachers who have been here longer, for about 10-15 years, [and] everybody has been more than willing and able to answer any questions.”

Before teaching at Hebron, Milstead taught at the college level for 13 years. He started out as a graduate assistant to a full-time faculty member at the University of Arkansas at Monticello coaching debate and teaching speech. Nine years later, he and his family moved to Dallas, where he worked as a debate coach for four years at Southern Methodist University.

“At Southern Methodist, it was different because [there’s] a much higher level of scrutiny that a student must go through to even get on the campus,” Milstead said.  “The biggest difference with high school students is trying to treat them as adults because that is important to me. It’s been a bit of a learning curve from that perspective — understanding that there are varying levels of responsibility that high school [students] don’t always have that college students do.”

After four weeks at Hebron, Milstead has displayed his teaching methods by allowing students to be independent in their work. Despite an abundance of independence, students say he is helpful when they need it. At the recent debate tournament, junior Josh Ninan placed and earned one state point; this point helps him progress toward the state tournament.

“The biggest thing [Milstead] has already taught us is to relax and not [stress] about the tournament itself,” Ninan said. “He’ll joke with us and keep the mood nice and light. [Last year] with other tournaments, there was a lot more pressure [to do] really good, but with Milstead, he’s very chill. We didn’t go in expecting to win everything, but we came out [advancing] and getting a state point. Having someone like him to [lighten] the load and relieve the pressure has been very helpful.”

Milstead’s previous student at SMU, Ryan Booth, dealt with a similar high school experience as current debate students. Due to having three different debate coaches, Booth did not know what to make of Milstead, but talking with him helped him realize how impressive of a debater Milstead is.

“At a tournament, I had a ridiculous loss, and by all accounts where I shouldn’t have, and coming from a high school format where I was very successful, losing a round made me question whether or not college debate is something that I wanted to continue to do,” Booth said. “[Milstead] had a conversation with me that made me feel better—[having] the insight to describe the situation in a way where he made me realize [losing a debate] was something to overcome rather than a reason to not [continue in college]. He was such an amazing coach that [he] totally changed my opinion.”

Milstead has an extensive debate background, having won the International Public Debate Association national championship tournament six times as an undergraduate at Louisiana State University at Shreveport. As a competitor, Milstead learned how to be comfortable with speaking and wants to create that sense of comfort for his students as well.

“As a coach, the thing that I like the most about [debate] is that it gives students a new family that they can depend on inside an academic setting, but also for a long period of time,” Milstead said. “Most people who are involved in speech and debate make lifelong friendships. As a competitor and as a coach, I think it’s important to have that support system.”

Milstead’s endgame for the team this year is to let students grow to love and have fun with debate. Milstead wants students to understand that wins and losses are good, but debate has a greater purpose.

“The purpose of what we do is to think critically, learn how to research and interact socially,” Milstead said. “I openly tell my debaters I would rather them lose than want to win the wrong way. Once you build that culture, winning comes naturally, [and] my goal is to build that foundation for the students, so down the road, all of it [just] comes to them.”