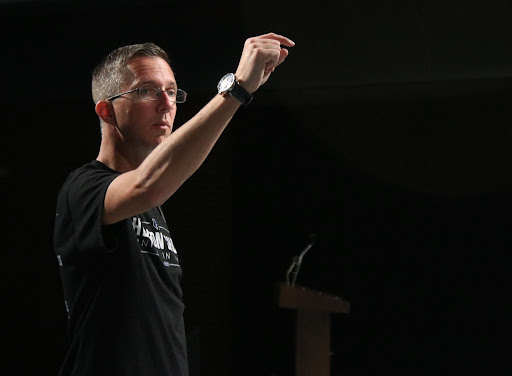 Assistant choir director, Nathan Ratliff, conducts Concert Treble choir as they practice for their choir concert. After a long day of working, Ratliff said that running gives him a healthy mental break from teaching.

Assistant choir director, Nathan Ratliff, conducts Concert Treble choir as they practice for their choir concert. After a long day of working, Ratliff said that running gives him a healthy mental break from teaching.

In the midst of the global pandemic with restrictions placed on the outside world, there was not much left to do. Every day was the same routine of going on scheduled runs with one of his dogs, taking the same boring routes over again, replayed on a daily basis — until he found a way to make it more interesting.

Assistant choir director Nathan Ratliff started tracking his neighborhood runs to avoid repeating the same routes; eventually, he progressed into running the streets of other cities. He has finished running all the streets of Lewisville and Highland Village and is 60% completed with The Colony.

“I posted [on social media] one day [saying I] was filling in streets in my neighborhood, and someone told me, ‘you need to check out this website CityStrides,’” Ratliff said. “I put all my data in and [the website] showed me [a map of] everything I had [run]. It’s fun to see the map fill up and change color [as I track my progress]. It shows [me] how many streets are in the city and gives [me] a total percentage of how much I have completed.”

Ratliff plans to keep on filling in his map as he runs, moving from city to city. He said that running rejuvenates him, especially as a teacher.

“It’s the freedom, I’m totally disconnected. It’s just me, my dog, and the sound of whatever is going on around me,” Ratliff said. “I go home and I’m tired, and going out to run is a way for me to just mentally chill out. Even though I am physically still doing work, [running] is mentally relaxing for me.”

Ratliff has always been interested in running, but it was when he got his first husky, Sasha, in 2014, when he became consistent with the sport. He has participated in marathons, such as the CowTown in Fort Worth and the Hachie 50 in Waxahachie, and plans to run all 96 miles of Belt Line Road in one weekend.

“I can’t take my dogs to every race, so clearly, I have to be more self-motivated to run a marathon,” Ratliff said. “Part of [running] is just pushing yourself and seeing what you can achieve, which creates a passion for it. There’s a great community of runners out there. [I] ended up meeting lots of friends [who I eventually started to] see at different races. It’s a new community I’m happy to be involved in.”

Over the course of the pandemic, Ratliff also participated in a virtual race with a college friend Lisa Rogers, running from Dallas to Tennessee. The main goal was to clock enough miles to reach Tennessee, but Ratliff decided to take on the challenge of running the distance back.

“Last summer, the two of us signed up for this virtual race,” Rogers said. “[We] had a three-month window to run the full distance, which was a little over 630 miles. In the four months, [Ratliff] ran and walked over 1200 miles. Like most [runners], we have our good days and our bad days but [Ratliff] is overwhelmingly positive.”

Along with this challenge, Ratliff, Rogers and another one of their college friends, Chaundra Crouch, joined a virtual race known as Circumpolar Race Around the World (CRAW). As a team, the three of them clocked their miles from either running or cycling, and the data they input on the website marks them on what region they are on the map. Currently, with Ratliff as their team lead, the team’s goal is to complete this race in about 80 weeks. The team is already in region seven out of 12.

“He’s a very goal-oriented person,” Crouch said. “Running for him is a way to refocus [and] get out of his head and [focus] on his body. He knows to do any sort of teaching or learning, it’s a very intellectual activity so [he] knows it’s good to [take a break], and running seems to fulfill that niche for him.”

Although Ratliff currently does not have any races planned for the future, aside from completing the 96 miles of Belt Line, running continues to remain a constant in his every day schedule.

“The energy that the classroom [gives] is the energy I [give] back,” Ratliff said. “I make sure I am giving all of the energy I can to the class so that I can get positive energy back from [my students]. Even though I am physically still doing work, running is mentally relaxing for me.”