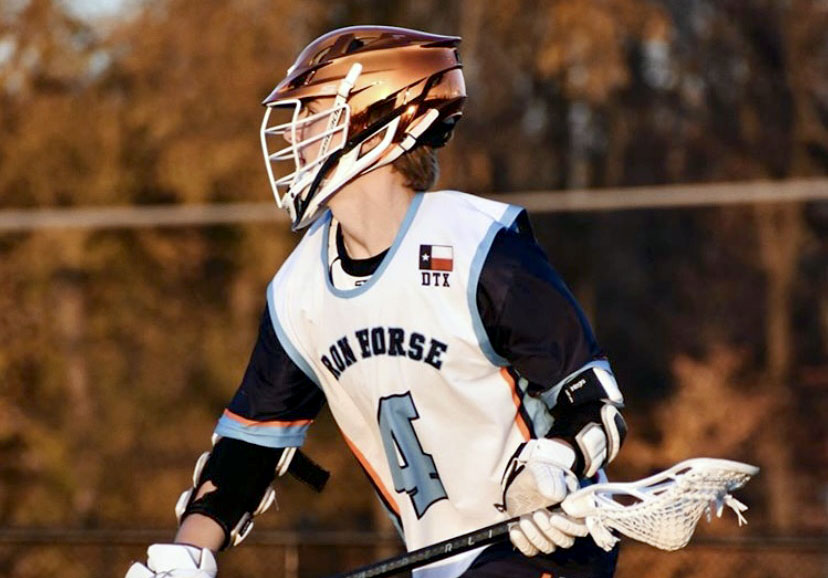 Since elementary school, senior Gage Kirkwood has dreamed of joining the military. Now, he has committed to the Virginia Military Institute (VMI), where he was recruited to play lacrosse.

On Aug. 15, Kirkwood committed to VMI, sharing the news on his social media accounts.

I am excited and honored to announce that I will be continuing my academic and athletic career by playing lacrosse at Virginia Military Institute. I would like to thank God, my family, my friends, and coaches for pushing me to get to where I am today. @IronHorseLax @VMI_Lacrosse pic.twitter.com/nnLxDQm5kN

“After a tournament [I played] in Dallas, [VMI was] interested [in me] but was still looking [at other possible recruits],” Kirkwood said. “Then they saw me play in a tournament in Baltimore, and [they] gave me a call [and an offer] afterwards.”

Kirkwood has played lacrosse since third grade and currently plays for Hebron and a club team, Iron Horse.  Kirkwood is a midfielder, a position that requires both offensive and defensive skill. In addition to playing lacrosse, Kirkwood plays school soccer — a sport he’s been playing since middle school.

“All my [lacrosse] teammates from middle school [and I] have all stayed together,” Kirkwood said. “[Also] my high school coach, Coach Surran has helped a lot in this decision and [has] helped me improve [as a player].”

Prior to his commitment to VMI, Kirkwood had been talking with recruiters at Bryant University. Although he was interested in attending Bryant, VMI ended up being a better fit due to Kirkwood’s interest in joining the military. Additionally, Kirkwood was receiving recruitment offers from division 2 and division 3 colleges.

“Before I was recruited, I went to [VMI] for a visit, and after I committed, me and the [other] commits went up for a football game and stayed in the barracks overnight with one of the juniors,” Kirkwood said. “If I didn’t commit to [VMI], I would’ve gone up to Bryant to see what it was like.”

After college, Kirkwood plans to commission, or earn a ranking in the military.

“All the work I had [done] led up to [my recruitment], and it was a really good feeling of accomplishment,” Kirkwood said. “Ever since elementary school, I’ve  wanted to join the military. Whenever [VMI] gave me the call, it was the perfect fit — it was just perfect.”