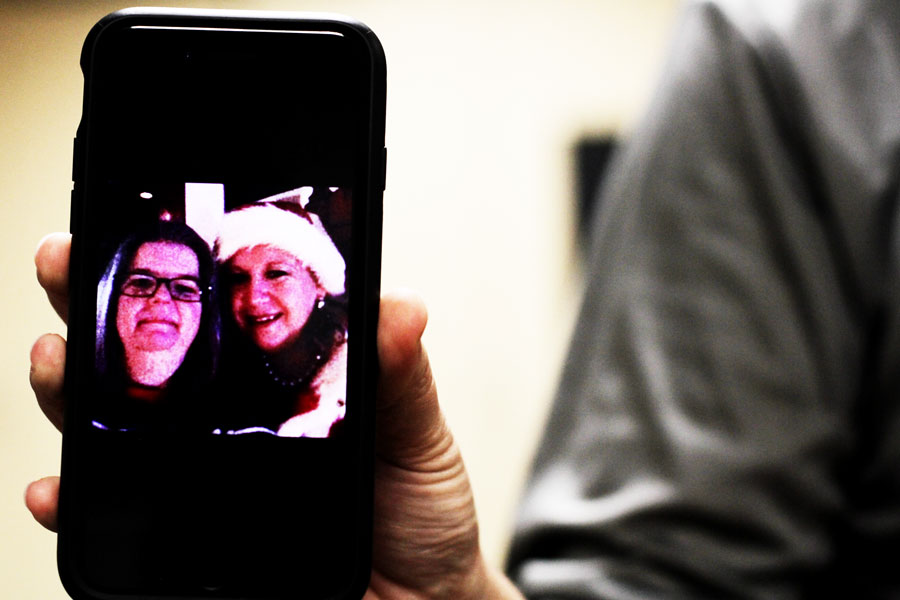 Mayo holds up a picture with her (left) and Renick (right) at a Christmas party. Every Christmas, Renick dressed up as Mrs. Claus for pictures. (Photo by Yusra Waris)

Mayo holds up a picture with her (left) and Renick (right) at a Christmas party. Every Christmas, Renick dressed up as Mrs. Claus for pictures. 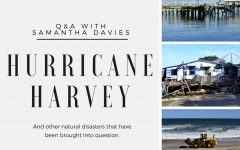 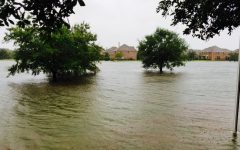 What can be done? How can I help?

After communicating with a friend, it was confirmed that her friend, Jill Renick, was missing and could be a victim of Hurricane Harvey.

On Aug. 25, Harvey, a Category 4 storm, hit Houston, destroying buildings and causing floods over four feet high. That Sunday, Renick was staying at the Omni Hotel near Buffalo Bayou, which was reported to have flooded many times before.

Soon, news about her unknown whereabouts began to circulate around the media, causing uncertainty and blurring of the order of events leading up to her disappearance.

“A friend had posted something on Facebook and I texted another friend to confirm,” Mayo said. “She said that they didn’t know where she was at the time, that they thought she may have been in one of the elevators but they weren’t sure if she was able to get out; the timeline of everything is still a little unclear.”

For 11 days, her family and friends were unsure about her condition or what they could do to help find her.

“While we were waiting, that uncertainty was so paralyzing because there was nothing that we could do,” Mayo said. “The first thing I said [was], ‘What do we do?’ There’s nothing that we could do, we just had to wait for the water to recede or wait until somebody [could] get in there. When you are in that kind of pause it’s paralyzing [and] hard to just even go through day to day.”

On Sept. 7, according to ABC 13, a maintenance worker found Renick in the hotel’s basement.

“[The investigators] think that she was in one of the elevators when they turned off the power to the hotel,” Mayo said. “When that happens the automatic action of [the elevator] is [to] go to the bottom floor [which] was the basement, and so we think she either was able to get out into the basement or was still in the elevator. I don’t know how deep the water actually got in the hotel before that point.”

A week before the hurricane hit, Renick made plans with Mayo and their friends to celebrate a friend’s birthday. After news of Renick being found, the friends decided to continue with the plan as a way to remember Renick, this past weekend.

“We were talking about [what happened this] weekend,” Mayo said. “First, there was a lot of anger around it because you are mad [that] nobody did anything sooner, but they also had to keep their safety in mind. They can’t put their lives at risk to go in to find someone who is probably no longer living.”

Although Mayo understands that people had to keep their safety in mind before taking further action to help Renick, she believes that this incident could’ve been prevented.

It feels like there is a whole other side to the story that we don’t know.”

“I hope that we get more answers than what we have gotten so far,” Mayo said. “It feels like there is a whole other side to the story that we don’t know.”

Mayo said she will remember Renick for her generous spirit and how considerate she was of people around her.

“That’s just the kind of person she was,” Mayo said. “[She was] really giving and so thoughtful and the kindest person you will ever meet. Every year at Christmas time she would dress as Mrs. Claus and we’d go and sit in the chair and have everyone take their picture with her. Yeah, that’s [one of the] best things [about her]. She’s just super outgoing and fun loving and just being around her is just a good time.”

Mayo and her friends also discussed how Renick’s passing affected them and their perspective on life.

“It is hard to wrap your brain around,” Mayo said. “But as far as life, I don’t know if I have a bucket list, or when my time is going to come or any of that. A friend this weekend was saying that she feels that there is a designated time for everybody; that you have until this moment of your life and you don’t know when that is and you can’t know when that is, so all you can do is just be the best person you can be until then.”