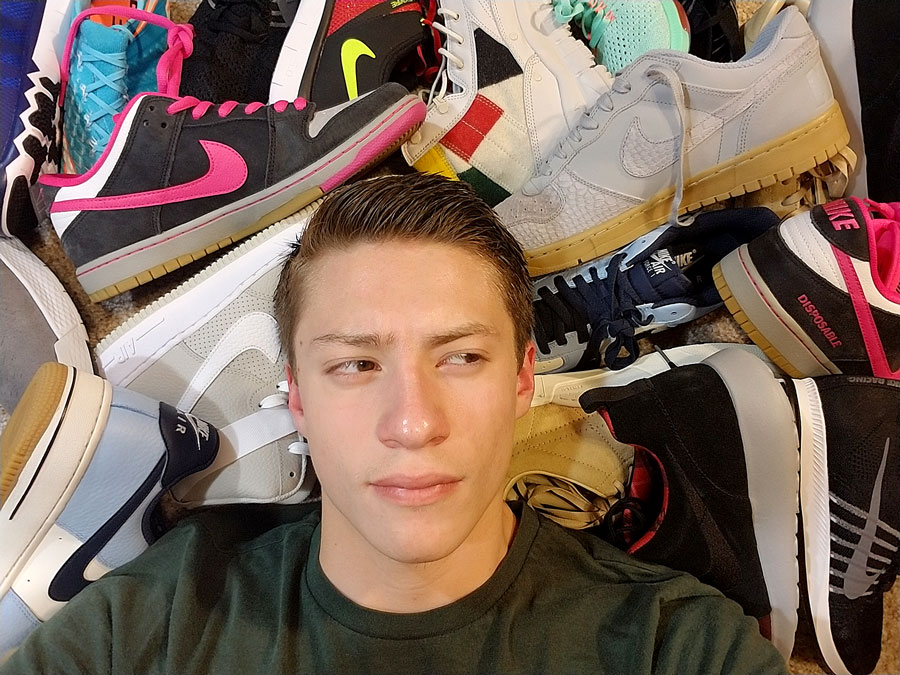 As the gas stations whiz by, he frantically tries to scribble down the varying gas prices onto his spreadsheet. He’s intrigued by the difference: why aren’t they all the same?

Since he was in elementary school, senior Grant Rainwater has been interested in finance and business. His intrigue led him to start an online business through eBay his freshman year.

“I’ve always liked business,” Grant said. “I had some stuff lying around at home and I decided ‘hey, [if] this is sitting here, it could probably make some money online.’ I noticed how cheap everything was [at stores], so I figured there [are] people who will sell this online for more.”

Grant primarily buys Nike gear, like shoes and clothes, from a Nike outlet store and sells it online. An employee at the outlet knows about Grant’s business and lets him know about new stock. Sometimes, he sells anything he can get his hands on, even a go-kart.

“Right after Christmas, Walmart [had] a lot of their toys on clearance, so I dragged my sister, who was home from college on break, to Walmart and I got this go-kart,” Grant said. “It was a razor go-kart and it didn’t even fit in her car. It rode shotgun; I sat in the back. I eventually sold it and it was a pain to ship, but it got there.”

Grant started by selling small things in order to get customer feedback so that other customers would be inclined to buy his products. Once he started getting attention, he learned a few things like how to deal with interesting customers.

“Another thing I’ve learned [about] are trends,” Grant said. “I have stuff that just sits and sits and eventually sells. I tried [selling] men’s western boots and those took forever to sell, so I figured maybe the market for that isn’t as open as it is for Nike [gear].”

He just got really mad [at me] and kept firing back emails and [saying] ‘you can’t talk to me like that.’ He eventually filed a claim with eBay. EBay covered the loss. They gave him his money and they gave me [mine].”

Even though he’s had his fair share of weird customer incidents, Grant’s favorite one is about a customer from Brooklyn.

“About two years ago, this customer bought a pair of shoes and gave me his address,” Grant said. “I shipped them out and he said he never received them. I pulled up the tracking and it showed everything was fine; it got delivered. So, I [told him] to check with his apartment and make sure they got it. He just got really mad [at me] and kept firing back emails and [saying] ‘you can’t talk to me like that.’ He eventually filed a claim with eBay. EBay covered the loss. They gave him his money and they gave me [mine].”

Grant’s parents, Greg and Anna Rainwater, approve of his business because, according to Grant, they don’t have to give him money since he has his own income and because it doesn’t take time away from his school work. Grant gets to pocket whatever is left after he pays for shipping the item and after eBay takes 10 percent of the sale.

“He has a very packed schedule since he was a freshman because of, not only the rigor of academics, [but] extracurricular activities [and] church,” Greg said. “He has never been able to work a typical after-school job because he swims for a club team.”

Early in the business, Greg would buy the items and every three months, Grant would reimburse him after having sold the products. During the last two years, though, Grant has made enough money to fund his own purchases, learning along the way about important aspects of business.

“It’s a lot of work,” Greg said. “It’s not just buying something and posting it. You have to take pictures, put descriptions up and answer emails from prospective buyers. Once the item is sold, you have to package it up and mail it as soon as possible. Then you have to deal with the customer, occasionally, who may be a little difficult to deal with. Outside of [earning] some additional pocket money, [Grant has] learned a lot about basic business principles: marketing, accounting, researching products, customer service.”

Grant hopes to attend Texas Christian University, where he attended an investment camp over the summer. He plans to major in accounting and is submitting a written piece about his business alongside his application to the university.

“I think he kind of gets a kick out of seeing how much money he can make off of something he hasn’t paid much for,” Anna said. “[His business has] been good for him because he’s so math-minded, he enjoys numbers and saving money as well as earning it. [The business] has also helped him to make a decision as to what he wants to do when he goes to college studying business and finance.”

According to Greg, a lot of people don’t realize how much hard work goes into Grant’s business. In fact, sometimes people don’t take him seriously.

“When he tells people he’s self-employed and has his own eBay store, the response is often ‘that’s not a real job’ and it’s because others don’t really know all the work that goes into it,” Greg said. “You can’t post things, sell [them], and say ‘oh I’ll ship it in a week.’ He’s very driven and determined. He likes to see things through completion. This is a job for a person who’s willing to take initiative and commit to doing this.”