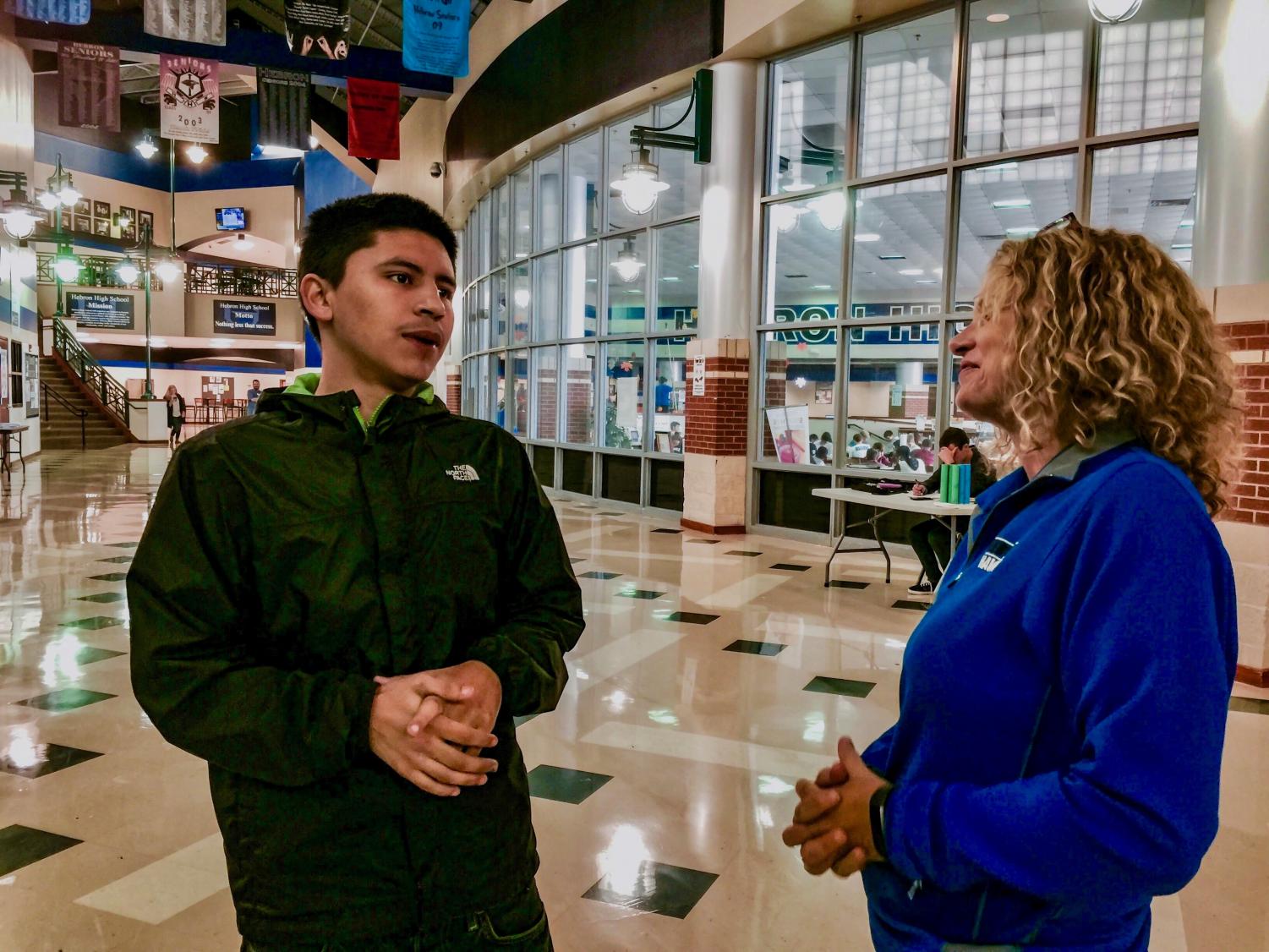 Daniel Elizardo discusses his plans for his future with assistant principal Sandra Lee. Elizardo said he wanted to open up a barber shop and pursue tattooing as a career. (Photo by Yusra Waris)

Daniel Elizardo discusses his plans for his future with assistant principal Sandra Lee. Elizardo said he wanted to open up a barber shop and pursue tattooing as a career.

The seizure that saved his life

Student finds motivation to turn his life around and receives diploma

He wakes up to the blinding light of his hospital room; the room was mostly silent, apart from the whirring of the machines regulating his heart rate and his tense breathing.

The last thing he remembered was walking out of class at the Learning Center and talking to another student, the rest was hazy from there.

Doctors told him he had a seizure: that he blacked out and had no control over himself. At that point, he did not know what he was feeling. There was some anger: toward his situation, his actions, his life the couple of months leading up to this day. As he gradually regained full consciousness, he did know one thing for certain: he had hit rock bottom. He realized he needed to get back on track, go back home and set his priorities straight.

Now, former student Daniel Elizardo has overcome homelessness, drugs, and other obstacles and recently obtained his diploma in September – something he thought he would not be able to accomplish.

“[When I got my diploma], I didn’t even know what to feel,” Elizardo said. “I was just looking at it and thought that hard work really does pay off. I’m really happy I got it now because if I didn’t, I would’ve been dealing with a whole bunch of stuff regarding bills. Sometimes it’s still hard for me to get to work, but I find my ways. I was happy when I got it. Now that I got it, it gives me more of an opportunity to do something.”

In the months leading up to his seizure, Elizardo was arrested due to an altercation with his father; he was bonded out a couple of days later. After his release, he decided to leave his home and ended up missing about two months of school, mainly trying to find a place to live.

I didn’t even want to come to school [because] to me, around that time, money was the only thing that I had on my mind.”

“I was pretty much living in the streets,” Elizardo said. “I was sleeping in friends’ cars; sometimes I would have to sleep by the train tracks. I didn’t even want to come to school [because] to me, around that time, money was the only thing that I had on my mind. [I didn’t want to be around the] people here [because they] don’t understand that. They are quick to take everything for granted and I’ve been down and out not having anything.”

Through the money he earned by hustling and with help from his friends regarding bills, Elizardo was able to save up enough money to live at a hotel for three weeks.

“I was barely making any money and I needed to support myself,” Elizardo said. “I just [had] to do what I needed to and I just kind of hustled: get stuff and sell it. I’ve always known how to do that; the people I’ve been around taught me how to do [that] because that’s the only chance that they [had] from where they are from.”

Since Elizardo’s sophomore year, assistant principal Sandra Lee monitored his progress and attendance to make sure he came to school and stayed out of trouble.

“Daniel was a hard case,” Lee said. “He had so many obstacles and some of them were self-created and sometimes Daniel couldn’t see what was possible because he was so wrapped up in surviving. When you are homeless and trying to find out what you are going to eat, that becomes your focus; school is not top priority. And Daniel was a hustler; his reputation preceded him, but he was always very respectful and listened.”

Elizardo felt Lee was one of the only people able to motivate him to come to school and find a way to graduate. During the summer of his senior year, Elizardo had to take a summer elective course to make up for some of his credits in order for him to receive his diploma.

“No one saw me graduating,” Elizardo said. “I didn’t even see myself graduating because if no one believed in me then why should I believe in myself? So Ms. Lee really was the only one [who] told me that I can go out and be whatever I want to be if I work for it. People have parents that tell them ‘hey you can go out and be anything,’ but I didn’t have anyone who told me that. Ms. Lee was probably the first.”

Elizardo’s mother, Glendy Garcia, said getting the call from the school about the seizure was one of the scariest moments of her life.

“As a mother, you never want [anything] to happen to your children,” Garcia said.  “The minute I got the call from the school, which I always did, I knew something was wrong. [When] the assistant principal said, ‘we’re taking [Daniel] to the hospital; he had a seizure,’ my heart stopped. I didn’t cry. I just grabbed my purse and told my boss I have to go. When I got to the hospital and saw him on the bed, it freaked me out, but I still went up to him and told him I was there and for him not to be scared, he would be OK, and that I loved him. And [when] they took him for X-ray, the minute they took him, I lost it [and cried].”

Now looking back at his seizure, Elizardo and Lee believe it was the turning point in his life that helped motivate him to go home and focus on doing better in school.

“He had to get to the point where he wanted it,” Lee said. “When [he] woke up in the hospital and realized it could’ve been worse, that was [his] rock bottom. A lot of people don’t start building until they hit rock bottom, and I think down deep he really wanted it, but he was just confused on how to get there.”

Elizardo plans to pursue tattooing and opening up a barber shop. He also hopes to talk to students who are struggling with the same problems that he was going through and aims to inspire them through his story to work harder in school.

“I know there are a lot of kids like me,” Elizardo said. “I feel like maybe I can motivate them not to do [what I did] and better themselves. But at the end of the day, I can tell them one thing and they’ll just do what they want to do. All I can do is try to persuade them, but it depends on how they take it.”

From his experience of living in the streets and trying to find a place, Elizardo has learned an important life lesson that he hopes to share with others.

“Nobody cares, the way I see it,” Elizardo said. “I’ve been down and out and people did help me, but at the end of the day, I was on my own. You’ll get a little bit of help, but you can’t depend on them to help you out because you aren’t going to get any free tickets out here. You got to get it out on your own.”