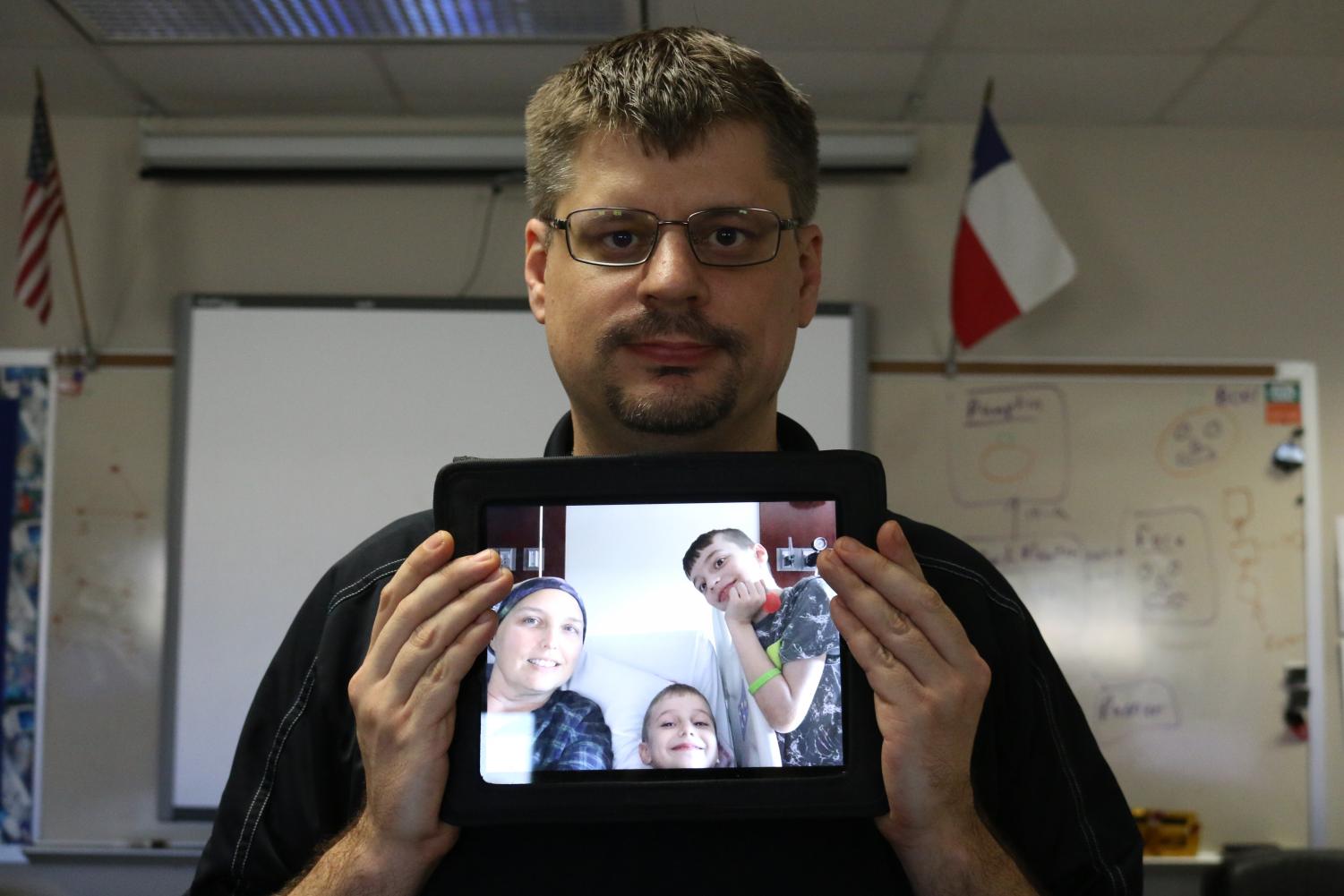 Mr. Stites poses with a picture of his wife and two sons. They were visiting her in the hospital. (Photo by: Sydney Gray)

Mr. Stites poses with a picture of his wife and two sons. They were visiting her in the hospital.

Taking cancer a day at a time

When computer science teacher Jared Stites awoke in the middle of the night to his wife crying out in pain, he had no idea that it would be the night his family’s life would be turned upside down. With an unceasing pain near her spleen, a series of scans concluded the problem was something Jared said he didn’t expect.

His wife, Leah Stites, had developed a rare form of cancer that had begun to spread to the rest of her body.

Leah has been diagnosed with Non Hodgkin’s Lymphoma, a type of cancer that occurs when the body produces too many abnormal lymphocytes, a type of white blood cell. Leah was originally diagnosed with advanced stage Follicular Non Hodgkin’s, which means the cancer is slow-growing, but it had already begun to enter into her bone marrow. But soon after, it was discovered the cancer had begun to spread and mutate into Double Hit B Cell cancer, a rapidly-growing form of cancer that can be treated with intensive chemotherapy.

Leah will undergo a form of chemotherapy that will take five days to administer for each treatment. She will be admitted as a patient to the hospital every three weeks to receive the treatment and will stay there for one week. The treatment will occur every three weeks until February, and then she will be reevaluated to decide what treatment will be needed next. Leah and Jared have two children who are both under the age of nine, and Jared said they are trying to find a way to help their kids understand what is going on with their mom.

“Given the intensity of [the chemotherapy], it makes it very hard for [Leah] to function,” Jared said. “We have two kids: Drake is in third grade and Jace is in preschool. They are having to do a little bit more, and I’m trying to get them to understand that their mom has a serious sickness, but hopefully someday she will feel better. They’re having to grow up a little bit more quickly and I’m having to take on a lot.”

Jared said that on top of the treatments and hospital visits, it has been hard for him to take on the extra work that is coming with the changes from Leah’s sickness.

“It’s been hard to do day-to-day things like finding time to make something for dinner, or  mowing the lawn, so we have a support site that people can sign up to bring us things or help us with daily tasks,” Jared said. “My life is completely upside down now.”

Although there are hard days and more responsibilities to take care of, Jared said this is shaping who he is as a person because it has changed his outlook of his life.

“Things like this really challenge your character and change your perspective,” Jared said. “It’s really easy to get wrapped up in the mundane and forget about the big picture and what’s most important. It’s crazy to me because you’re so wrapped up in the treatment, but trying to not let it define you, even though in a way, it does. It changes your life so much, and in the back of your head there are always uncertainties of what might happen, but it gives you more appreciation for what you take for granted some days.”

Leah works full time as a substitute in Frisco ISD and does work around the house for her family. She also is a part of book clubs, attends social gatherings with friends and makes her own jewelry. Since the start of her treatments, Leah said she can no longer stay as busy as she used to due to the intensity of the chemotherapy, and she is thankful for all the help she and her family have received so far.

“I’m pretty much couch bound,” Leah said. “During a treatment week, I’m in the hospital, so I see my kids and husband for a couple hours a day. The week after treatment, I’m nauseous, tired, and in pain. I do my best to help around the house but really, aside from a little laundry, I really can’t do much. We have had so many people help us; we have had monetary donations, my friend started a meal train, I just created a volunteer calendar, and it was requested that we make a GoFundMe, so I made one.”

While the process can be difficult, and there is a long road ahead, both Jared and Leah said they try to take things slowly. Jared said he does his best to find helpful ways to spend every moment, even if it’s something small like finding a way to stay calm in a stressful situation.

“It’s really hard to look at it as such a long-term thing, because it’s going to be really challenging for a long time,” Jared said. “[We] have to take it a day at a time, and some days I have to take it an hour at a time or maybe even five minutes at a time. I have to break it up and ask myself ‘what can I do for the next ten minutes to help out?’”

Despite all that has happened to her and her family, Leah said the support from her friends, family and community has helped to change her outlook on a bad situation, and that she will continue to fight to recover and push through the treatments.

“All of the contributions we have received: the meals, the positive words and prayers, have all made me so grateful for the people we are surrounded by,” Leah said. “Your continued support is appreciated. This has been an overwhelming experience in so many ways.  I am humbled and feel incredibly loved. Thank you all so very much for everything.”

With chemotherapy that takes a week to administer in the hospital and only two weeks to recover in between, Leah said that it is hard to look too far ahead into what the future might hold, and that for now, she focuses on the next few weeks at a time.

“Right now, I look forward to the week of normalcy,” Leah said. “It’s the bright spot. I don’t often think far ahead because things can often change with my treatment. Honestly, with this type of cancer, I look forward to a stem cell transplant. Once that is done, I feel I will breathe easier.  These next few months will be difficult, but I am positive I will make it through this.”