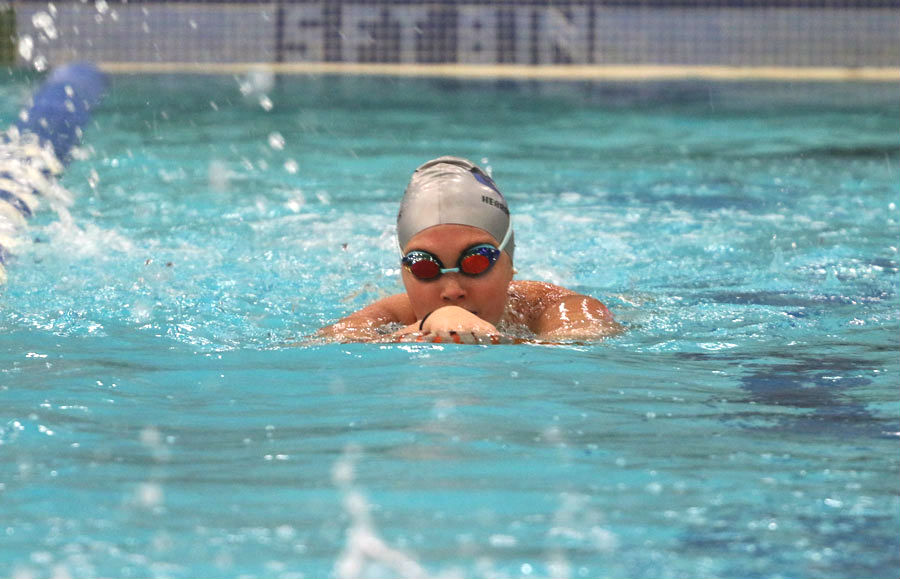 Senior Mackenzie Garcia practices her kicking technique during morning practice. This is Mackenzie’s fourth year on the Hebron swim team.

Mackenzie has received a 4-Pent Award all four years of her high school career. This award represents the swimmer that sets a record district-wide by obtaining the highest points during a district meet.

“When I found out I got it all three years, since it is my last year, I really wanted to get it [again],” Mackenzie said. “It felt good [when I received it, and] I was proud of myself for setting that record [this year during the district meet].”

At age 3, Mackenzie was introduced to an official swim team when she lived in Cancun, Mexico and started competitively swimming at age 4. Beginning at a young age, she said she was able to build her passion for the sport with the inspiration of her coaches.

“I can remember when we went to talk to the coach, he said that she was [too] little to know what she was doing and kind of brushed it off. But when she started school, the teacher recommended her and he was surprised to see that she knew her different strokes.”

Mackenzie’s biggest inspiration is her dad, who moved to Qatar when she was in seventh grade. She said her dad has played a big role in her swimming by motivating her to be a passionate, hard worker like him.

“His goal for me is to always try in swim, like if I break this record, I can do anything,” Mackenzie said. “He’s over there and I’m over here, so if I break a record, he can be proud of me over there.”

Mackenzie has competed in various competitions across the board in district and region meets and at Texas Interscholastic Swim Coaches Association (TISCA) events.

She was really a natural. She started swimming [before the age of one], like a fish [in] water. ”

“I think [the coaches] helped me by showing me that I have the potential to be up there and the ability to be seen,” Mackenzie said. “If I go to [any competitions], it shows that I put my time and effort to get to that point. You get it from trying, listening to the coach and being motivated.”

Mackenzie has been on the swim team all four years of high school. Along with this, she is on a team for Metroplex Aquatics Club, and works at the pool outside of school as a lifeguard and coach.

“I think as [each year goes by], you move up,” Mackenzie said. “You push [teammates] to do better and cheer each other on. [We say] just because you’re not the fastest person on the team, it doesn’t mean you’re not good. No matter what, we just push each other to do good, no matter what place you get or how fast your time was, our team just gets bigger and bigger, and we grow as a team.”

After looking into many colleges, Mackenzie has received a scholarship to Drew University in New Jersey. After being in contact with the swim coach at the university, she is still deciding whether to pursue a future at Drew or elsewhere.

“I’m still indecisive because I’m scared to make that move and scared that I might regret it,” Mackenzie said. “But I think I’m just going to do it because it’s a big deal to get out of college without debts and it would play a big role [in making my decision].”

Although Mackenzie said she had some downfalls her junior year due to her wanting some time for herself, she did not quit swim.

“I’m extremely proud,” Sue said. “Because she hasn’t had much time for anything else because of swim. Being in high school, you want to be able to do other stuff. She had her downfalls, but she never gave up. She was able to balance school and swimming, and still get a remarkable scholarship.”

As a senior, Mackenzie said she has realized she needs to work harder this year in swim than her previous ones.

“[Swim is the main factor] that defines me,” Mackenzie said. “It helps me if I have a bad day; it lets me take out my anger and energy. If I quit swim, I know I wouldn’t have done anything this year, just my classes. But swim is the big factor of my high school career, and it’s taken me through so many things, like being able to be seen by colleges and get a scholarship for it.”