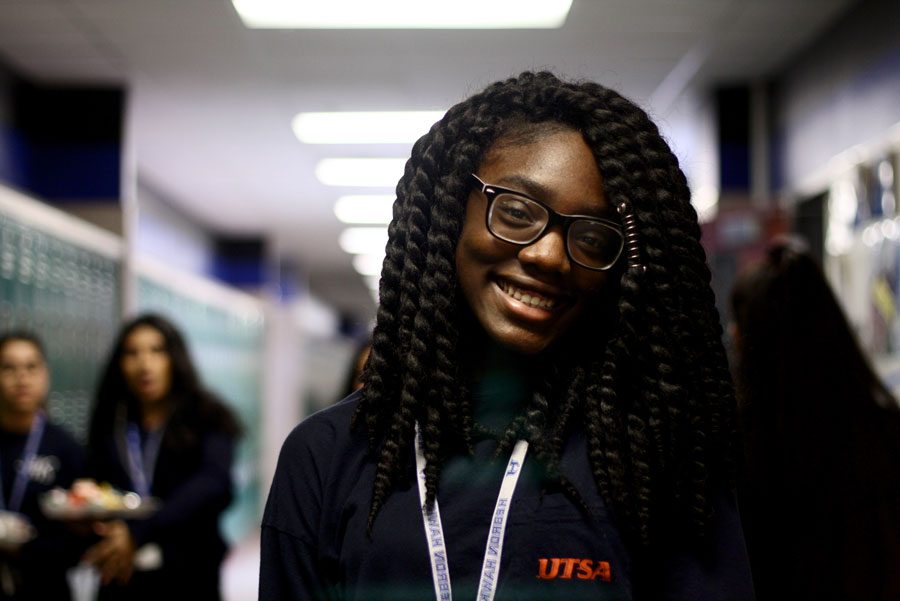 With 16 other family members living under the same roof, junior Oluwakemi Ajetunmobi never felt a dull moment while in her hometown Lagos, Nigeria.

After moving to the United States in 2014 for job opportunities, Ajetunmobi’s family shrank to a quarter of the size it was back at home: it was just her, her sister, mother, and step-father. About 6,500 miles away from home, Ajetunmobi said she initially had trouble fitting in since she was overwhelmed by the changes in her lifestyle.

“It just really kind of made me shrink into myself when I got to school,” Ajetunmobi said. “Now [that] I have a small family and a huge school, I built this wall because so much had changed. I didn’t know what to do with myself anymore and it took a lot to actually [consider myself as] an American.”

During freshman year, Ajetunmobi said she tried to hide her accent to avoid getting bullied, and when classmates found out where she came from, they would ask her questions like if she “rode a lion to school.”

“[Even though] I’ve heard everything they could say, I still get defensive,” Ajetunmobi said. “Sometimes I don’t even want to tell people that I am [Nigerian] because everyone is going to say something different and it isn’t always good. I’m not ashamed of where I come from, it’s just people can be very rude sometimes.”

Due to starting school one year early and different academic system in Nigeria, Ajetunmobi, at 14, is currently a junior, while she would have been a freshman here. While schools here follow a four-class per semester or 8-class school year, Ajetunmobi said she was taught 21 subjects a week, which she said made it easier for her to handle her current class load.

“When I came here, my transcript transferred here easily because I had most of the credits that I needed and more than I was supposed to get in freshman year and eighth grade,” Ajetunmobi said. “I remember this one time in eighth grade we [were] having finals back-to-back and the people started [complaining]; I was confused because back there we have four finals a day back-to-back so I was chilling thinking ‘is this supposed to be a big deal?’”

Ajetunmobi said being an immigrant, despite the possible stereotypical comments, has helped her evolve socially.

“When you tell people [where you are from], they obviously build the type of person you are in their head and it is hard to get out of that mold,” Ajetunmobi said. “But I think it is more of a positive thing because in that way you are different from other people and it is just nice talking to people about it.”

When Ajetunmobi visits her family in Nigeria, she said she is eager to show off her American culture and vice versa here. This year, Ajetunmobi said she fully adjusted to the lifestyle in America.

“I’m just trying to make my worlds fit and be cohesive with each other because I can’t be one without the other,” Ajetunmobi said. “Before, I wouldn’t claim being American, but now I’m both. I’m Nigerian and American.”