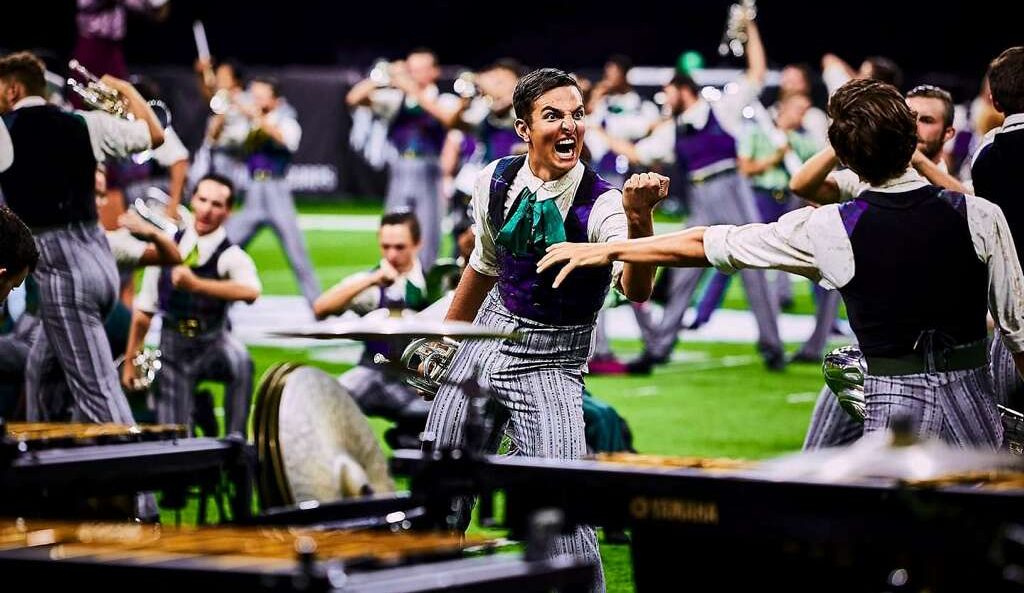 Rezazadeh performs “The Wrong Side of the Tracks” with the The Cavaliers. The show included music by Christopher Rouse, Thomas Newman, Donald Grantham, Mike McIntosh and Clif Walker and placed fifth at the DCI World Championships. (Via The Cavaliers media team)

Rezazadeh performs “The Wrong Side of the Tracks” with the The Cavaliers. The show included music by Christopher Rouse, Thomas Newman, Donald Grantham, Mike McIntosh and Clif Walker and placed fifth at the DCI World Championships.

Via The Cavaliers media team

A Step Above the Rest

Senior spends summer with The Cavaliers Drum and Bugle Corps

He walks onto the field of Lucas Oil Stadium to the sound of a full crowd cheering. He sets up his microphone with the pit and finds his starting position on the field to perform in Drum Corps International World Championship Finals. He’s rehearsed for countless hours, played reps over and over again and poured his heart and soul into this show. He thinks to himself, “dang, this is the last time I get to do this,” as he puts his horn up and starts playing.

Senior Zach Rezazadeh spent his summer on tour with The Cavaliers, travelling coast-to-coast performing their show, “The Wrong Side of the Tracks,” in competitions through the Drum Corps International (DCI) organization. DCI is the professional league of marching band – corps are mostly comprised of college students who go through an extensive audition process. Contracted at 16, Rezazadeh was one of only four boys in the corps who hadn’t yet graduated high school. Although his age in the activity is already uncommon, Rezazadeh was also the first chair mellophone and a soloist; in fact, he had three different solos throughout the show.

“It was stressful at first because I had a lot of the show riding on me,” Rezazadeh said. “I had to learn how to deal with [the stress] and how to perform, essentially. I really learned how to be a performer and how to maximize my abilities even when times were stressful and I was tired.”

DCI audition camps start around November, and the students get to experience a weekend in the life of the corps while being evaluated on marching skills and musical ability. Most only get a callback, but Rezazadeh was offered a contract with The Cavaliers a week after he went to his first audition.

“I was pretty nervous going into it,” Rezazadeh said. “I walked in and met a room full of dudes and it was pretty intimidating, but everybody was really nice and our corps director introduced himself to me. The audition experience is what got me hooked in the first place.”

The Cavaliers is one of the 13 founding corps of the DCI organization, a seven-time world champion and the only all-male group left. This year, they placed fifth in DCI World Championship Finals.

“The vibe of the Cavaliers is that we’re all just dudes,” Rezazadeh said. “We use our masculinity in our shows and as almost a fear factor for other corps because no other corps has that kind of connection internally that also exudes outward from the entire corps. It’s a lot of high energy.”

The Cavaliers kicked the summer off with a couple weeks of spring training and faced long rehearsal days of three four-hour blocks all season. Add traveling more than 10,000 miles across the country on charter buses, sleeping on air mattresses in high school gyms and having a couple days off at most, and that’s a normal DCI summer.

“It’s just a lot harder [than high school band],” Rezazadeh said. “It’s mentally harder. It taught me how to get through the hard days – even if you wake up in the morning and you’re like, ‘man, I really don’t want to do this.’ You just have to.”

Most corps members are around 19-20 years old. Rezazadeh said having older members results in staff being more relaxed and the corps being more mature. He also mentioned that rehearsals are more high-energy, which translates into performances.

“Before every performance, there were these chants we’d do and we would scream splooie (an inside joke to the corps),” Rezazadeh said. “We had a whisk – this giant three foot long whisk – and by the end of the season it was literally shrapnel because we would beat it up against the props and we would jump on the props and yell.”

“At the Cavaliers, I learned that no matter what anyone thinks, I’m myself and that this self-confidence I have in my personality and my well being is what really matters in the end,” Rezazadeh said. “I learned how to accept myself and love myself. There were a couple of days when we were working through stuff as people, not as a drum corps, when I would go back to the dorms we stayed in for spring training at night and just cry because I had learned so much about myself that I never thought I would.”

Junior French horn player Jackson Staton has been friends with Rezazadeh since they were in middle school. Staton said Rezazadeh is the person he looks up to in band and that he has inspired him to do DCI himself.

“Drum corps seems like this scary big deal, but he came back and he loved it and that made me want to do it even more than I already do,” Staton said. “Just because of what he’s told me about it and how much fun they have, and how he’s grown as a person because of the activity.”

Band director Travis Pruitt works in the summer with the Bluecoats, another drum corps that placed 2nd in DCI World Championship Finals this season. He thinks Rezazadeh has shown a lot more maturity since he’s returned from his experience with The Cavaliers.

“I think Zach has come back with more knowledge and skill,” Pruitt said. “He’s done a really good job showing his section mates and fellow band members the things that he’s learned in a very positive way, which I’ve been very pleased with.”

Rezazadeh hopes to continue spending his summers performing with The Cavaliers until he turns 22 and ages out.

“The staff told us all season we weren’t performing the show to enjoy it,” Rezazadeh said. “That we weren’t going to enjoy ourselves in the moment and that our job is to perform so well that all those people out there in the audience enjoy it. It was our job to perform for them. So we did that. At the very end of our show, we all fell on the ground like we died, and they told us, ‘at the very end, when y’all all fall down and die, that’s when you can start crying.’ And so I did. I definitely started crying when I fell on the ground and died. It’s amazing to me that I still have five years left and I felt that way.”