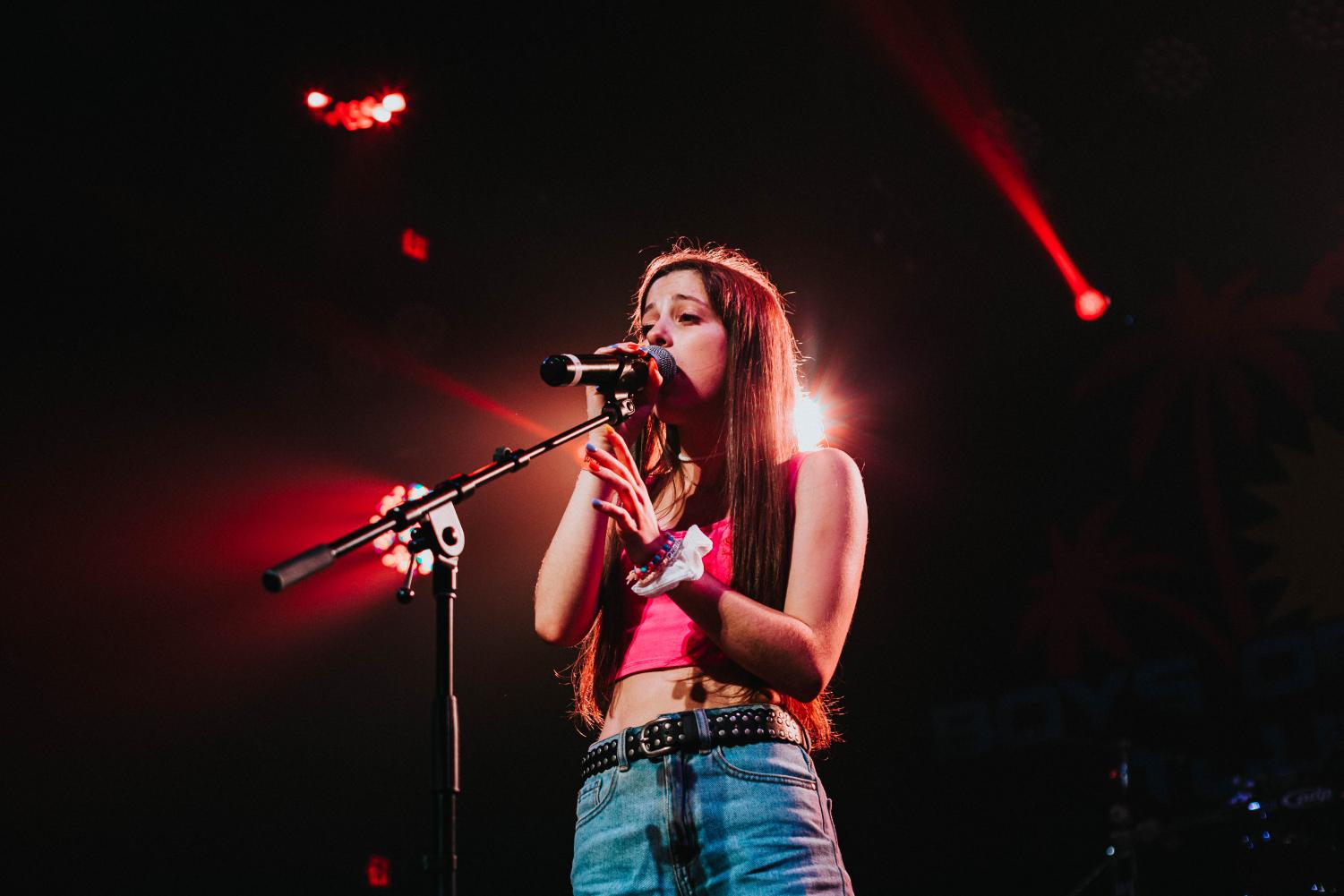 Senior Ashley Newman performs for the Houston crowd on July 22. She sang her single “Photos” along with her unreleased song “Fakin’ the Feeling.” (Photo by @damagedmoments)

Senior Ashley Newman performs for the Houston crowd on July 22. She sang her single “Photos” along with her unreleased song “Fakin’ the Feeling.”

The moment she steps on stage, cheers from the crowd bounce off the walls. Her voice rings throughout the venue, invigorating the crowd. Hundreds of fans from across the country attend her shows, anticipating the unique sound and vibrancy she brings to the stage.

Senior Ashley Newman’s love for music began after an injury in 2016 when she broke her arm during a cheer practice as a freshman. Afterward, Newman thought there was nothing else she could pursue in life until she found her love for singing. Due to her drastic fan growth on social media platforms such as TikTok and YouNow, Newman has toured the country to sing for and meet up with her fans.

“I started on YouNow and then I realized that it wasn’t a big enough platform to help me grow further,” Newman said. “So I saw that TikTok was coming back, and I was like, you know what, I might as well try. Eight months ago, I started my TikTok and then I’ve continued my singing through [the app].”

On the tour, Newman had been paired with two-time Grammy Award nominee, LA-based music producer Alex Cantrall, who she describes as a second dad.

“It was literally the best experience of my life,” Newman said. “I love Alex to death. He’s always there for me in and [out] of the studio. It’s so cool to work with someone so humble and who has accomplished so much.”

The “Boys of Summer” tour that Newman was a part of traveled for a month to Los Angeles, New York, Phoenix and more. Newman had always wanted to go on tour, and once she heard that the Boys Of Summer Tour was about to kick off, she knew she had to join.

“I always saw people going on tour,” Newman said. “So I told my producer, “Alex, we should try to get me on Boys Of Summer because my EP (extended play)  is coming out around the same time.”

Along with touring the states, Newman released her first single, “Photos,” on July 12, and performed the song and more for her fans.

“I sang ‘Photos’ along with one of my unreleased songs called ‘Fakin’ the Feeling’, and I sang two covers,” Newman said. “One with the ukulele and one with an Ariana Grande track.”

However, the tour wasn’t always exciting. A typical morning on tour would consist of waking up at 8:00 a.m. in the morning, arriving at the venue at 9:30 a.m. and then leaving the venue 12 hours later just to repeat the process again the next day. On top of a busy schedule, Newman said she frequently dealt with stage fright.

“I think what I was most worried about was my performance,” Newman said. “I get a little bit of stage fright anytime I go on stage, but it wears off whenever I’m up there. I just didn’t want to disappoint anybody, because they’re all paying to come see us perform and meet us.”

Newman’s mother, Linda Newman, said she was surprisingly calm and relaxed when it came to her daughter on tour.

“You would think that I would have been nervous about it, but I really wasn’t,” Linda said. “I felt pretty confident about the group she was with and I really trusted her to do the right thing. I just really thought that it was a great learning experience for her.”

Following the end of the tour, Newman planned for her EP to be released by the end of this year and is looking for a management to sign with. Senior Avery Evans said Newman has done so much in her career already and has more music coming in.

“She has a single out and that’s pretty cool because she’s taking trips to LA,” senior Avery Evans said. “She did a lot of covers and music videos for those covers. She’s recording more music and has an EP coming out soon. She definitely is intending on going on the Boys of Summer tour again next summer. Her ultimate goal is to tour her whole life.”

“In general, tour was just such a good experience and a good place to grow and to meet other people,” Newman said. “It was such a good collaboration and getting to spend time with and become family with a group of other kids who do what you do. Hopefully I’ll go on tour again because that’s something I want to continue doing for my whole life. Being able to tour, meet fans, and perform.”