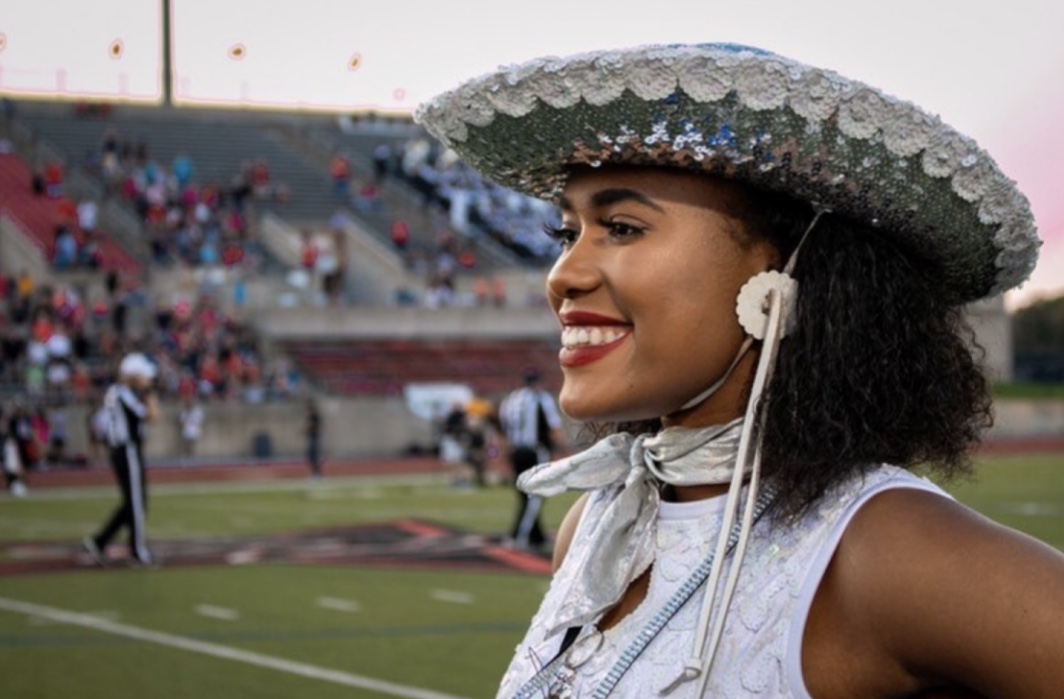 Senior Mariah McCardell smiles to the crowd during a football game at Coppell on Oct. 4. McCardell is the first African-American captain for Silver Wings. (Stephanie Smith, Silver Wings team photographer)

Senior Mariah McCardell smiles to the crowd during a football game at Coppell on Oct. 4. McCardell is the first African-American captain for Silver Wings.

Making it big in the dancing industry was 13-year-old Mariah McCardell’s dream. Ever since she was 2 years old, she was dancing in her living room, asking her mom if she could become a ballerina. Her mom would always respond with, “OK, you have to get potty trained first.’’ McCardell wanted nothing more than to dance professionally.

Now a senior, McCardell is the first African-American captain for Silver Wings and also cast to play Sebastian in the upcoming school musical,“The Little Mermaid.” McCardell has been a part of Silver Wings since she was a freshman and was a junior lieutenant last year. She said there is a lengthy process that comes with becoming a Silver Wings captain.

“It’s about a three-to-four month process, which starts with a meeting for people who are interested in being an officer,” McCardell said. “Then you have to come up with a potential theme for spring show, you have to make up a minute and a half solo, you have to learn another dance from the outgoing captain, and [then] you have to perform what’s called an officer strap, which is the dance that the girls in white [perform] at the football game before the whole team starts dancing.”

Throughout the years, the Silver Wings have had captains of multiple ethnicities from white to Hispanic. As the first African-American captain, McCardell said she feels its part of her job to show that there are no limits to what she can do.

“Historically, society has pretty much put [black people] down, but I think it’s up to us to make society recognize that we are just as capable as the next person,” McCardell said. “Rather than letting our race be an excuse as to why we have to think that we are less than the person next to us, let it be a reason for us to achieve more and prove history and society’s opinions wrong.”

Though being the first African-American Silver Wings captain seems like a lot of pressure for McCardell, she uses it as a way to motivate people of color to achieve their goals.

“When I was growing up, I’d always be drawn to somebody who obviously looked like me,” McCardell said. “What I love about being a black captain is that it gives the kids who look like me somebody to look up to, making it seem more accessible [to them]. I feel like [being a black captain] will invite more people into Silver Wings and show them that anything is possible.”

Head coach Anne Bowling said she has seen McCardell improve in her dancing during the four years she has known her.

“She came here as a ballerina and has expanded all of her dance genres [since then],” Bowling said. “She’s a people pleaser, and I think it puts her in an awkward position as captain because sometimes they’re the evil person that has to make the icky decisions, and then people don’t like you for that, and that’s hard for her. She just wants everybody happy and she has a kind heart and a very sweet personality.”

Recently, McCardell auditioned for and got the part of Sebastian in “The Little Mermaid,” which will be performed Jan. 23 – 26 at 7 p.m. Theater director Ramina Mirmortazavi has known McCardell since last year and said her kindness is her best quality.

“Her dancing is obviously something that is so amazing,” Mirmortazavi said. “But more importantly, she’s a really nice person and she works so hard. She comes into rehearsal and she always has a smile on her face; she’s just a joy to be around. To me, it’s easy to want her to be in the show because she’s just so much fun.”

McCardell’s peers describe her as an upbeat, genuine person. By being involved in both theater and Silver Wings, McCardell said she gets stressed, but remains positive and reminds herself of all of her achievements.

“I always say that there is a lot of negative but there is also a lot of positive that you have to remind yourself of,” McCardell said. “Yes, there is a lot of hardships that come with being on Silver Wings and being in the musical at the same time, but I also think about what a privilege it is to be in both of those organizations. I need to make sure that I’m on my game and appreciative of what I have.”