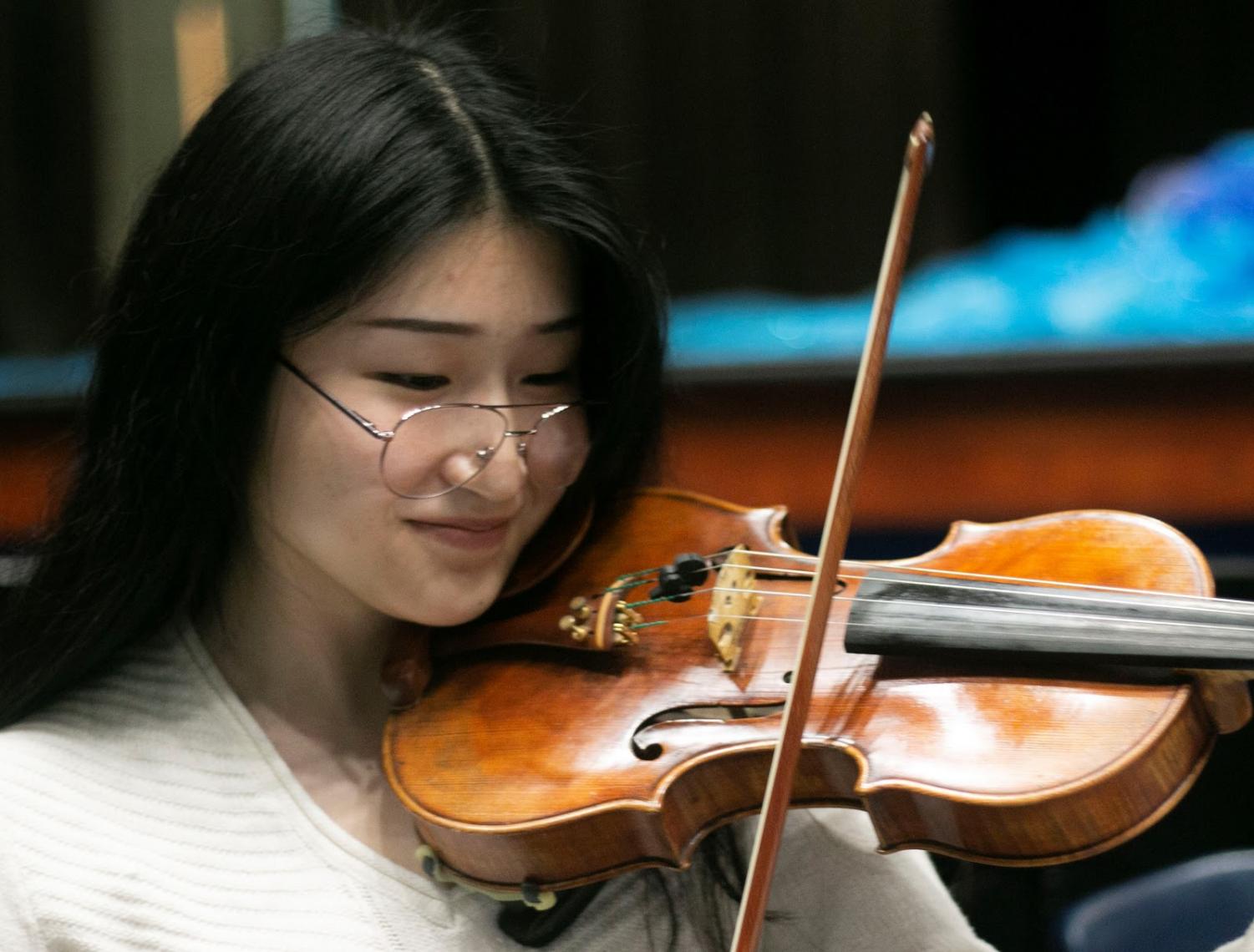 Senior Grace Kang practices her part for the upcoming musical. Although she plans to study visual art in college, she hopes to continue playing violin in future musical performances. “If I have the opportunity to get paid to play in different musical performances, that would be awesome,” Kang said. “I would definitely sign up for that.” (photo by Henry Hays)

Senior Grace Kang practices her part for the upcoming musical. Although she plans to study visual art in college, she hopes to continue playing violin in future musical performances. “If I have the opportunity to get paid to play in different musical performances, that would be awesome,” Kang said. “I would definitely sign up for that.”

The conductor takes his bow and holds up his baton. The full symphony orchestra readies itself to tell the story of a man yearning to be free. The violinist feels the weight of the music — the powerful moment of sharing someone’s story with the world. She thinks to herself, “I’m going to miss this.”

Senior Grace Kang performed Tchaikovsky’s Symphony No. 5 with a Texas Music Educators Association All-State Orchestra her junior year. She has now made an ensemble at All-State for the fourth year in a row, the first musician to do so from the Hebron orchestra program. This year also marks her third to perform in the pit for the school musical, which will take place Jan. 23-26. Despite her accomplishments as a violinist, Kang plans to study visual art in college.

The All-State audition process includes learning two etudes and eight orchestral excerpts, as well as advancing through multiple rounds of auditions. This year, Kang will play with the top orchestra as she is ranked 33 out of the 113 violinists who made All-State Orchestras. Although this was her fourth time auditioning, she felt more pressure this year than the past two because her rank had gone down.

“I tried extra-hard, and I was actually more nervous this year,” Kang said. “I wanted it to count, and I wanted to do well. Going into the audition room I was actually shaking– just like my freshman year.”

Kang has been playing the violin since she was about 8. She and her older sister Nina learned the piano as little kids, but soon quit taking lessons. Shortly after, Kang picked up the violin and Nina began learning flute.

“Nina has really impacted my musical career — she’s given me a lot of advice and insight,” Kang said. “When I have trouble, even though she plays a different instrument and is in a completely different ensemble, she still helps me out and says, ‘That sounds squeaky,’ and ‘That isn’t what it sounds like on the recording.’”

Kang has put in the work to improve her ability: she practiced three hours a day during the summer of her freshman year. Once, after she was dropped off by her parents at her sister’s summer band camp, she practiced for nine hours straight with orchestra director Matthew Cautivar.

“Grace has improved tremendously as a violinist on a technical level,” Cautivar said via email. “This is mostly due to the work she does outside of class. Her class development has been in playing in an ensemble setting – becoming a leader and pulling the group together.”

Nina has watched her little sister grow up and sees how much playing violin has aided the development of her character.

“She grew more patient,” Nina said. “She was able to learn how to persevere through challenges. I remember she still didn’t get the result she wanted in terms of placement, and that just encouraged her to work harder. So she’s learned a lot in terms of perseverance and I think overall rounded out her character.”

This will be Kang’s last year as a member of the Hebron orchestra and her last opportunity to perform in an All-State ensemble.

“I kind of got emotional [auditioning],” Kang said. “I thought about it, and with my future career and the colleges I’m looking at, music isn’t really in the picture. Thinking about having to stop something that I’ve committed ten years to is pretty sad. I tried extra hard this year because I wanted to go out with a bang.”

This is also Kang’s last year to perform in the orchestra pit for the annual school musical. Kang always enjoyed the change of pace the musical brings to performing.

“It’s a lot of responsibility,” Kang said. “I think that’s different than orchestra, because Mr. Cautivar will go over stuff that you mess up on and work on it for like ten minutes. In musical, it’s very fast-paced and you have to learn your music on your own. You have to know the music inside and out.”

Kang also enjoys visual art, namely painting, and hopes to combine her passions in a future career by being an art director for entertainment companies.

“I feel like music plays a huge role in filmmaking because it can set the tone, and there can be motifs throughout the movie and themes for characters,” Kang said. “That’s why I feel like I didn’t waste my time or anything playing violin: because if I do end up doing that in the future, I’ll have some kind of background knowledge about different pieces and things to get inspiration from.”