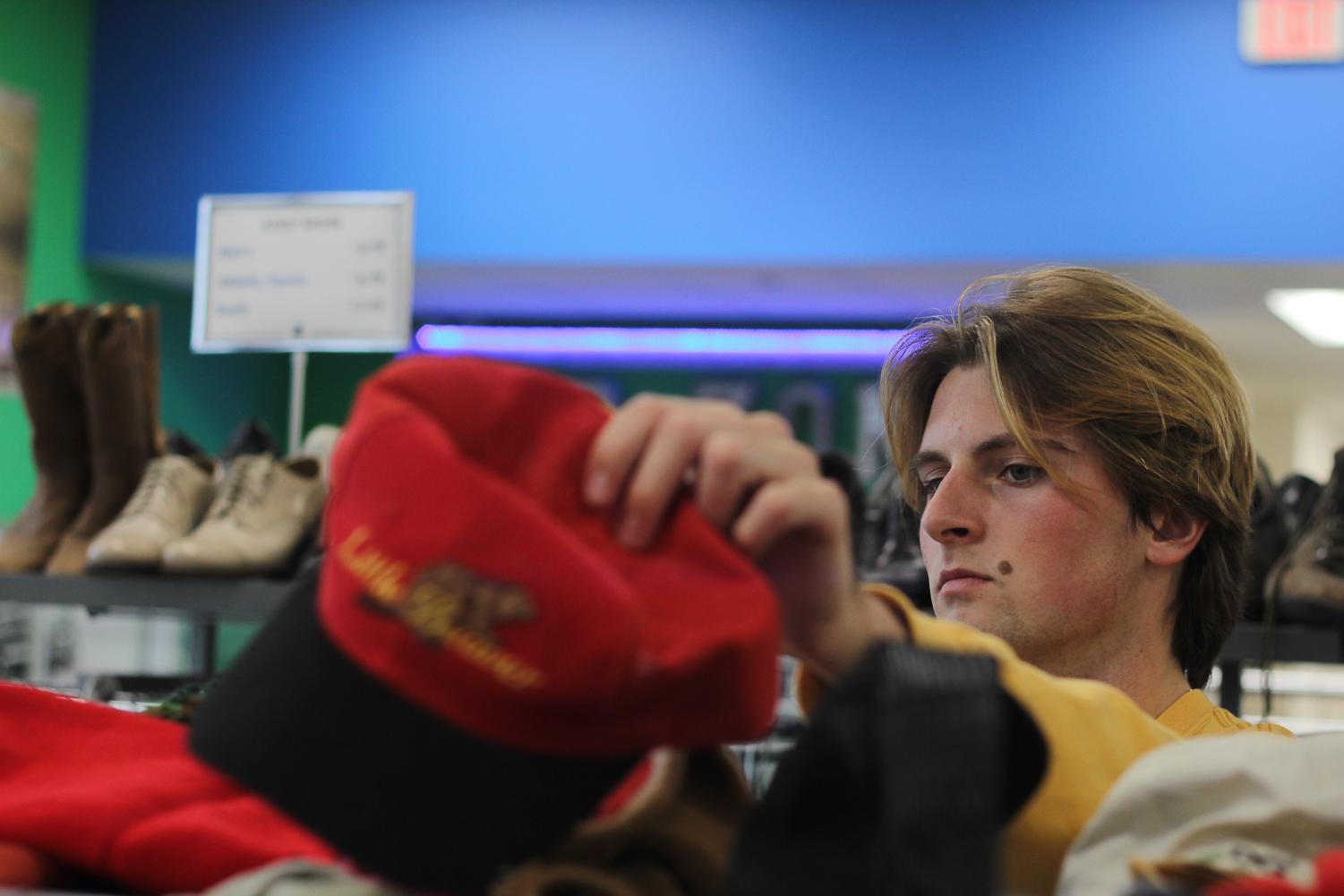 Junior Ethan Pettengill looks through a selection of hats at Goodwill. Pettengill has a clothing line named “personols,” which he creates by refurbishing vintage clothing. (Photo by Malley O'Carroll)

Junior Ethan Pettengill looks through a selection of hats at Goodwill. Pettengill has a clothing line named “personols,” which he creates by refurbishing vintage clothing.

After tennis practice, junior Ethan Pettengill goes home, completes his homework and starts designing his next collection for “personols.” He spends hours at the thrift store looking for the perfect vintage pieces to repurpose into something unique.

Pettengill started his clothing line with the goal of putting his own spin on vintage clothes. In order to prevent his customers from wearing what everyone else is wearing, the self-taught designer is creating one-of-a-kind pieces.

From a young age, Pettengill has had an interest in fashion and wanted to keep up on the latest trends.

“He has always been a fashionable kid from the time he was just a toddler, really,” Pettengill’s mother Karina Pettengill said. “He’s always liked and had an interest in making sure that his clothes are matching and that they are forward-thinking.”

In November, the 17-year-old started his clothing line “personols.” His goal is to help his customers always have the latest style without them having to go to popular stores and wear what everyone else is wearing.

“Whenever [you’re talking] about something you’re going to wear or something you’ll keep and you won’t sell, it’s like your personal collection. I thought I would make something that [was made] for you, for your closet, clothes you’ll buy to keep and hopefully not over-saturate the market,” Pettengill said. “[The style for “personols” is] very me: I don’t like to wear what everyone else is wearing. I try to wear stuff before other people start wearing it.”

Pettengill and his friend, sophomore Michael Harris, often discuss design ideas and marketing techniques. Pettengill and Harris were friends before “personols” was created, and Harris has seen the time and effort that Pettengill puts in.

“I think it shows how much work ethic he’s willing to put into something, and I see him working on it a lot,” Harris said. “I can just tell he’s going to be really successful, and especially at this young age, making a company like that just shows what he’s going to do whenever he gets older.”

Pettengill is a self-taught designer — he learned from trial and error as well as online tutorials. He uses social media to advertise and to learn from other designers.

“I just kind of found what was best for me,” Pettengill said. “I see other people posting on their social media [about their] thrift finds, and so I kind of know what to look for now, but it was mostly just trial and error and you just got to keep going back because there’s always something to find.”

Although his mother was slightly skeptical when Pettengill first wanted to start the company she has always supported him and hopes he continues his business in the future. She has seen him grow and learn in many ways since he’s started his journey as a business owner.

“My thought is he’s probably going to continue it through college, and it could blossom into something more in the fashion industry,” Karina said. “I think it’s creative, and it might get some eyes and attention from folks in the fashion industry. I’ve seen him grow from a business-minded standpoint, but I’ve also seen him [improve his] social networking and ability to reach out to the people and actually garner support, which I know can be easier said than done, but I think that in the space to get some of the followers and the customers that he has, I think it is pretty impressive.”

Pettengill has launched two collections so far and his third will be released soon. Creating “personols” has taught him valuable lessons, and he plans to use his profits to benefit his future.

“I was able to fund a car for myself that I’ll give to my sister when she turns 16, and hopefully help pay for part of college,” Pettengill said. “[Through this experience I’ve learned that] I don’t have to work for someone else to do something that I love.”