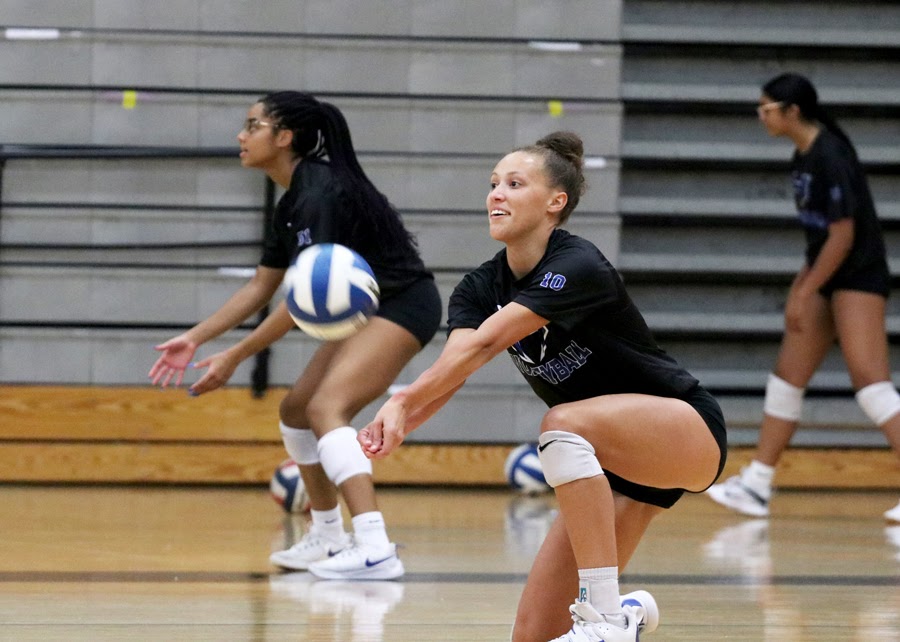 Junior Harmony Sample practices passing to her teammate at practice on Oct. 7. Sample has been playing volleyball since she was 11. “I was originally a dancer, but my sister was a volleyball player so I was always at her tournaments,” Sample said. “When I decided to stop dancing, I decided to play volleyball.” (Photo by Grace Edgeworth)

Junior Harmony Sample practices passing to her teammate at practice on Oct. 7. Sample has been playing volleyball since she was 11. “I was originally a dancer, but my sister was a volleyball player so I was always at her tournaments,” Sample said. “When I decided to stop dancing, I decided to play volleyball.”

Junior Harmony Sample patiently waits in the car to arrive at her destination. Her eyes light up when she sees the campus of the University of Notre Dame. She walks around the grounds with a feeling of excitement as her eyes scan the beautiful scenery, and she feels a sense of peace.

After some deliberation, Sample verbally committed to the University of Notre Dame in August. She will be attending the school with a four year scholarship for volleyball.

Head volleyball coach Karin Keeney has coached Sample since her freshman year. She said Sample has grown and advanced as a player throughout the years.

“You cannot play a perfect game no matter what athlete you are, but she came out of the dance world where she was taught all about perfection,” Keeney said. “So, I think that was a real struggle for her at first, and now it is really fun watching her reel in some accolades and get some notoriety because she is a tremendous athlete. “

One of Sample’s closest friends, junior Samantha Stahl, has been playing volleyball with her since she was 12 years old. She said Sample has grown as a person and as a leader on the court.

“Seeing how much effort she puts into school and volleyball is crazy,” Stahl said. “Since freshman year she’s been on varsity, which is something she definitely deserved. She’s grown just in these three years; she communicates better and she is such a huge leader to all of us.”

Keeney said the balance of sports and academics makes Notre Dame a good match for Sample.

“The volleyball program has been taking a step up and I think the tradition of the school and the academics being so strong, the school is a perfect fit for Harmony,” Keeney said. “I am not sure where she is going to go with her degree, but I know whatever she decides, she is going to do really well.”

Sample said her goal is to win a championship with her team. After graduating from the University of Notre Dame, Sample hopes to play volleyball professionally.

“The main goal is always to win a national championship there,” Sample said. “It would be amazing to be the first group to win. My individual goals would be to develop the skill set to be able to play professionally after college. I also just want to be able to improve in abilities and push myself to be as successful as I can be.”