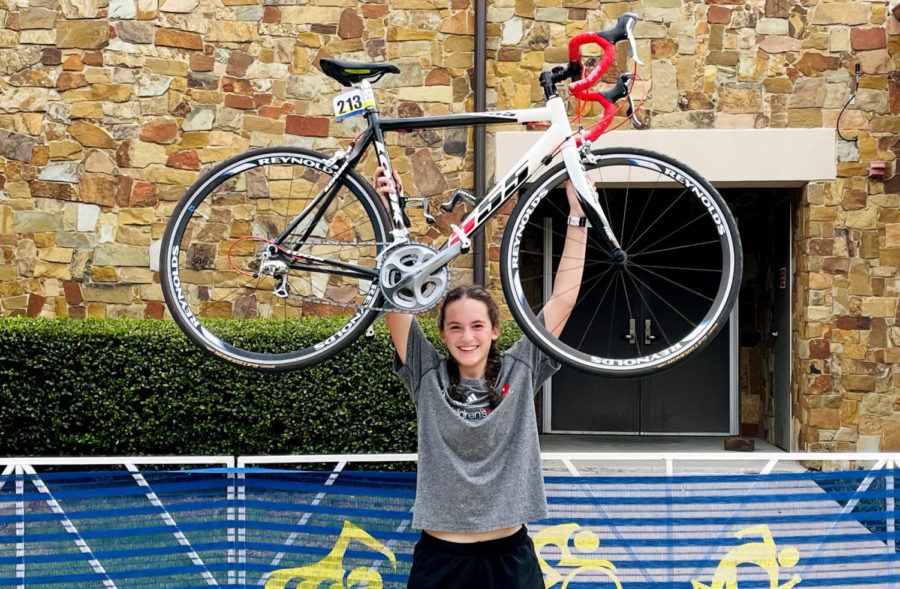 Senior Weslyn Brown’s heart pounds in her ears. Sweat drips into her eyes, but even through her obstructed view, she can see the arch marking the completion of her triathlon. She kicks. The route is downhill and she is flying. The arch grows larger. Weslyn makes the final push and, with one foot in front of the other, becomes a triathlete.

On Aug. 29, Weslyn placed 68 out of 247 participants in the Playtri McKinney Triathlon which consisted of a 300 meter swim, 12 mile bike ride and 3.1 mile run. She reached her “A-goal” of completing the 15.3-mile race in under 1 hour and 20 minutes; however, it was only after several months of training that Weslyn was able to make her goal a reality.

“I think it was December of last year [when] I had the idea,” Weslyn said. “I [thought], ‘You know what, I want to do a triathlon.’ It was just some random idea, and at that time, I wasn’t sure if it was actually going to happen. Then I started to look into it and all the things I needed, and it seemed like something I could do. So I [thought], ‘I’m just going to go for it and see what happens.’”

Weslyn’s parents encouraged her to do a 5K and 10K first, since a triathlon is a sizable commitment. She trained for and participated in a 5K in January with her dad, Jim Brown.

“There’s a lot that goes into [triathlon] equipment itself, so it’s a commitment to get involved,” Jim said. “A lot of the triathlon is just figuring out how you get the equipment [and] how you sign up. The next part is how you train [and] where you train. There’s a lot more to it than people think.”

Weslyn sought the guidance of her former sports performance coach for instruction on cycling, and she took on a job as a lifeguard so she could utilize a lane pool. Weslyn played 14 years of school and club soccer, so even though her soccer career has come to an end, it has made her an adept runner.

Though participants’ ages varied, Weslyn was one of only four girls under the age of 18 present. Of the 247 competitors, 79 were women, but Weslyn wasn’t surprised by the demographics of the race. Weslyn’s mom, Beckye Brown, said her daughter never seemed overwhelmed during the triathlon.

“[Weslyn] inspires me in the way that she’s always looking for the next goal,” Beckye said. “She’s always willing to take on whatever challenges come with that. She’s not intimidated by life. I think this triathlon is a perfect example of that.”

Weslyn set her training schedule and primarily completed workouts alone. She documented her journey to the finish line for herself and her close friends on an Instagram account dedicated to her training.

Having discovered her love of triathlons, Weslyn signed up for a triathlon with a slightly longer distance. Her next race will be on Oct. 3, and she has also looked into various college club triathlon teams.

“[On Sunday,] I found out [that] I like triathlons,” Weslyn said. “I think I’ll stick with it. Once I crossed the finish line, all of it was so rewarding that I’d do it again in a heartbeat.”