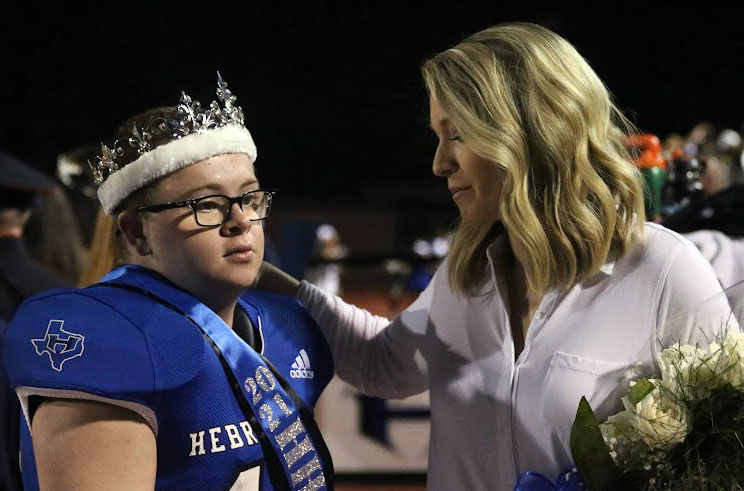 Senior Brady Vaughn won Homecoming king on Oct. 22. He looks to the crowd as his sister stands to his side and supports him. (Malley O'Carroll)

Senior Brady Vaughn won Homecoming king on Oct. 22. He looks to the crowd as his sister stands to his side and supports him.

Senior Brady Vaughn, who was born with Down syndrome, crowned Homecoming king

The crowd chants as senior football player Brady Vaughn raises his arms up and down to get the crowd excited during Friday pep rallies. As Brady smiles at the crowd and jumps up and down, his friends in football surround him and cheer with him.

Brady was born with Down syndrome, but that didn’t stop him from becoming a part of the school’s football team and winning Homecoming king on Oct. 22. He was constantly supported by the Hebron community as a child because his father, Bobby Vaughn, began coaching at Hebron in 2001. Academic life skills teacher Julia Gambell has worked with Brady since he was in elementary school and said she enjoys how supportive the community is of Brady.

“Brady has been around Hebron forever, so everybody knows him,” Gambell said. “I have seen how the football team has treated him as well — they treat him like one of the boys, and when I see him in the hallways, he always has a big group of people around him. A lot of people know [him] and he’s very well loved.”

Having always been a fan of football and attending games at Hebron as a child, Brady has enjoyed watching and playing football not only for the potential thrill of scoring a game-winning touchdown, but because of the people he meets. Brady said he loves cheering on his teammates before the football games and motivating them to keep going during the games.

“The boys [from football] work really hard and try their best, [and I] enjoy being a part of the Hebron Hawks,” Brady said. “When they say ‘Brady, Brady, Brady,’ [during the game day pep rallies,] I feel so happy.”

Bobby says Brady’s ambitions after high school are to either attend college or engage in “Focus on the Future,” a program that teaches people life skills. Working at Taco Bell for six weeks and being a part of the football team, Brady isn’t one to stay at home a lot, Bobby said.

“I don’t think he’ll want to sit at home with two old people because he wants to be active,” Bobby said. “He hates sitting down and being quiet. He always has to have people around him and he really wants to be independent in the future.”

Brady’s ability to get along with anyone is something that his teacher, Dominique Coleman, admires. She said he considers everyone to be a friend no matter their background, and his outgoing and friendly personality is something she enjoys.

“Brady is a huge human fan,” Coleman said. “What’s so awesome about him is that he doesn’t care if you’re a water boy or the quarterback on the football team, because he cheers you on regardless. I believe that he just loves to hear the crowd get loud.”

When Brady won Homecoming king, Bobby said he was ecstatic for him and grateful for the entire school community. He said Brady’s crown isn’t just a crown that he won because he became Homecoming king, but one he won because of the support he received and the numerous friends he made while a student at Hebron. Bobby said that high school isn’t just a memory for Brady: it is a part of his identity and has shaped him to become who he is now.

“He loves everybody and he doesn’t have a mean bone in his body,” Bobby said. “He doesn’t even have an enemy and there’s [nobody] that he doesn’t like  — he thinks everyone is a friend. He’s a great kid and [I would describe Brady as] what I wish the world was.”