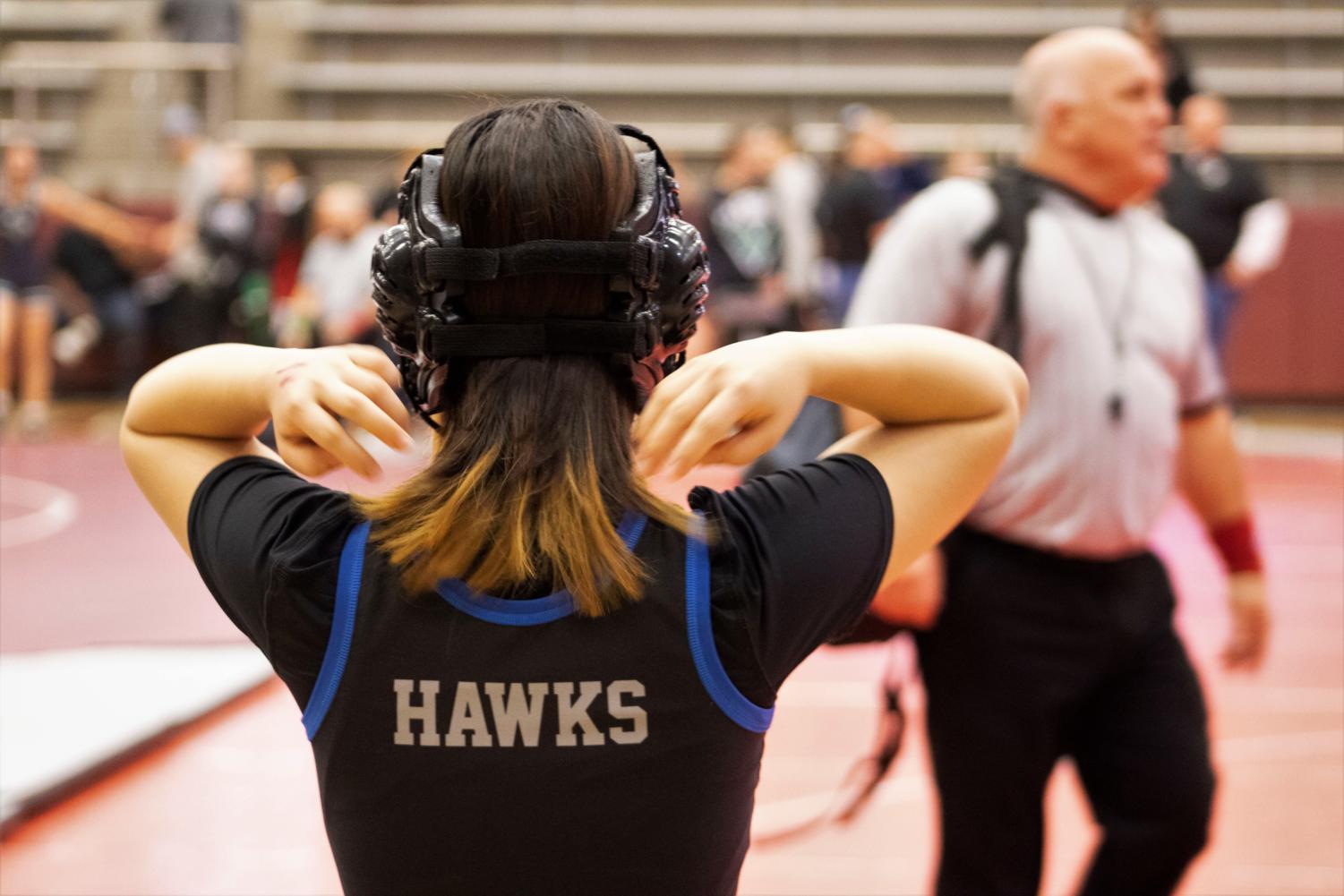 Junior Gloria Lee prepares for a district match at the Lewisville High School arena on Feb.5.

Pinning down a new passion

The whistle screeches. She stands firmly on the mat, and the yells of her teammates echo in her ears. Her eyes focus on her opponent’s hips, watching for signs of an attack. It’s her time to strike.

“I decided to try new things over summer break [and] it turned out I actually liked [competing in] close contact sports,” Lee said. “Then I found out there was a girls wrestling group [at school], and even had some friends that were going to join, so [that also] inspired me to join [wrestling].”

The decision to join wrestling took orchestra class out of her schedule. But Lee was ready to move on since playing the violin had long been a part of her life. She started playing in first grade while living in Korea and picked it back up in the U.S. at the start of middle school through her junior year.

“I chose to [play the violin years ago], and my parents liked it because they were a part of the music industry,” Lee said. “My dad was an opera director and my mom was an opera singer.”

Junior Elena Hong met Lee in orchestra in the fall of 2021. Hong said Lee was scary when they first met, but she eventually found out that Lee has the kindest heart and is really funny.

“I was surprised that [Lee joined wrestling] because junior year seems a bit late to join [a sport], but I’m glad that she’s doing something that she really enjoys,” Hong said. “So I hope the best for her.”

Joining weeks into the wrestling season, Lee was one of only three female wrestlers. She said the other two girls, juniors Stephanie Negrete and Miranda Solano, trained and treated her like family. At the time, senior wrestling captain Spencer Griffin had a few weeks left to prepare the team for district matches.

“[Lee] likes to mess around, be funny and bring humor [to wrestling,]” Griffin said. “She’s [also] trying [her best] to learn with the time she has left of the season — [Lee] joined so late that she really doesn’t have a fair start with everybody else. Being a junior is hard because she only has one year left to get caught up.”

“[Lee’s] willingness to learn and work has been positive,” Rozanski said. “That’s all you can ask [of a wrestler]: effort and being coachable. I’m sure [her future in wrestling] will be positive if she keeps working hard, learning and training.”

So far, Lee has competed in five matches, three of which took place at the district tournament on Feb. 5. All of them resulted in losses, and she did not advance to the regional championships.

“I wasn’t sad about my [first few wrestling losses] because I was going up against [more experienced people,]” Lee said. “[I instead] thanked my opponents and was honored to have them as my first [competitors.]”

Since the wrestling season has ended for Lee, she is looking forward to next year. For the upcoming summer, she plans to return to the MMA gym for more training, and by the end of next year, Lee hopes to inspire girls and others to join wrestling.

“If you’re joining [wrestling], put your all into it,” Lee said. “I definitely believe someone should leave whatever they’ve been doing [for a while] in their life to try something new — that’s what life is about. You’ve got to try something new, step outside of your comfort zone, see if you like it and it might help you, [like how] wrestling got me to [be a lot] more athletic and somehow keeps me happy.”