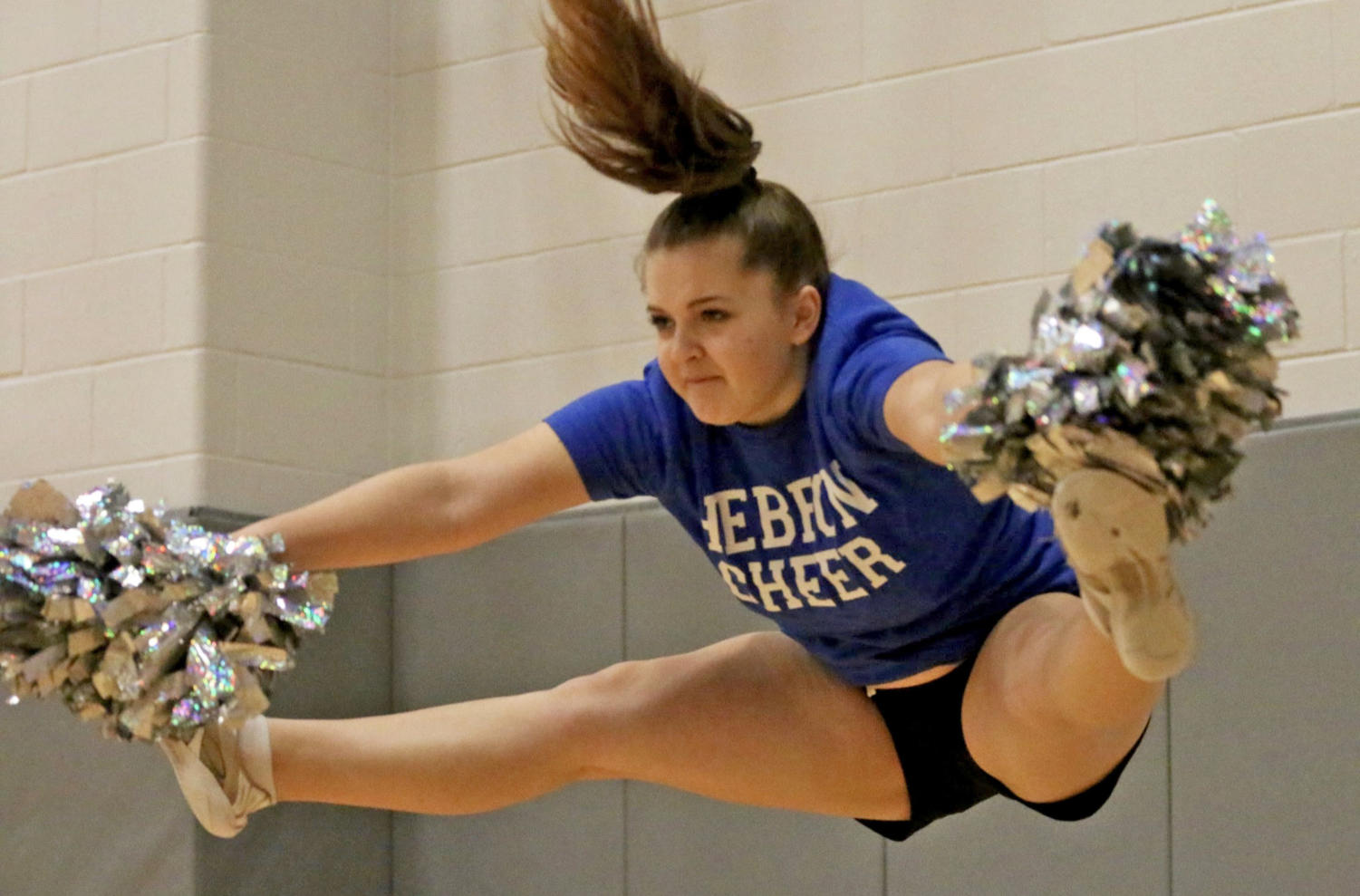 Freshman Claire Gross does a straddle jump during warm-up on March 29. Claire has been doing cheer for two years and plans on staying in Hebron Cheer all four years of high school. (Krista Fleming)

Freshman Claire Gross does a straddle jump during warm-up on March 29. Claire has been doing cheer for two years and plans on staying in Hebron Cheer all four years of high school.

Tumbling to the Top

As soon as the routine music finishes playing, freshman Claire Gross can finally breathe. Her team has done their best, and all that’s left to do is let the judges decide their ranking. Confetti rained down as music began to play.

The judges had hit the golden buzzer.

Without seeing the rest of the teams, the judges gave Claire’s team first place at a national competition.

Claire, a two time All-Star National Champion cheerleader, is now preparing for her next competition on April 3 and an international competition near the end of the month.

“It takes a lot of dedication to do this sport, especially at [Spirit of Texas],” All-Star coach Brandee Morris said. “Our gym is one of the best All-Star cheerleading gyms in the world and we require a high level of expectation and commitment. Claire is one of those people that will be present when you need her to [be] and always does her best.”

Along with being on an All-Star and school cheer team, Claire passed an on-level junior level Algebra II class as one of the top students the teacher taught. She completed Geometry as a Virtual Learning Academy course the summer before, which set her on a more academically advanced path.

“[Algebra II] was really intimidating,” Claire said. “I didn’t talk to anyone for the first few weeks. Once I got my grades back and they were all high A’s, it made me feel better. From there, I managed to make a few friends. I even ended the year with a 96 and [got] a 100 on the final.”

Claire’s parents were the ones who pushed her to take the junior level class, and she said they have been nothing but supportive when it comes to school and cheer.

“We just wanted to be able to help her as much as we could over the summer when she took her geometry class without all the external activities that would happen during the year,” Claire’s mother Jennifer Gross said. “It seemed to have paid off. She did very well then and did just as well last semester.”

On average, Claire cheers 16 hours a week, along with an hour of homework each night. She cheers daily with the school team and at least three days a week with the All-Star team.

“It’s a lot of late nights, reading in the car or my parents making sure I have all my work done, but it’ll be worth it,” Claire said. “I want to do college cheer and go into the medical field to be a pediatric nurse.”

The All-Star team is preparing to go to one last competition before competing internationally in Florida at the end of April.

“Claire is a gem,” Morris said. “It’s so great to have someone like her. She has a lot of talent. When she isn’t the best in one area, she’s fine with that. She lets others shine but she works hard to improve in every area she can. I have no doubt she’ll do well in this competition too.”