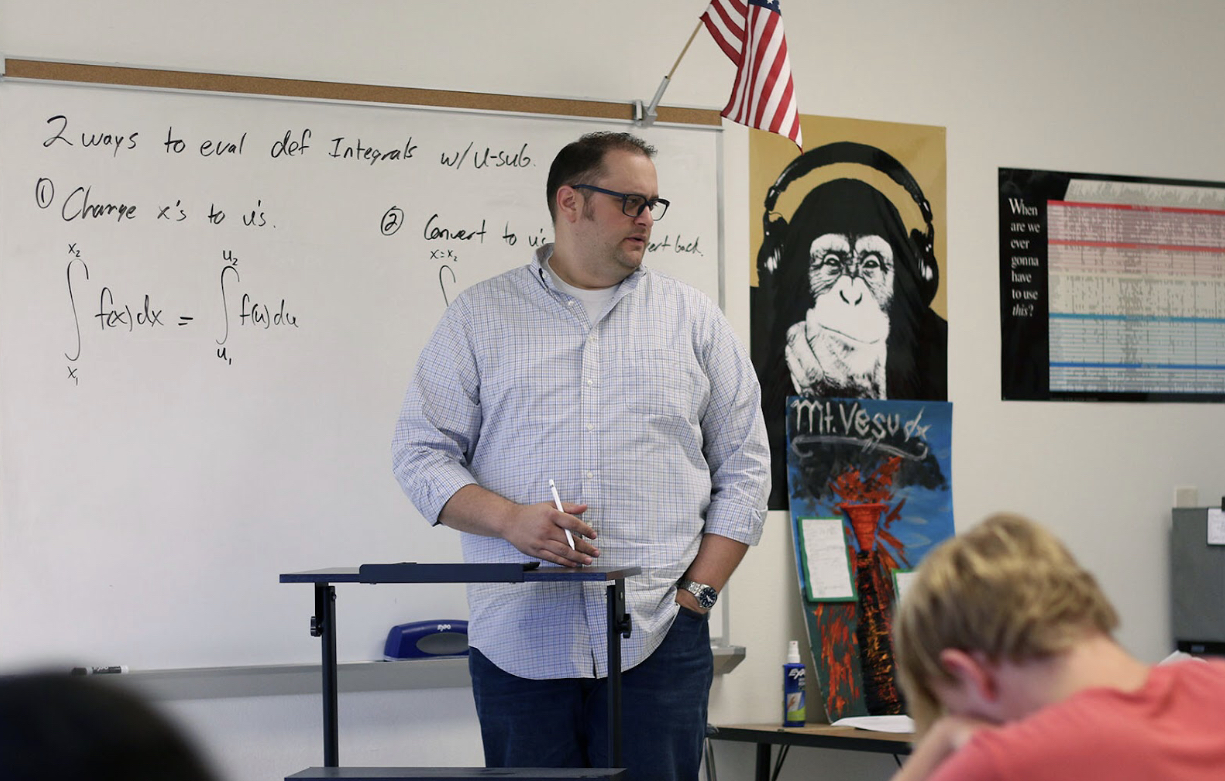 Being able to help and serve people is what AP calculus AB teacher Bradley Barry says he loves to do and why he does the many things he pursues in and outside of school.

“[I was a] broke college student [and] I needed money, so I got a job tutoring at this school,” Barry said. “I tutored this lady who was probably 70. She decided she wanted to [finish] school, but she had to take three math classes before she could take anything that would even give her credit towards college. I tutored her for two years and she came to me on the day of when she finally finished [her last required] math class [before] she could finally graduate. She came and she celebrated, and we even baked cookies. After that, I was pretty much hooked onto the teaching route and always wanted to teach calculus because it’s the best course ever.”

Alongside teaching, Barry has three other jobs. Barry’s second job is as a pastor at Legacy church in Lewisville, which he considers his main job. Barry moved to the metroplex from Coline, TX six years ago to start his church with his wife.

“Our fifth [church] anniversary [is] this June, and it’s been exciting,” Barry said. “It’s been an adventure for sure. We started the church from Bible studies at homes, and then grew it to have individual services. Now we have a place that we rent from across the street from Lewisville High School.”

Barry’s third job is owning a small business fixing, repairing and replacing window screens with his wife. He puts solar screens on windows to block out sunlight or bug screens to block bugs.

“[I started the window business due to] needing money,” Barry said. “My wife is a counselor, and we have three girls. We wanted her to stay home with them and living in the metroplex on a teacher’s salary is kind of hard, so we started up the business to bridge the [financial] gap while she was raising the kids at home. [Since] the kids are getting [to] school age, we are actually closing our screen business since she’s going back to work.”

“The opportunity [to buy a snow cone trailer] came up for [me] during the COVID-19 lockdown and I thought ‘yeah’ because I have always wanted to [own a snow cone stand],” Barry said. “The idea is that we can use the snowcone stand for the church’s outreach events, or if we have a teenager that wants to go to summer camp, [they] would work the snow cone [stand] and that [could] cover [their] trip. We thought it would be a neat way to reach out, give back to the community and show up at western days or Fourth of July parades and just give out free snow cones.”

Although being a teacher allows Barry to have multiple benefits, he said that in the future he wants to pursue pastoring as a full-time job and run his snow cone stand on the side.

“The man is everything: he’s very involved with students and I live in the same area as he does, so I see him back [in] the community as well,” math department chair Cameron Casalini said. “[Barry] tries to really serve everyone. He’s hilarious, he’s very dedicated to what he does here at school and he’s a great teacher.”

Barry has been teaching honors pre-calculus and AP calculus AB for six years. Junior Riya Patel was a student in Barry’s AP calculus class last semester and says she enjoys how Barry teaches.

“[Mr. Barry] is a very vibey and lively person,” Patel said. “[He] taught really well and prepared [me] for [my future] AP exam and made the class interactive and fun by telling a bunch of stories about himself.”

Although having many jobs is a lot for Barry, he said that multiple things allow him to keep going.

“Caffeine, Jesus and my family [keep me going,]” Barry said. “I [also] love having relationships with people. One of the reasons I changed my major in school is because I hated the idea of sitting behind a desk. I love seeing people learn and seeing the lightbulb go on in their head, whether it’s teaching them a Bible study or calculus. That is the coolest feeling: being able to see people’s progress and to know you played a part in it no matter how big or small it was.”