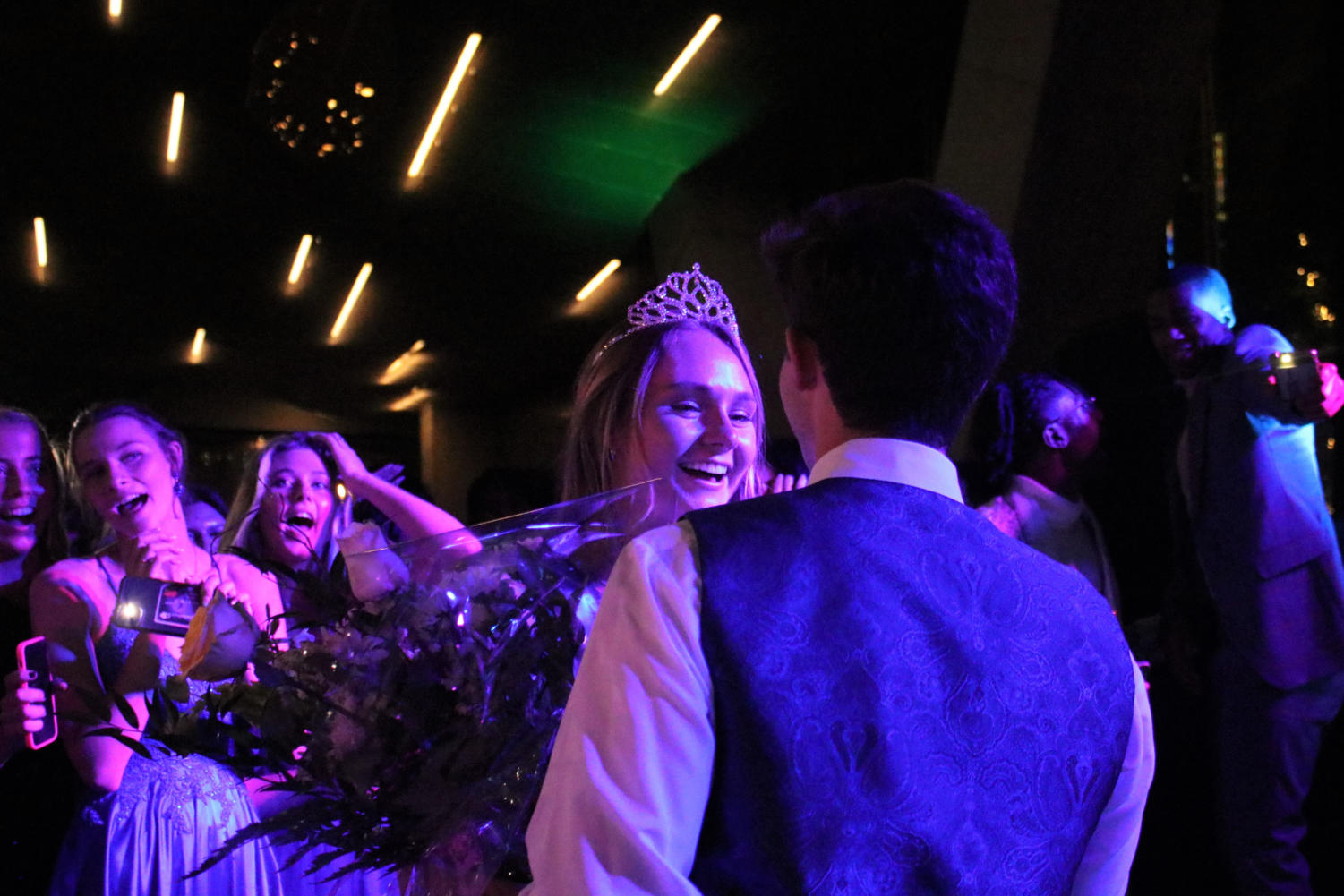 Senior Parker Coe dances with her friend after being named prom queen. Prom was held April 23 from 8 p.m. to 12 a.m. at the Perot Museum of Nature and Science. (Henry Pham)

Senior Parker Coe dances with her friend after being named prom queen. Prom was held April 23 from 8 p.m. to 12 a.m. at the Perot Museum of Nature and Science.

Prom was held April 23 from 8 p.m. to 12 a.m. at the Perot Museum of Nature and Science, and seniors Fred Ware and Parker Coe were announced prom king and queen. “The Hawk Eye” reached out to them to ask their thoughts on winning these titles.

Were you surprised you won?

Fred Ware: “It was cool at first when I [was nominated and] found out that I had a chance of winning. I was really excited. I felt really nice when I won.”

Parker Coe: “I was very surprised. It was super cool because I did not expect it.”

What were your initial thoughts?

Ware: “I was just really happy knowing [that] I had the respect of my peers and other classmates. It felt nice knowing that there were people around the school who thought of me when the voting was happening.”

Coe: “[I] just [thought] ‘Wait, what? Are you serious, is it really me?’ Then going up on stage and seeing everyone cheering was super fun.”

What’s something you think people would be surprised to learn about you?

Coe: “I am kind of an open book so that’s a hard one. I [would say] everyone knows everything about me. I don’t have a lot of secrets because I am just really out there.”

What was the significance of this prom for you?

Ware: “The significance of this prom for me was definitely winning king. Also, having prom at the Perot Museum was so much fun. It was a great venue.”

Coe: “The significance of this prom would probably be going back to normal after [COVID-19]. Last year was different and we didn’t have a real prom, so this was really memorable for me.”

What was your most memorable moment of the night beside the crowning?

Ware: “Seeing all my friends in their cool outfits was a memorable moment. Seeing everyone dressed up and just having fun at prom was the best part.”

Coe: “The best part of the night was dancing around with my friends and getting to spend time with them. Spending my last prom with them and making memories for a lifetime was great.”

How do you think your freshman self would react knowing you are prom king or queen?

Ware: “My freshman self would probably be surprised [because] he was a little bit dorkier. He was a goofy kid, and I have grown a lot [since then], so he would be happy.”

Coe: “I don’t think my freshman self would have believed that I won prom queen. This whole experience has been so fun, but it’s something I never expected.”