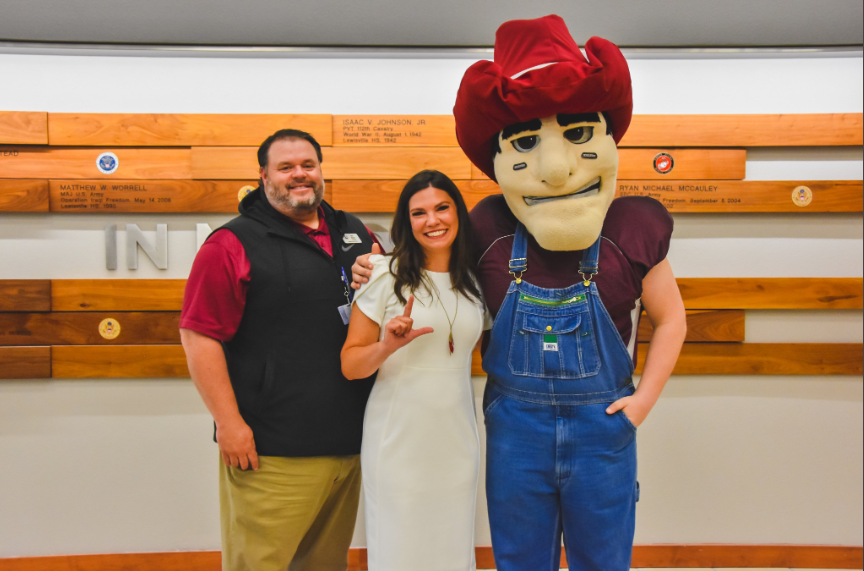 Assistant principal Rachel Flanders has carried a lifelong dream since she was a student herself in LISD: to give back to her community. Now, after being announced as the new principal at Lewisville High School Harmon on May 2, Flanders said she is ecstatic for what’s to come.

Growing up in LISD in a family familiar with struggle, Flanders knew she wanted to make an impact for the better. She applied for an assistant principal position at Harmon, then switched to the same position at Hebron two years ago.

“I wanted to join Hebron because I had heard about the amazing things that were going on at the campus,” Flanders said. “Hebron was leading the district in academic scores and clubs.”

In the 2020-21 school year, former assistant principal Linda Cragin was promoted to principal of Hedrick Middle School during the fall semester. Finding a replacement in the middle of the year was difficult, according to principal Amy Boughton. However, Flanders proved herself beyond worthy by being detail-oriented, hardworking and relational, Boughton said.

“She was able to come in the middle of a school year and make relationships with the district easily,” Boughton said. “I gave her a list of duties that she had to pick up and hit the ground running on, and she was able to do it.”

Boughton has conflicting emotions regarding Flanders’ departure. Simplified, she said it is a bittersweet farewell but demonstrates her capabilities to be a leader in the community.

“I’m sad because I feel like she was gaining a lot of ground and becoming a fixture in our school,” Boughton said. “I’m sad for Hebron that we are losing her, but I’m really happy for her because I know it’s a lifelong dream of hers to become principal of Harmon.”

Harmon’s bookkeeper Terri Cott said she is thrilled to have Flanders back in a leadership position. The current principal resigned due to personal reasons, which opened up the long-awaited position for Flanders.

“We are thrilled to have her come back,” Cott said. “Thrilled isn’t even a word to describe how we feel about her coming back. Flanders is just one of those very calming souls [where] there can be chaos all around her, and she’s just going to handle things beautifully. She has such a wonderful, infectious smile and [is] a presence to be around.”

As the school year comes to a close, Flanders reflects on her favorite Hebron memory, which was meeting with the female-led organization Hebron GirlUp to provide free menstrual products for students. Inspired by their determination for action, Flanders said she will miss the outspoken student body of Hebron the most.

“My favorite part about Hebron is the people,” Flanders said. “I am blown away by the passion and courage our students have here. Having students who aren’t afraid to stand up for what they believe in is so cool, and that’s why I’m going to miss the people.”