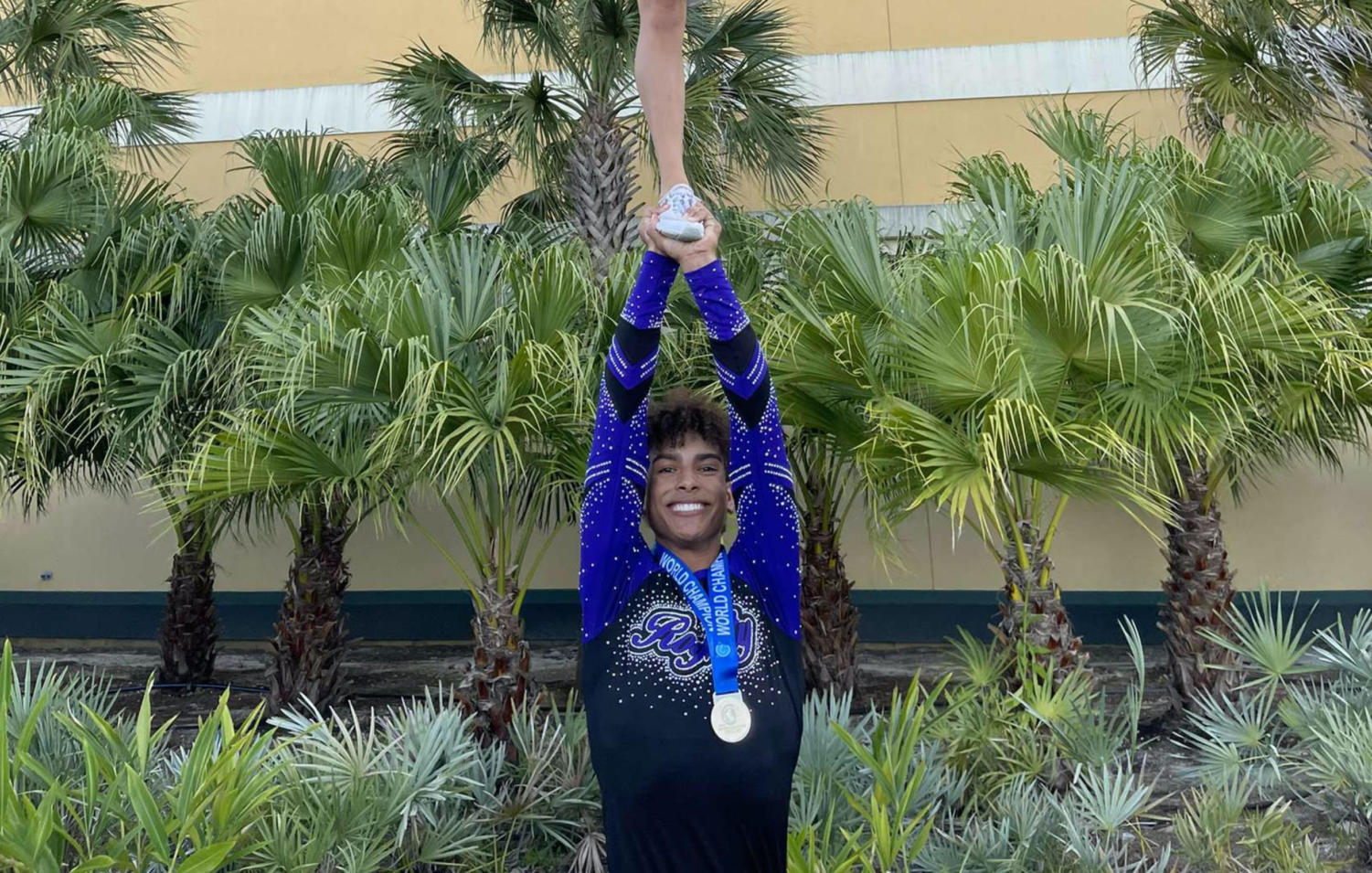 Junior Landon Hill lifts a cheerleader up and poses for a photo after winning world championships on April 23-24. (Landon Hill)

Junior Landon Hill lifts a cheerleader up and poses for a photo after winning world championships on April 23-24.

Junior Landon Hill started off as a gymnast. He wasn’t yet aware of his love for cheer until his coach, who was a cheerleader, encouraged him to start cheer.

Hill started cheering competitively when he was 9 years old. He is currently a part of the Spirit of Texas Royalty in Coppell as well as the school’s cheer team. Hill competed in the U.S. All Star Federation (USASF) world championships on April 23-24, and his team won the 2022 world championship title.

[Winning world championships] felt like everything that I had worked for since I was 9 years old when I started [cheer],” Hill said. “It paid off because there’s [been] a lot of losing and a lot of winning in my cheer career, but at that moment, nothing else really mattered, so it felt really good.”

“There [are] definitely moments [where] I wanted to give up or stop [cheering] because it’s so time-consuming,” Hill said. “A lot of times I had to miss out on stuff with [my] friends because I had competitions and practice. Balancing [cheer, my social life and school] is definitely hectic. I missed out on a lot, [and] it’s definitely draining at points trying to keep up with everything. But I wouldn’t have it any other way.”

Junior Kamille Tapley, Hill’s close friend, said she is proud of Hill and his achievements. Tapley said Hill is determined in achieving his goals.

“[Hill is] very hardworking and like a leader on his [cheer] team, so he always [gets] the job done,” Tapley said. “He was never really the one to make problems, but he always held other people accountable and just made sure everything was OK. I have no idea how he is able to balance [cheer, school and his social life], but I know that when it comes down to his priorities, he will find a way to get everything done.”

“I probably won’t cheer competitively after high school just because I want to [have] a ‘real’ college experience,” Hill said. “I coach a junior level team at my gym right now, but in the future I don’t know if I want to coach or not. It just depends on how it works out with the whole dentist thing.”

JV cheer coach Sarah Adams said Hill knows when to get serious, which is what makes him a leader on the school’s cheer team.

“Landon is the definition of confidence,”Adams said. “He is an insanely talented cheerleader, for both school and all-star, and [he is] an amazing leader for everyone around him. His leadership and presence on the floor [are] amazing to watch, and it’s very important that his actions show what it means to be a Hebron cheerleader.”

Since cheer is a female-dominated sport, Hill said it is weird how people react when he tells other people that he is a cheerleader. So, although cheer can be hard for him due to time constrainments and other hectic parts of cheer, Hill said he enjoys the thrill of cheer.

“At first, it was strange for people when I told them I was a cheerleader,” Hill said. “However, when they saw me perform, they were often impressed [and] forget the stigma when they see that we’re just normal guys who are able to do some pretty impressive skills. [Cheer can be a] lot of work and dedication, but obviously when you win something as big as the [USASF] world championships, [it] all pays off and you don’t regret the hard work or events missed because it’s all worth it in the end.”