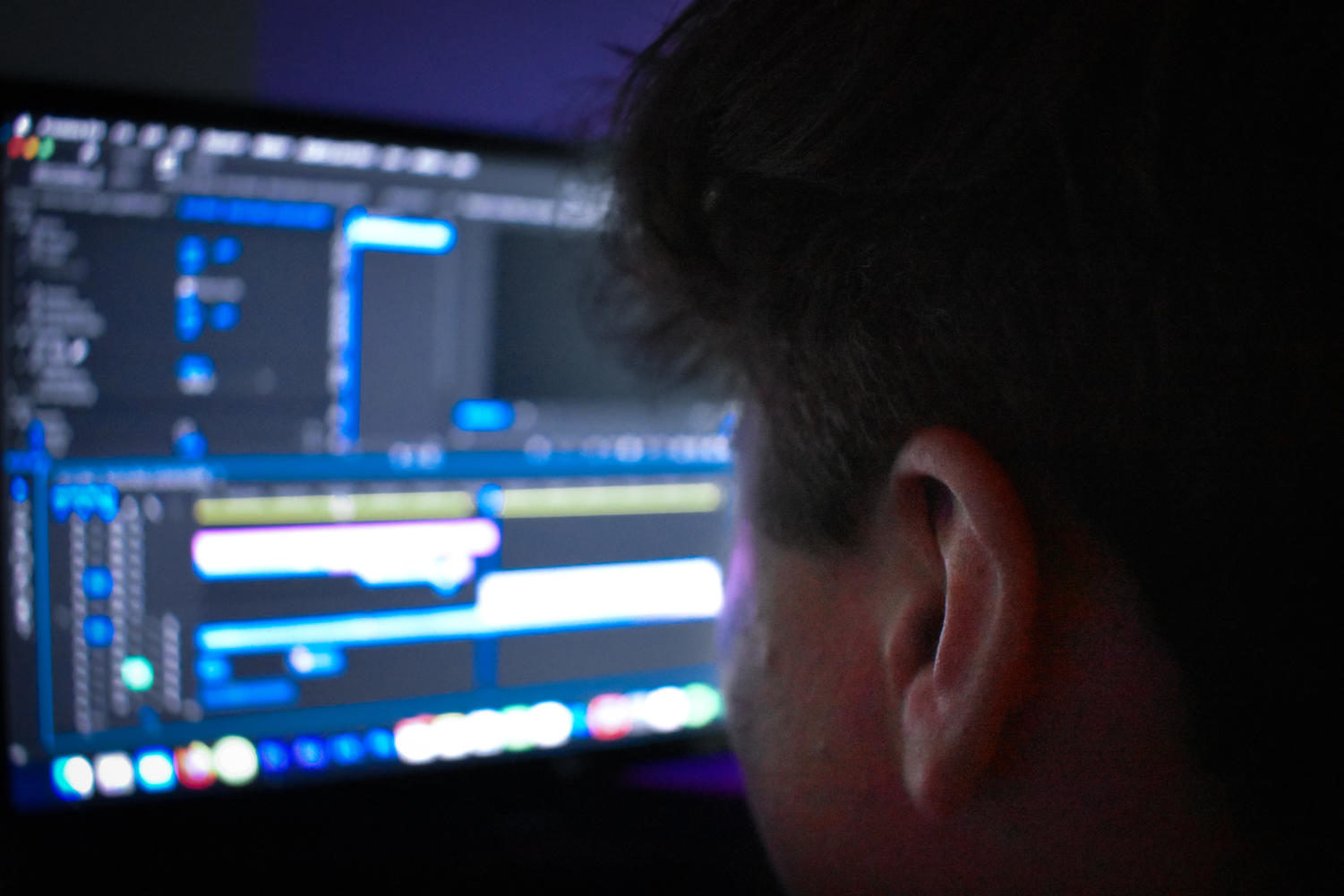 The hours pass quickly as senior Jack Rossi edits a video for the varsity football team. Despite a full schedule, Rossi finds time to do it all. Turning a hobby into a source of income with a company he founded six years ago, Rossi said he has found his calling.

Rossi’s passion for videography and editing was sparked in the third grade when he made a slideshow of family pictures with music to show at a gathering. Ever since, Rossi has cultivated his skills. He started a freelance digital media production business — Rossi Films — in sixth grade, which he was featured for in an episode of Hawk TV in May 2021.

“I’ve learned so much since day one of creating Rossi Films,” Rossi said. “I started out on iMovie on my iPhone, and then gradually dove into the art of video editing. I found out that there is a whole world that I didn’t even know existed, and I fell in love with that.”

Rossi is currently employed under contract by multiple companies. Employers find him on the app LinkedIn, where he posts his portfolio and connects with people who hire him to create content for them.

“I’m now creating content for companies to use to boost their platforms, engagement and their overall brand online,” Rossi said. “That, in turn, will boost their profit margin.”

Rossi is also a first-year member of The Talon yearbook staff, where he photographs school events and designs pages that will go in the yearbook in the spring. He joined the publication to learn more about design and to expand his experience with programs like Adobe InDesign.

“I started looking into yearbook and I [loved] the way that they designed [things],” Rossi said. “I intentionally left something in [the] classroom [because] I wanted to see how [yearbook] works. Luckily, [the yearbook class was] in the middle of a pitch meeting, and I got to watch a little bit of it. I wanted to be a part of that so bad.”

Similar to his feeling of belonging in the yearbook class, Rossi found a home as an intern at Minerva Consulting in January. Minerva is a company based in Richardson, TX that specializes in media production and marketing. Austin Hines, the multimedia director at Minerva, has worked closely with Rossi since he started the internship.

“Some editors I’ve worked with are mostly interested in storytelling and their eyes glaze over when I start talking about [the technical aspects],” Hines said. “Jack has embraced the technical topics and has retained the details really well. This will serve him well in the future.”

The two have collaborated on a multitude of projects, one being photography and videography for Paul Quinn College. Rossi has gone on shoots with Minerva, as well as learned how to edit the footage he captures on a deeper, more tedious level.

“Humility and lowering your ego is probably one of the most important skills to have in this very collaborative industry,” Hines said. “I think that working with us has shown Jack that he still has a lot more to learn.”

Rossi is also involved in the school’s award-winning band program. The band rehearses an average of eight hours per week and is required to attend all varsity football games. It also participates in weekend band and drumline competitions starting Sept. 14.

“It’s a big workload and there’s no sugar coating that,” Rossi said. “[Band] doesn’t allow for a lot of free time, but I enjoy what I do.”

Rossi is the student leader of the band’s media team. He works closely with the associate director of bands, Travis Pruitt, to create engaging content that helps grow the band’s funds and image. Rossi is a main contributor to the band’s image online, managing projects ranging from simple social media posts to designing the band’s website.

“Jack takes the lead on many of the social media outreach and fundraising campaigns,” Pruitt said. “He always steps up to the challenge and exceeds expectations. He works well under pressure, meets deadlines and is an effective communicator with his team of student leaders.”

On top of his busy schedule, Rossi is living on his own for the majority of his senior year. Prior to their move, his family decided it was best for him to remain at Hebron until he graduates so he won’t have to move to a new high school right before he leaves for college.

Rossi lives in an apartment where he does all of his school and media work. His father visits weekly, so he still sees his family, but he manages his nutrition, sleep, work and time on his own. His bedroom doubles as his office, where he has monitors set up for his video production and graphic design projects.

“I’ve found that living alone has, in a lot of ways, increased my responsibility and accountability in myself,” Rossi said. “I am able to be responsible and take care of the things I need to do without someone telling me.”

Rossi said he doesn’t get much sleep because he stays up to work on media projects, but often doesn’t notice the time passing because of how involved he gets in whatever he is working on. Even though he rarely takes breaks, Rossi said he loves what he does and that the art of creating videos and visuals to tell a story is something he is truly committed to.

“If you’re passionate enough about either art, a sport [or] a talent you have that you can see a future in and see yourself doing it for a long time, then 100% make it your job, because it won’t be a job, it’ll just be a hobby that you get paid for,” Rossi said.

With college applications season approaching, Rossi plans to apply to the University of Tennessee, Louisiana State University and Oklahoma State University in hopes of pursuing a business and communications degree at one of the schools. He has said he plans to take media-related classes, but since the media production industry is constantly evolving, Rossi said that he wants to major in something that he’ll always be able to utilize and can help him learn how to manage his own business.

“The majority of students don’t know what they want to do in college, and the majority of students who graduate with a degree in a [highly specific] field don’t use that degree,” Rossi said. “But I found something when I was in middle school that I fell in love with and I’ve stuck with it all the way until now, my senior year. I know exactly what I want to do.”