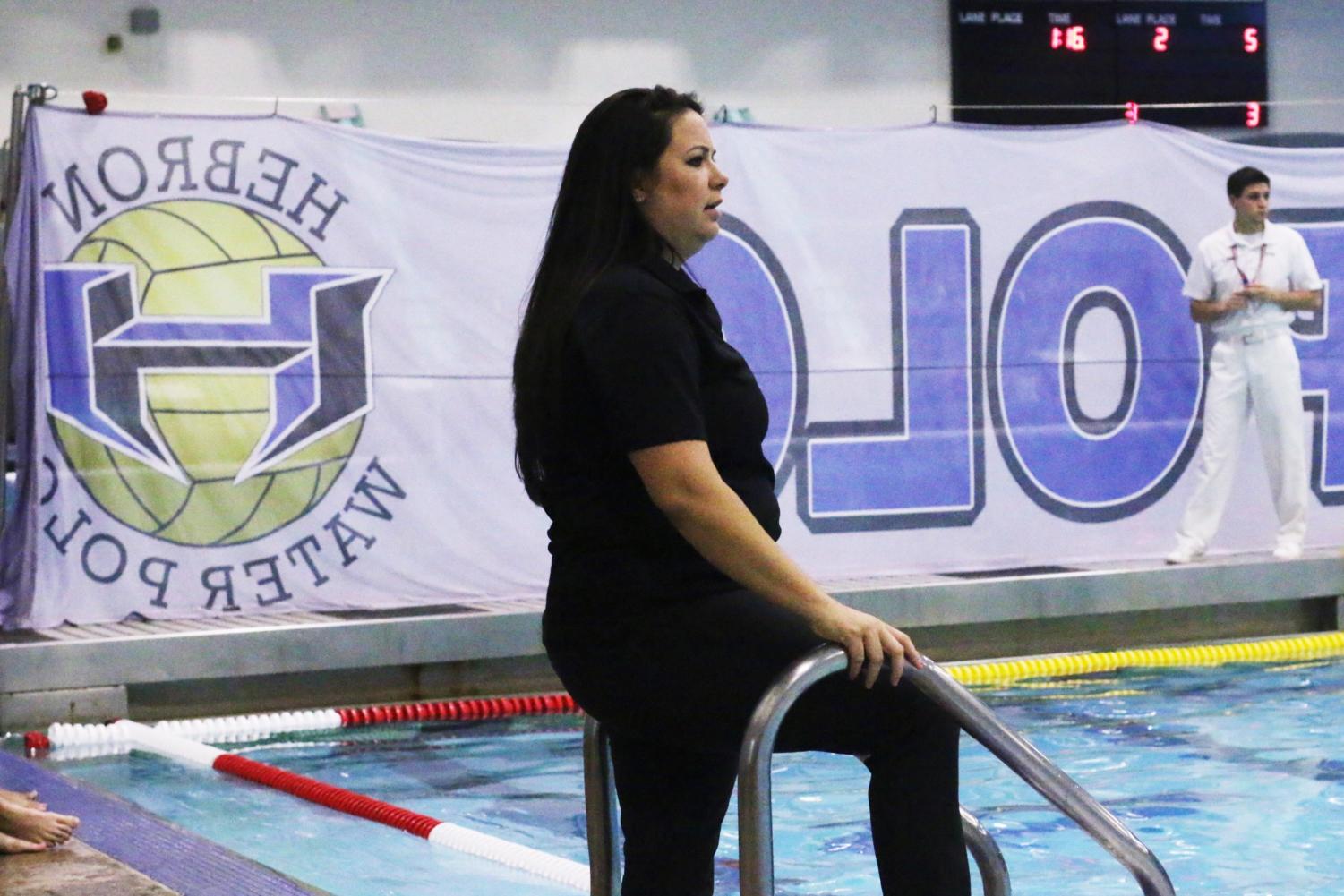 Assistant water polo coach Sarah Carlile watches the JV boys team play against Marcus on Sept. 9 at the LISD East Aquatic Center. Carlile has been involved in the sport since she was a freshman in high school. (Madeline Rivera)

Assistant water polo coach Sarah Carlile watches the JV boys team play against Marcus on Sept. 9 at the LISD East Aquatic Center. Carlile has been involved in the sport since she was a freshman in high school.

The sound of the buzzer rings throughout the indoor aquatic center – time out.

It’s the fourth quarter and her team hurriedly climbs out of the water for a huddle; the air is still and quiet. Water polo assistant coach Sarah Carlile whispers strategies as she clutches a ball, the adrenaline kicking through her veins. A second buzzer rings loudly. Carlile ushers her players into the water after a group chant and glances at the scoreboard: 19-6. Despite an unavoidable loss, the rush of coaching and watching her players succeed keeps Carlile going.

Since she began playing water polo as a freshman at Denton Ryan High School, Carlile has been dedicated to the sport. She initially joined the swim team, but entered preparation camps and was scouted by the water polo coach.

“Water polo is a very physical sport,” Carlile said. “It’s very high [in] demand and [involves] your cardio, physicality and, of course, swimming. I played all four years in high school and in college on the Dallas Masters.”

Carlile played the sport competitively on the Dallas Masters team up until she graduated from the University of North Texas. After graduation, she decided to pursue coaching and became involved in water polo professionally through the USA Water Polo organization.

“Whenever I was 18, right when I graduated high school, I was approached by [a] USA Water Polo developer in the area who was trying to develop water polo [in DFW],” Carlile said. “He’s the one that got me coaching. I’ve [refereed] all age groups [and] I’ve coached a national team for a club called Thunder Water Polo.”

For the last five years, Carlile was head coach of swim, dive and water polo at Denton Ryan. After moving to Hebron for an assistant coach position, she said she believes it was the right choice.

“Denton Ryan is [a] 5A [school and] Hebron is 6A,” Carlile said. “There’s a lot more opportunity to grow as a program [and sport] because there’s more students. [There’s] more resources [as well] because we have our own pool. Denton didn’t have their own pool – they shared with the city, and it gets tight in there with four high schools.”

Water polo and swim head coach Donzie Lilly was the only coach last year during the team’s  club season before water polo became a UIL sport. With extra help this season, Lilly is excited to see what will come with Carlile balancing the weight of coaching all four teams.

“It was very hard [coaching alone last year],” Lilly said. “We have four teams: girls and boys varsity, then JV girls and boys. We would only do weekend tournaments, so I sometimes had [to coach] eight games in one day [alone].”

Carlile and Lilly have coached and collaborated together for their respective club teams, Thunder and Maverick, before Carlile arrived at Hebron. Together, they are planning new strategies and reteaching fundamentals in order to further expand the sport’s publicity.

“I was super pumped [that Carlile was joining Hebron],” Lilly said. “[She’s] a great addition to the team and program. She brings a lot of technical and tactical value for water polo. [She has] good energy, [is] passionate and works well with [both] the girls and boys.”

Varsity goalie Savana Slaughter said she believes Carlile has made a positive impact on the team’s knowledge and overall bond. Last year, Slaughter had no experience with the position of goalie, nor did Lilly. Now with Carlile’s help, she feels more confident.

“It was difficult having one coach,” Slaughter said. “You almost never got one-on-one time with Coach Lilly. [Coach Carlile] definitely created a huge bond with the girls team [especially]. We’re able to go and talk to her about things when we’re struggling.”

Carlile is anticipating the outcome of the first UIL season of water polo as she coaches JV while Lilly coaches varsity, which is due to conflicting game schedules. She hopes for the team to advance to state and claim the team’s first title.

“The leading decision to come down here is to advance with the times,” Carlile said. “It’s a great environment. It’s a great sport. The opportunity to exceed [and] to make it to state – [I’m] doing it for these kids.”